Spurs 2 Royal Antwerp 0; and I was there!

Jose Mourinho said after the game that it is impossible to keep his whole squad happy after his second-string side beat Royal Antwerp. We now have progressed to the last 32 as Group J winners in the Europa League. Hurray!! But there was really no doubt about the result.

As you all know, Mourinho has stuck to a relatively consistent first eleven in the League this season and has been pleased by our current situation at the top.

Some players were rested from the League game for this match, which included Harry Kane and Son, thus allowing players like Gareth Bale, Carlos Vinicius and Harry Wink’s to get a crack at the whip. However, and for the last part of the game and hopefully push our goal tally upwards, Kane and Son were brought on to great cheers from the crowd. Some of the players rose to the occasion, with Vinicius tapping in the opener after the visiting goalkeeper Alireza Beiranv had palmed Bale’s dipping, long-range free-kick on to the post.

Giovani lo Celso was the best player on the pitch, capping his display with a neat finish for the second, laid on by substitute Kane. Others endured an unsatisfying evening, such as Harry Winks, who departed down the tunnel straight after being substituted, and Dele Alli, who did not participate at all and also left the bench briefly after Mourinho had made his fifth and final change. All under the gaze of us 2,000 watching supporters, oh, and the TV cameras.

Mourinho told BT Sport, “I can’t keep the squad happy. I believe they are happy because we are winning, but they’re not happy because they’re not playing. Every player that left the pitch I told them to go to the shower because it was cold. Some decided to go, and some decided to stay. It’s an impossible job to keep every player happy and if you go to every club people who don’t play aren’t happy.”

On the subject of Alli, he added: “Let’s not run away from reality. A player on the bench who realises all five subs have been used of course is not a happy player, and I would not expect him to be happy.”

Alli and Winks have started just four games each this season. 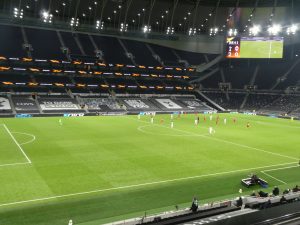 My thoughts on the match.

It was apparent how much more dynamic and dangerous we were when Kane and Son were introduced, resulting in the second goal and the two thousand crowd going berserk, dancing, chanting and enjoying the occasion.

We will now be in the seeded pot for Monday’s draw, which should bring us a more sympathetic tie in the last 32. Antwerp will join us as unseeded group runners-up.

As you all know Antwerp beat a very lacklustre Spurs in our away fixture in October, in which Mourinho made four changes at half-time and voiced his displeasure. In spite of this, we were a better team in our home match, nevertheless, the first half we yielded few chances and little evidence that those on the periphery of the first team were deserving of a Premier League start.

Our second team were able to take the lead thanks to Vinicius’ third goal for us, all of which have come in the Europa League, but it was interesting that Mourinho turned to his big guns almost immediately to ensure that our lead was in no doubt.

As for Bale; we were all glad to get to see him play, which those who went to the Arsenal game didn’t manage. When he was eventually subbed, he was given a standing ovation.

There was a noticeable lift from the substitutions, with Son drawing a good save from Beiranvand before Kane headed just wide from a corner. Lo Celso ensured the win, capping a man-of-the-match display in which he was at the heart of.

Harry Kane has 13 assists in all competitions this season, the most of any player within Europe’s top-five leagues – three ahead of Manchester City’s Kevin de Bruyne with 10.

We recorded six consecutive home wins in all competitions for the first time since December 2018.

Jose Mourinho has won 18 of his past 19 home matches in games played on Thursday (D1), winning all five with us. 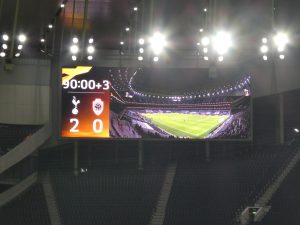 Our next game is against Crystal Palace on Sunday (14:15 GMT).

That is all folks, enjoy, stay safe and see you all soon.

This match report is only part of my time at Spurs. There is a fuller version on my bog, giving details of my trip to the Tottenham Stadium, how it went and much more. To access that blog and read the full version, then click “here”. To comment, you can to do that below or on our Fan Forum, for that click  “here”.