Match Preview: Spurs v Fulham. A win is a must.

In my previous preview (against Wolves) I said we must win. For this match, I am saying roughly the same again. Anymore defeats or draws will push us further behind.

On the positive side, we are in 7th position and on 26 points. That is six points behind league leaders Liverpool… not yet a chasm, but it soon could be if we either draw or lose again. The even more positive news is that we are only 3 pts behind second and third-placed Leicester Tity and Everton. After that, we are only 2pts behind fourth-placed United. Aston Villa and Chelsea are only above us on goal difference. So it is a close-run thing. Please, I am trying to be positive here!

We’ve only lost 3 games at this halfway stage, only Liverpool & City have lost less than us, and we are currently above City. So, in the cold light of day, it isn’t that much of a disaster, but it could be if we lose or draw more games. So it is imperative that we beat Fulham and beat them well. For the record, The Cottagers are in the relegation zone and on 11 points. That is 15 points behind us.

Our only defeats are against Everton, Liverpool and Leicester Titty. The three clubs above us. And they’ve still got to play us. Liverpool are the only club to beat us away in the league, while our defeats against Leicester Tity & Everton were on our own soil. 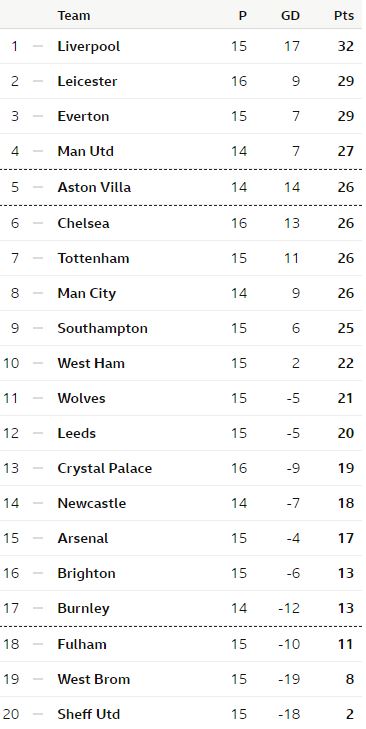 Lo Celso will be absent with a hamstring injury that will also keep him out of Spurs’ new year fixtures. Gareth Bale, who has made just one Premier League start, is out due to a minor calf strain.

Mario Lemina is available for Fulham having been ineligible against Southampton last time out (as he is on loan from the Saints). Terence Kongolo’s ankle injury will be assessed, but Kenny Tete is expected to be available.

We haven’t been on a great run of late (the bleeding bloody obvious), but I see it as a glitch rather than the start of a slide down to hell/ Arsenal territory, and away from the top end of the table.

I am expecting us to do up Fulham up like a kipper and have a goal rush. We are certainly better and have a better squad than the team in 11th position and struggling. Granted, Scott Parker’s side have improved a lot lately, especially at the back, but they still can’t win games. But be warned, even dogs have their day.

We have won 10 of the last 11 Premier League games against Fulham.

Fulham haven’t scored more than once in any of the last 13 league meetings.

The Cottagers have won only three of their 36 away league fixtures against us.

We are winless in four league matches, our worst run since a similar four-game spell between February and June.

Spurs have dropped a league-high nine points due to goals conceded in the last 10 minutes of matches.

We are unbeaten in our last seven Premier League London derbies, winning three and drawing four.

We have had just 22 shots in the second half of our last seven Premier League matches.

We have lost our final league game in just one of the last 11 calendar years.

Only four of our Premier League goals this season have not involved Harry Kane or Son.

Son is one goal short of 100 for Spurs in all competitions.

Fulham have drawn their last four league matches – as many as in their previous 43 top-flight games.

They could go five Premier League fixtures unbeaten for the first time since 2013.

They have only won 25 of their 131 Premier League London derbies.

They have earned four points from their last three away league games, as many as their previous 13 away matches in the competition.

Aleksandar Mitrovic has scored in three of his four Premier League appearances against Spurs.

Well, that is it; you’ve got my prediction, thoughts, statistics and positiveness. What more do you want, other than my body… and that comes at a price… but I am open to offers… Oh, we laughed! Enough of this banter, I hear you shout! So, take care, be safe and Up the Spurs!

One thought on “Match Preview: Spurs v Fulham. A win is a must.”