We are in the Final of the Carabao Cup: Spurs 2 Brentford 0

Hopefully, Mourinho can go one better and do what Pochettino failed to do; win that trophy for us (one of many). Jose reached another Carabao Cup final as we saw off the challenge of Brentford.

I was watching the game on my iPad and at the same time listening to it on the radio. When we scored, I nearly hit the roof, when we scored our second I was doing the duck walk (think Chuck Berry).

As the final will be in April, I hope that by then the virus will have subsided and we are let back in. It would be a terrible final with no fans. It would be even more awful when (no “if’s” here, I have full confidence) we lift the trophy, and nobody is there to cheer our team on. Just think when Liverpool hoisted the league title aloft, it was like a ghost town. Only the ghosts of the dead and TV audience witnessed such low key palaver.

Moussa Sissoko’s excellent header and a brilliant (magnificent) finish from Son were enough for us to book a trip to Wembley. Yes, we are on our way to Wembley, and my knees have gone all… (well, why not). It didn’t help, or maybe it did, but I finished off a bottle of white before the match (perhaps that is our good luck charm, I get pissed and we win!).

As for Brentford, well, their Ivan Toney thought he had equalised midway through the second half, but his strike was ruled out for offside after a VAR check.

I must admit Brentford took the battle to us and were a stern test, but they ended up disappointed, and the knife was stuck in and twisted when midfielder Josh Dasilva was sent off six minutes from the end for a very nasty and bloody foul on Pierre-Emile Hojbjerg.

We are now looking for our first trophy since 2008, and I was there, as I hope to be there this time; now we play one of the Manchester clubs. Who do I want? Well, we’ve played them both, so either will be hard—nobody, who is going to Wembley, will be a pushover.

As for Mourinho, well he has won the trophy on four occasions and is the third manager to reach an EFL Cup final with three different clubs.

Mourinho is good at winning trophies and has won trophies at all the clubs he has been to, this club (our club) is no exception. And this League cup competition has always been a building block strategy for going on to far more tremendous successes. I have faith (and a good feeling) that he will be good for us and the start of another round of those Glory Glory nights & days and our Cockeral crowing like he hasn’t crowed for a very long time.

This is what separates Mourinho from Pochettino, he regards the EFL Cup as vital in making his mark at a new club and giving his players, us, the supporters, confidence and then goes on to more incredible things. Unlike Pochettino, who had no time for this competition or the FA Cup. As I said in my previous article, he should have learnt to walk before trying to run… he ended up leaving the club with nothing, absolutely bugger all. Anyway, he is the past (but I thank him for what he had done for us).

As for Brentford, well, they were a plucky little thing and gave their all, but they failed in their first significant semi-final, but there is no doubt bigger things await this excellent team. They were never outplayed at any stage. Full marks to them! 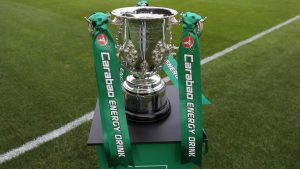 Jose Mourinho, speaking to Sky Sports said: “It’s a game that takes us to a final at – probably, but I hope not – an empty Wembley but of course I’m very happy. We’ve had London derbies and other games but this is the match that took us to a final. The final is now in our pocket for three months. We have to wait for the final so we have to focus on what we have coming up. We have the FA Cup, the Premier League, the Europa League, so let’s forget the final for now. But when April arrives, we have to be ready and to fight for the trophy. The game was always under control. They had the offside goal, when the ball goes in the air you cannot press the ball, you just have to try to get to the first and second ball.”

We have reached our ninth League/EFL Cup final (winning four) with only Liverpool appearing in more (12).

In all competitions, Brentford has never won an away match against us in eight attempts (D2 L6), with their last win against us in March 1948 in a league match at Griffin Park.

For the first time in 17 games in all competitions (W9 D7), Brentford lost since a 2-3 league defeat by Stoke in October.

Moussa Sissoko netted his first goal in 37 appearances for us in all competitions, since scoring against Burnley in the Premier League in December 2019.

Sergio Reguilon registered his fourth assist for us this season in all competitions, a total only Harry Kane (14) and Son (8) can better for the club.

Ex-Arsenal, Josh Dasilva’s red card was Brentford’s second in their past three away games in all competitions, as many as they picked up in their previous 35 on the road.

On Sunday (10th) we are away to Marine, at their Travel Arena stadium and kick-off is at 5pm. I believe it will be shown on BBC TV. Our next league game will be three days later on the 13 January at 8.15 pm. This is against Villa.

Best regards, stay safe and look after yourselves… yes, we are in the Final.