This article was written and published before the Liverpool/ United & City/ Palace games.

First of all, let’s congratulate Ndombele on his brilliant goal. What a kick. This will be one of the goals of the season and rightly so.

Even though it could change in the next hour, we are level on points with Liverpool, and the same goal difference. All thanks to Aurier, Kane and Ndombele. However, Spurs got me going when the Blades scored in the 59th minute. I thought, here we go, Fulham all over again, but we got quickly back on track, and I could breathe more easily.

It is one of those seasons in the Premier League, one minute we are up, then down and everybody else looks like they are running away with it, then those ahead of us all take a set back, and we are back in it. I don’t think anybody can accurately predict who will win the League or even be in the top four this season.  Many Tottenham fans, commentators and all in sundry had written us off after our draw with Fulham. Now we look on in wonderment after our game at Bramall Lane. 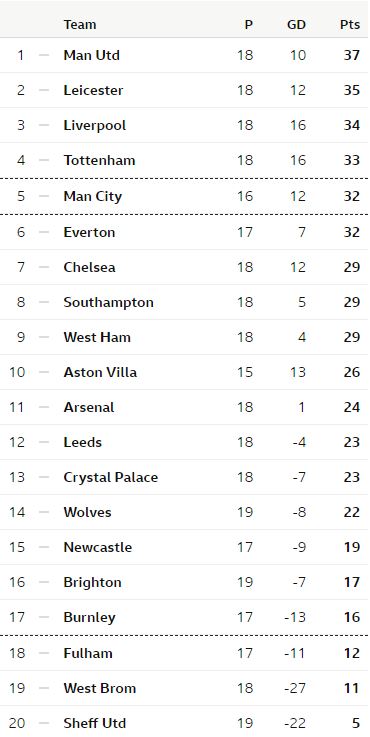 We got our top-four challenge back on track with a comfy triumph against bottom-of-the-table strugglers Sheffield United. Yes, we’ve had a very unsatisfactory run of just one win in our six previous League fixtures. But before you could even say Bob’s your uncle and your aunt fanny is the Queen of Sheba we bounce back from slipping to an even lower position to our ruthless best against a Blades side that had gone into the game lifted by picking up their first league win of the season against Newcastle last time out.

Serge Aurier opened the scoring after 5 minutes with a header from Son’s corner. Then who should pop up in the 40th minutes but none other than Harry Kane.  He scored his 12th league goal of the season just before half-time, driving a superb low strike outside the box beyond their goalkeeper Aaron Ramsdale. What a goal! Two in the bag and smiles all around.

Then half time came, and I quickly took the dog for a walk around the block and arrived home just in time for the second half. Yes, a quick walk, considering… or was that a slow walk, because of my arthritic legs? Whatever way you look at it, I got back just in time.

Fourteen minutes into the second half, Sheffield’s David McGoldrick scored their first to reduce their deficit with a glancing header. Our heads momentarily dropped as we thought this could be another Fulham or Spammers game all over again. But three minutes later, smiles again all around as Tanguy Ndombele scored a stunning hooked finish, I suppose you would describe it like that; basically it finished the Blades off. But we were still sitting there with our fingers crossed as we hoped for another goal that would put us above Liverpool.

That victory moved us up to fourth, three points behind United. Job done… at least for the time being. There is still the United/ Liverpool and City/ Palace game to go, which could change things (league positions). But even if it did make a difference when those games had been completed, we are still in the thick of it and all to play for. And of course, we are in all competitions. It is time to by Merry… or even Susan or Jane… just pick your choice of female names and go with the flow (he says, happily!).  And even if you… no, we are going off track here, I don’t want to over-do it!!!

We drew 1-1 draw with Fulham in our previous outing when we should have won it. Just as we should have beat the Spammers, Newcastle, Wolves, Palace and Chelsea. That is 12 points dropped. If we had these 12 points, we would be far above the rest. They would be chasing us. Luckily for us, the others in the pack also dropped valuable points. Frustration being the name of the game.

No side has scored more first-half goals than us in the Premier League this season (21), while our count of just four conceded in the opening 45 minutes is also the best in the League. Aurier’s early goal was also our ninth scored inside the opening quarter of an hour – another high.

Conceding the late goal against the Cottagers highlighted our need to make the most of our first-half dominance, and we did just that.

At least when McGoldrick’s goal came, we didn’t drop our heads, but got on with it and continued fighting for another.

As for Ndombele’s ingenious strike, well as I said earlier, he ensured that there would be no late drama, as there was for our previous drawn games and of course, what a brilliant goal. We can breathe more easily, at least for now, until we step in the arena against Liverpool, next in the League… but before that, there is a little matter of a FA Cup game against Wycombe Wanderers.

Sheffield United are only the second team in top-flight history to lose 16 of their first 19 matches in a season after Bolton Wanderers in 1902-03, who were relegated in bottom place.

We registered our first away league victory against Sheffield United since December 1975, ending a seven-game winless run at Bramall Lane.

Sheffield United have conceded 15 home Premier League goals this season – as many as the Blades conceded at Bramall Lane in the whole of last season.

Jose Mourinho has never lost an away Premier League match against a side starting the day in the relegation zone (P28 W21 D7).

We travel to Championship outfit Wycombe Wanderers on Monday, 25 January (19:45) in the FA Cup 4th round. Three days later we face Liverpool at the Tottenham Stadium (KO 8pm), in the League.

That is it, my friends… all exciting stuff, well it is if you are winning or in the driving seat, but it has been touch and go for us at times. We should count our blessings that we are still in the thick of it.

Match Preview: Fulham v Spurs (the fight for a top-four spot is on)

Match Report: Spurs 4 Burnley 0 (are we back to winning ways?)