I said we would get three goals or more (yes, I failed in my prediction), but we did win (thanks to Tosin Adarabioyo own goal)… still, we’ve got the three points. That means we are 4 points behind Everton, who are in 4th place. Leicester Titty who are third, eight points above us. All manageable. Well, that is providing that we keep winning and those above us take a nosedive. Next up is Palace, followed by the hapless Brownnosers.

I think Man City will run away with the league title as they are 14 points above Manchester’s inferior parts. As for the Titty cuppers, Toffee chewers, Bubble blowers, Russian bear and the Beatle pretenders, well, they are all within striking distance of the Lilywhites. Since writing this, Liverpool and Villa lost, United and Leicester Titty drew. All contributing to our fund in climbing up the greasy league pole. 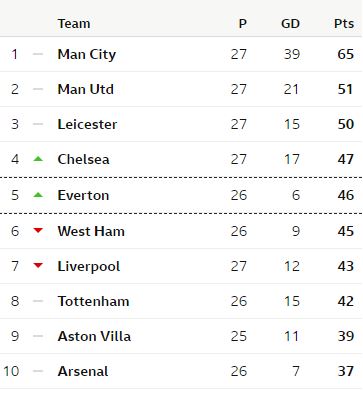 We have recorded consecutive Premier League victories for the first time since November as we survived late pressure from the cottagers at the Cottage stadium. Not since beating Manchester City (then below us) to move top of the table on 21 November had we won back-to-back games.

Making his first league start since the opening day, Dele Alli played a crucial role in our 19th-minute own goal.

Happy Hugo produced a fine save to tip Joachim Andersen’s header on to the crossbar and was again called upon to deny Adarabioyo from the resulting corner as Fulham pushed for an equaliser after half-time.

Fulham were left aggrieved by a controversial video assistant referee decision to disallow Josh Maja’s equaliser just after the hour, as Mario Lemina was penalised for a handball in the build-up despite his arm being by his side. Bad for them, good for us. It makes a change for things to go our way.

Harry Kane was denied a diving header by Alphonse Areola in the closing stages, but we held firm under intense pressure from the cottage industry to move to within four points of the top four.

Alli had not started in the Premier League since being removed at half-time against the toffee makers almost six months ago, but he replaced Lucas Moura in an exciting Spurs front four behind Gareth Bale, Son and Kane.

Mourinho said it was “amazing” to have Alli backfiring following his performance against Austrian side Wolfsberger in the Europa League last week when he scored a superb overhead shot. He impressed with an energetic display during the first half, which saw us click into gear.

As for Bale, well, he also started and was the catalyst for the opener, turning quickly in midfield to set Alli away. Alli drove confidently at the retreating Fulham defence and continued his run into the box to meet Son’s cross, which was heading wide before Adarabioyo’s unfortunate touch.

As for the second half; Alli and Bale were both removed after 67 minutes, and Moussa Sissoko introduced in response to Fulham’s growing dominance. It was far from convincing in the end, but a third win in a week makes for happy reading for us supporters.

After the game, Jose Mourinho said: “It was a tough game. They play very well, they don’t score many, but they don’t concede many either. We had chances to kill it, and we didn’t, and then the game becomes very similar to what we have had in other games. Hugo [Lloris] is the best French goalkeeper and made a couple of saves to show it.”

I feel that we’ve turned the corner (fingers crossed!) of bad results, and hopefully, Mourinho has found the right formula to take us forwards and upwards. I also feel that we’ve started our mojo working just at the right time. Next month we take on City in the League Cup. In between, we’ve got Europa games, plus Palace, the Brown nosers, the Saints, Villa, Newcastle, Man United, Everton and then City at Wembley. Apart from the Cup final game, I think that Everton will be the trickiest out of all those that I’ve mentioned. But all winnable (says he with his fingers crossed).

We have won back-to-back Premier League games for the first time since winning four in a row in November. We had lost five of our previous six league games before this.

This was only our fourth 1-0 win in the Premier League where the only goal was an own goal, but the second to come under Jose.

We have won each of our past six away Premier League games against Fulham, stretching back to the 2010-11 season.

Fulham are without a win in 22 Premier League London derbies and have failed to score in each of their past four.

Fulham have failed to score in eight home Premier League games this season – the joint-most of any side.

We travel to Palace on Sunday the 7th. Kick-off at 7.15 pm. A week later, in the league, we face the diarrhoea boys (arsewipes or brownnosers if you prefer) on the 14th at 4.30 pm.

I should have published this last night (4th), but I had too much to drink, went to have a lie-down and fell asleep; I woke up at 2.30 am. Let that be a lesson to you, drink and work don’t go together.