I said this would be a low scoring game in my preview blog, so I predicted 2-1. How pleasantly wrong could I be. But before we get on to that, let us look at some other results over the weekend that will affect us. Sadly United beat City and got themselves three points, the same with Leicester Titty (beating Brighton). However, an excellent Fulham team pulled off a miracle – or maybe not – by beating the defending league wobbling Champions, the scouse pretenders to the Beatles, Liverpool FC. So, our victory over Palace means we leapfrog the Scouse Pretenders and the bubble blowers and go to sixth in the league. We are one point behind the Toffee chewers, plus we’ve got a game in hand over them as well. Two points behind the Rent Boys in fourth and eight points behind Leicester Titty in third. And we’ve got a game in hand over them as well—all exciting stuff. On top of that, we have an inform Bale and a squad raring to go. 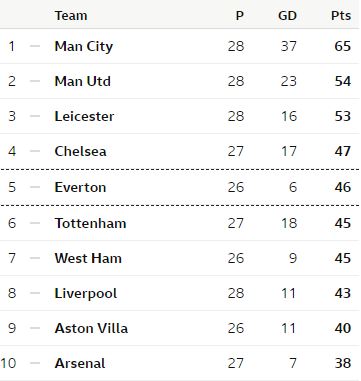 We may have been knocked out of the FA Cup, but we are on all cylinders to reach the Europa League Final and we are gradually climbing up the sticky league table. Oh, and I haven’t even mentioned the League Cup Final (oh, yes I have, just now!).

To the Palace game:

Bale and Kane both scored twice to inspire us to our third consecutive Premier League win at the Eagles’ expense. Bale had Kane to thank for both of his goals. He opened the scoring with a tap-in from Kane’s cross and headed in a superb second with Kane’s help.

However, after the Bale goal, Christian Benteke had drawn Palace level with their first effort on target, with a header from Luka Milivojevic’s cross, which resulted in a goal for them. But that was where Palace’s luck stopped, in the second half, Palace were unable to cope with our firepower.

As for Kane, well, after playing the role of provider, he opened his account for the evening with a curling 20-yard effort into the top left corner and then dispatched Son’s cut-back to register his 24th goal of the campaign in all competitions. That goal rounded off a fine display and brought up a notable landmark; Kane and Son now having combined for more goals in a single season than any other two players in Premier League history.

This result lifts us up to sixth in the table, and we are now just two points off a top-four place. As for Palace, they remain in 13th and eight points above the relegation zone.

On Monday, Chelsea play Everton, and on Sunday, when we play Diarrhoeas, United take on the Bubble blowers.

In the first half, we played well and should have scored more than one. Palace’s goal was unfortunate. However, in the second half, we were even better than the first. Bale is going to be our strength in this team, providing we can keep him injury-free. No doubt Mourinho will use him sparingly. I thought Jose was wise to take Bale off in the 70th minute and replace him with Lamela. Even taking of Kane was a wise precaution.

We have the third-best goal difference behind the two Manchester pencil-pincher-squeezers.

I must say, our march forward has been impressive. When we had last met the Eagles (13th Dec), we were top of the Premier League table. Even though we faltered with seven defeats in a 12-game spell on either side of Jesus’ birthday, the manner of our performance against Palace will have delivered a stark warning to our competitors for European places. That can be attributed to the attacking players we have; Lucas Moura, Son, Kane and Bale were all influential throughout our victory over Roy Hodgson’s boys.

I must also give a mention to Moura’s energy. His persistence caught out Milivojevic, allowing Kane to tee up a relaxed opener for Bale.

As for Bale: he now has six goals in his last six appearances and looks rejuvenated and in excellent form, right up to his withdrawal in the 70th minute. He may be 31-years-old and approaching his twilight years, but he exhibited his superiority – with glorious switches of play and shows of activeness, most notably when he towered above Cheikhou Kouyate to score his second goal of the game.

We also mustn’t forget Kane’s selfless display and exhibition of clinical finishing to deliver two or more goals and assists in the same Premier League game for the club since Jurgen Klinsmann against Wimbledon in May 1998.

While we are on the subject of Palace, I would also like to mention a significant connection they have with us. In 1951 we won the league Division 1 title for the first time. Our manager then was Tottenham, born Arthur Rowe. He managed us between 1949 and 1955. He then left because of poor health. Five years later, he came back into football to manage Palace for two years. He also had a playing career with us as well. He played 182 games between 1929 and 1939. I met him a few times. The first time I met him, according to my dad, was when he was the manager at Palace. I then met him a few years later and managed to have a chat with him. He died in 1993 at the age of 87. He will go down in Spurs history as the first manager to bring us the League title.

After the game, Jose Mourinho said: “They were good goals. Harry Kane’s first one was magnificent. We played good football. It looks silly to say, but I’m happy with the goal we conceded. My feeling in the 10 minutes of the first half was that if we finished 1-0, then maybe we would start the second half the same way. We lost a little bit of the hunger and desire to attack. We were too passive, we were in control. We made one mistake and conceded a goal. So I had a positive feeling when we conceded. In the second half, we had to go with everything. Then it was the feeling that a one-goal difference is not enough, and then we made it 2-1 and went for 3-1 immediately after. I was happy with the attitude, the feeling and naughty smile of scoring 100 goals in the season, and we are a defensive team. It was a good week for us – three matches, nine points, no injuries, and everyone is coming back. We are in a positive moment.”

Only league leaders Manchester City (35) have earned more points at home in this season’s Premier League than us (24).

Our fourth goal was our 100th in all competitions this season, becoming the second club in Europe’s big five leagues to reach that tally in 2020-21, after Bayern Munich (106).

Crystal Palace manager Roy Hodgson has failed to win all six of his Premier League meetings with Jose Mourinho (D3 L3). The joint-most he’s faced a particular manager in the competition without winning (level with Jurgen Klopp).

Crystal Palace’s goal was from their very first shot of the match and their only shot on target.

Gareth Bale has scored in each of his last three home appearances in all competitions, the first time he has done so since September 2018 for Real Madrid (four in a row), and the first time for us since May 2013.

Harry Kane has been directly involved in 40 goals in 36 games in all competitions for us this season (24 goals and 16 assists), the most of any player for a Premier League club.

Harry Kane and Son have now assisted one another for 14 Premier League goals this season, breaking Alan Shearer and Chris Sutton’s all-time competition record of 13 set in 1994-95 for Blackburn.

We face Croatian side Dinamo Zagreb in the first leg of our last-16 tie in the Europa League on Thursday, 11 March (20:00 GMT). Our next Premier League game comes when we travel to the home of Turd & Tonics for a north London derby against the men from the planet Uranus on Sunday 14 March (16:30 GMT).

An eventful evening for us Spurs supporters. The team seems to have their confidence back while the other teams are starting to wobble all around them. But we mustn’t get complacent. It has been a weird season, but let us hope it is all uphill from here.

On a personal note; I am getting my COVID-19 jab at Reading FC’s ground this Friday (I live 30 minutes away) and the next on the 28th of May. The quicker everybody gets it done, the faster we can get back to normal and watching our team live again. Be safe, Glenn