Before the game, I was apprehensive and thought the game could go any way… but we won (with an own goal to help us win). Are we now on a different path, or will it be the same old, same old Spurs?  Our next game will be away to Newcastle, and even though they are languishing 2nd from bottom, that has never stopped somebody in the bottom three humiliating us. I suppose it is a case of watch this space.

Bossman Nuno said his players were “unstoppable” when they are confident after seeing them return to form in a much-needed Premier League victory over Villa. A bit too late for the Palace, Chelsea and Arsenal games, however, the good news is that we are only 3pts behind Liverpool (in 2nd) and 4 points behind Chelsea, who are at the top of the perch.

As I said, we were destroyed by the Gooners and took a sucker bunch against Palace (was that because we had a player sent off or putting out the wrong team?), and then there was Chelsea. However, against Villa, we overcame a wobbly start to give a display that – may not be perfect –  but was defensively organised, and we seemed to have got our attacking mojo back (to a degree).

For me, Son was the best player on the pitch, providing two assists, and as for Lucas Moura, well, he looked razor-sharp in places, and Harry Kane was more involved in the final third than he has been previously this season.

Pierre Emile-Hojbjerg got our first goal (he saved us against Rennes) and an own goal from Matt Targett, who shot the ball home under pressure from Moura just four minutes after Oli Watkins had equalised for Villa in the second half of the game.

Nuno’s comments after the match: “We are aware we have been through a tough moment. When the players gel and combine, they can do very well. We have to find the balance between the defensive and attacking part of the game. All the players did well, we have talented players, and when they are confident, they are unstoppable.”

“We needed a win but a well-deserved win,” he inserted. “We did a good match against tough opponents. Important for us, the boys and the fans. We reacted well after conceding and [were] positive in a lot of ways. The boys did well. Villa are a very good team with the press, so it was about taking risks. Our front three were always in the middle. They played well.”

But that wasn’t the whole story, as we had many chances to kill the game off but failed to convert good chances.

Emiliano Martinez save denied Kane his first league goal of the season. He has now failed to score in his last six League showings.

All this means we finished – before the international break – in 8th position, but not far from the top four. It is a beginning, and may it continue… but we are talking “spursey” here. Not a name I like, but it is up to the team to shake that word off and put it to bed, and only a combination of Nuno and Levy can do that (I won’t be holding my breath). But my Spurs optimism is starting to come back… I just hope it is not dashed again like on previous occasions.

Nuno also turned his attention to us, the fans… “The fans, the support, what they give us today is huge. It is really important, and we are very thankful.” And so they and the board should be, the amount of money we put in, in the hope of seeing glory days and nights back again.

Let me remind you, all our three wins, which we began the season with, were achieved by a single goal. So, more goals, better defence, and we could be looking downwards (enjoying the view, like we did at the beginning of the season) instead of upwards.

As I had said above, I thought Son was our best player, and Villa’s manager concurred. “Outstanding Son was the difference”.

So, that is my two pennies worth… I am not jumping up and down just yet… or even if we get a few more wins under our belt… but by the end of the season, and a few trophies in our possession, a top-four place, then I just might!

As for how the day developed; I got to Spurs at 9.30, a cup of coffee and into the Spurs shop, then to the entrance to the stadium, waited in the queue and then the whistle for 11 o’clock and the unlocking of the doors, through all the usual hoops, saw Shannyn (pleasant surprise, as she used to be our accounts manager, now promoted within Spurs), then saw Hannah (our current accounts manager), chatted then for a pint and a roast dinner (in a Tupperware container… not the beer, though) and waited for the others to trickle in… then… Bob’s your uncle and aunt fanny was just that… 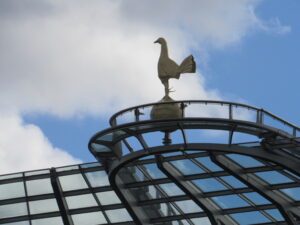 Next up for us – besides the International break – will be a trip to Newcastle, another away trip, but much further afield, Holland (Europa Conference League) and then our group have been invited to watch Ipswich Town play on Saturday by one of the directors (of Ipswich) and then the Spammers the following day (at their Meccano stadium). All in the life of a Spurs supporter! Don’t you just love the club and what it can offer (misery, elation, tears and Daniel Levy! Lol!).