We face Manchester City in the Carabao Cup on April 25th.

Manchester City beat their Manchester rivals, United, to reach the Carabao Cup final and now will face us at Wembley as City hopes to win the competition for a fourth straight year. However, if we have any say in the matter – and we will – then it will be us, not City that walks away with the spoils.

Second-half goals from John Stones and Fernandinho secured City’s place in the final.

City could equal Liverpool’s record of winning the League Cup four times in a row if they beat us on Sunday, April 25th. But as I said, we are not going to roll over and lay down, oh, no, we have a fighting spirit and have an excellent record of knocking out City in Cup competitions (Champions League, one example). It will be a first final meeting between Guardiola and Mourinho since 2011 when Mourinho was in charge of the Real Madrid side who denied Barcelona the treble by winning the Copa del Rey.

The only other time we’ve met City in a final was in 1981 – I was there (both times) – we drew the first, but we were victorious in the replay. 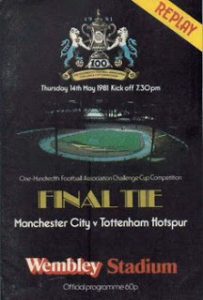 The first match (Cup Final) took place on Saturday, May 9th 1981 at Wembley and finished 1–1 after extra-time. Right-winger Tommy Hutchinson gave Manchester City the lead at the half-hour mark, and they were cruising towards the title before the same player got his name on the score sheet again with an own goal eleven minutes from the final whistle. There were no more goals in extra time as an FA Cup final went to replay for the first time in eleven years. Even though we walked away disappointed, we had a great day out and was looking forward to the replay.

The replay was played on Thursday night (May 14th) and was a totally different game. We won it 3-2, with the hero on that occasion was one Ricky Villa. And it was a very memorable goal. In fact, world-shattering. His goal was flashed around the world.

As good as three of the four goals were in this final, they would be overshadowed in the 76th minute during one of world football’s most memorable moments in footballing history. Galvin broke out from his own half along the left touchline and found Villa, who was almost 20 yards away from the goal. Advancing into the penalty box, Villa swerved past Cayton and Ranson with a body curve. With four City players closing in, he pulled back slightly and dismembered the gap between two of them. He took two more touches before rolling the ball beneath an advancing Corrigan. This goal was a brilliant, distinctive strike. We were mesmerised by Villas smooth jousting. He scored, and I think it was a few seconds of realisation, then we hit the roof with screams, shouts of joy, grabbing whoever was beside us and either hugging them or high fives. This moment of happiness seemed to go on for hours but probably was only seconds.

Ricky Villa’s wonder goal knocked seven bells of shit out of the Manchester City side, and their players were almost in a stupor in a matter of minutes. Near the end of the game, City had several chances to pull level, but two long-range efforts from Tueart went wide. Our hearts were in our mouths. Finally, the whistle went, and we repeated all over again our crazed excitement. Was the Ricky Villa manoeuvring through the opposition the best we had ever seen? Of course it was (well, certainly one of he best)!

This season we played them at our ground and outplayed them and won 2-0. So, we will learn or take no lessons from Guardiola’s henchmen. They will fear us more than we fear them. In fact, since Mourinho has taken over, we’ve grown in status and have shown more confidence and have that killer instinct. We are more clinical than we used to be under Pochettino.

So, we face City at Wembley, but before that, we come down to earth to face little Marine AFC from Merseyside in the FA Cup on Sunday. Then we brush our selves down and prepare to do battle once again in the Premier League were we face Aston Villa.