In my previous article (match preview) I said, if we lose this then that is it. Is it time to throw in the towel where the title race is concerned? Both United and City are pulling away at the top. I can’t see Liverpool this season winning the league, United isn’t good enough, and the others are too far behind. At this point in time, my money is on City. But being an optimist, there is always hope!

Now we must fight for a place in the top four. By my reckoning, 10 teams are fighting for three positions. 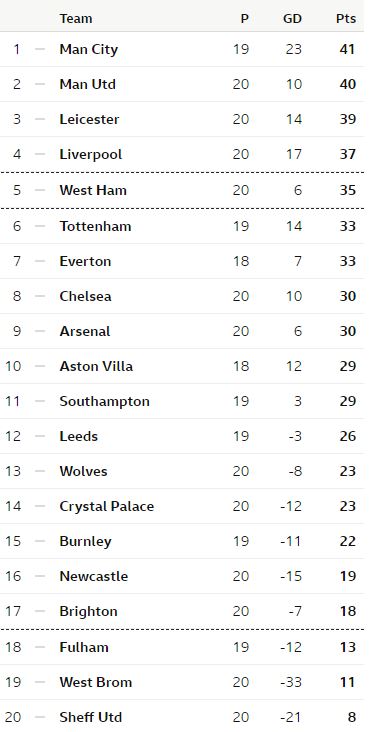 Apart from Højbjerg brilliant goal in the 49th minute, we were poor. Of course, it didn’t help that Kane went off injured, but why not bring on Bale and Vinicius? What is the point of having a striker sitting on the bench for when Kane gets injured and then Mourinho doesn’t use him? So much was riding on this match. Personally, I think this was down to team tactics. Mourinho has a lot of explaining to do.

Liverpool reignited their title defence, at the same time all but ditched our hopes. We’ve ended our five-match winless run in the Premier League with the Reds dominating us. Their Roberto Firmino tapped his team ahead on the stroke of half-time when Hugo Lloris and Eric Dier hesitated. Alexander-Arnold got the second before Hojbjerg’s got his brilliant stunner. When Hojbjerg scored, I thought we could turn it around, but alas, it wasn’t to be. Mane scored their third goal to win and move into fourth.

As for us, we stay sixth, seven points behind league leaders City. Even hapless West Ham are still above us. And to top it all, Kane was withdrawn at half-time as a result of an ankle problem. You just want to cry. Then there are Everton, Chelsea, Arsenal, Villa and Southampton only a few points behind us. If we don’t pull our finger out of our arse, we can easily slide beneath these terrible five.

As far as I could see, Jose Mourinho spent much of the second half screaming instructions at the players in the hope of instilling some fire in them. Either they didn’t listen to their master strategist or didn’t know how to turn what he was saying into something constructive. Whatever Mourinho’s bouncing up and down was meant to achieve, in the end, it did no good as the players continued giving a lacklustre performance.

Right from the start, Liverpool carried the more significant threat once Son’s early finish was ruled out by VAR. But it was a moment of hesitancy between Dier and Lloris that opened the door for Firmino to get their first goal.

Son occasionally threatened on the break, but even after Hojbjerg’s brilliant goal from the box’s edge, it still failed to inspire his teammates, who looked barren of ideas long before the final whistle.

But as I said above, why-oh-why didn’t Mourinho bring on Bale and Vinicius? Last season we were crying out for another striker, now we’ve got one he stayed sitting on the bench. As as for Bale, he couldn’t have done any worse, so why not give him a chance?

In our first game against Liverpool this season I thought both teams were close and they only managed to win in the dying minutes of the game. This time around, there is no excuse.

The other question people are going to ask; how long will Kane be out for?

Liverpool have now beaten us in the top-flight on all seven days of the week, becoming just the third side to have done so after Everton and West Ham

Jose Mourinho has now lost six home league games in charge, more than he has at any of his previous clubs

All three of Liverpool’s Premier League away wins this season have come in London, with the Reds also winning 2-0 at Chelsea in September and 7-0 at Crystal Palace in December

Firmino has scored in five of his last six Premier League appearances against us, including each of his last three away from home

Pierre-Emile Hojbjerg’s strike was his first goal for us in all competitions, his 30th appearance.

Well, that’s it on, nothing really much more to add. Stay safe and all the best, Glenn

Match Preview: Fulham v Spurs (the fight for a top-four spot is on)

Match Report: Spurs 4 Burnley 0 (are we back to winning ways?)