They were there in full force to protest that they wanted ENIC out (the owners of our football club). They came with placards, boards and anger… they wanted their club back, and they were determined not to let up!

Yes, Tottenham supporters vented their hostility towards ENIC and especially chairman Daniel Levy as they gathered at midday on Saturday “as part of weekend of peaceful protests” outside our magnificent stadium. But it ain’t going to end there either, oh, no, other protests are set to take place at Spurs in the coming weeks, months and years ahead, including one before our Sunday’s home game against Wolves and another before the final home game of the season against Aston Villa on Wednesday; where there will be 10,000 fans walking past their hostile brothers, who will be shouting “out, out” and holding up placards. “Maybe a few of the 10,000 returnees will give them moral support.

The “Out Enic” brigade’s anger towards the owners, particularly Daniel Levy, has intensified following the club’s involvement in the failed European Super League. And this wasn’t the first time, as there have been many other such protests against ENIC and Levy. In fact, those protests started well before the European Super League was even a twinkle in the six famous renegade Chairmen’s eyes.

But it isn’t just Spurs fans that have a bee in their bonnet over their club; there have been protests by Chelsea, Liverpool, City, Arsenal and United fans against their club’s owners as well since the Super League fiasco last month when the other  ‘big five’ clubs also signed up to a breakaway league. 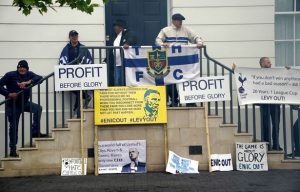 The Spurs supporters began to arrive outside the stadium at about 12 noon.

Most, if not all, came with flags and placards, while banners were hung from railings bearing slogans such as “£NIC out. Profit before glory” and “To dare is too dear – ENIC out”. One banner read: “If you don’t win anything, you have had a bad season” – Bill Nicholson. 20 years. 1 League Cup. Levy Out”. If you don’t win anything means you’ve had a bad season, then we’ve had 20 years of bad seasons under Daniel Levy.

Spurs supporters have endured 20 years of disappointment under Levy (only winning the League Cup in 2008), and we’ve just had another disappointing season and look set to miss out on Champions League qualification again.

Since the anger of the European Superleague and poor quality on the pitch, the club tried to placate the fans by announcing they would add a fan representative to the board.

But the ENIC out-group are not the only ones who are at loggerheads with the club and Levy, the Tottenham Supporters’ Trust are annoyed with the club for not consulting them over the Super League (at one time, they were given assurances that no such deviation from the norm would be contemplated without the Trust being consulted). 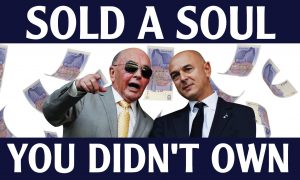 Daniel Levy won’t give up his Empire, and the supporters’ groups won’t give up their campaign against him, either.  It is going to make for some exciting times ahead. This will give writers like me plenty to write about and the fans to talk about. Who will end up kowtowing to the other?