We’ve gone from the European Champions League to the Europa League to Europa Conference League within three years. What next for the season after?

Under Pochettino, we kicked above our weight, but through a lack of underfunding by Levy & Lewis, we started to drop, and he was eventually sacked. Replaced by Mourinho, who got us into the Europa League (just), he was suddenly replaced (before a Cup Final), by Kid Mason, who has taken us even further down the league table (7th), which sums us up our season nicely. Thanks, Levy!

But thanks to Kane, Schmeichel and Bale (two goals from Bale), we got the European booby prize and at the same time stopped the Foxes from getting a Champions League place. All in a day’s work and a season of failures.

Who is going to take over from Kid Mason and work under Levy’s dictatorial leadership? Which fool is out there? Or will this be a big wake-up call for Levy & Lewis, and that they start to realise that the only way up is to heavily invest in the team and compete on the same level as Chelski, the Scousers and the two Manchester clubs? The Gooners have dropped down the pecking order and are now under us… as last season. They are now an irrelevance (at least for the time being).

To the last match of the season:

We denied Leicester a place in the Champions League for the second season, with Gareth Bale scoring two late goals to give us victory. At the start of this game, Leicester knew that their best hope of finishing in the top four was to beat us. While hoping that the Scousers and the Russians slip up. In the end, the scousers won, the Russians lost, but they kept their fourth spot because the Foxes were humiliated in front of their home crowd. Even though Chelski tried to help them out by losing to Villa, the Foxes were unable to play their part and beat a muddled Spurs side that have struggled on and off all season.

Thanks to Bale hammering home the final nail in Leicester’s coffin that we went ahead for the first time in the 87th minute… then 9 minutes later (in extra time), he got another one. We were finally SMOKING, and Leicester were truly buggered!

But let us be honest, if it wasn’t for Kasper the Ghost Schmeichel – and we owe thanks to him – it might not have ended that way.

Could this be the end of the road for our great talismanic striker? Does he want to play in the third tear of European failures football, or would he rather play in the Champions League with one of the Manchester clubs… or even with the Russian team? Or will Levy force him to stay by overpricing him so the other big spenders will be forced to back off? Levy is a cunning so-and-so and will do whatever it takes to get his way.

The goal that Kane got was enough to get him the Golden Boot-winning tally of 23 goals for this season’s campaign. Another reason why he might want to go, to be appreciated.

Then again, he might be happy to have another season at the club he supported since he was a boy because of this new competition; the Europa Conference League – his reward for helping the club to seventh in the league. Will this be enough for Kane? Well, that remains to be seen, but somehow I don’t think so!

Bale and Mason and the end?

The Foxes game may also be the last for Bale, who ended his loan spell from Real Madrid in an impressive fashion. And then there is Kid Mason, who will probably go back into the shadows while the club considers numerous candidates as a permanent successor to Jose Mourinho.

And if Bale and Kane don’t return next season, will others also leave? 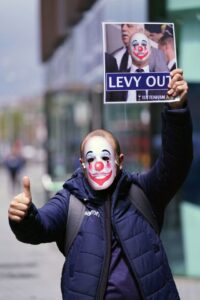 What next for the team?

Well, this is going to be an exciting summer. Unlike the Foxes and probably other teams, we have enormous changes ahead of us.

The last time we finished in seventh place was way back in the 2008/9 season.

It wasn’t that long ago that we believed we deserved giant status and a place in the Europan Super League because we were part of the English elite six. How we have fallen… we are not even good enough to be in the second tear of European Football, the Europa League; no, instead, we’ve just qualified for the European failures section in UEFA’s new Europa league conference. If it wasn’t for UEFA creating this new competition, then we wouldn’t even be in Europe. So thanks to UEFA’s genius for making this European failure section so that we can save some of our blushes.

Also; Levy has to appoint a new manager

And then there is the new manager for Levy and Lewis to think about. Get it wrong, and we could end up being a lot lower than 7th. Maybe if that happens, UEFA could create another tear of failed-failed positions.

Sadly, Levy hasn’t got a good track record of appointing any sort of half-decent manager… just failed ones.

We also mustn’t forget that the Wet Spammers finished above us and in the Europa league… I bet they’ll have a smile on their faces. I just hope Levy isn’t thinking of David Moyes?

The states for both teams

Since Leicester’s promotion in 2014, their 14 Premier League meetings with us have seen 54 goals scored; since 2014-15, the only fixture to witness more goals in the competition is Arsenal v Liverpool (58).

Leicester’s Jamie Vardy has scored two penalties in three different Premier League matches (all this season) – only Steven Gerrard has done so in more different games in the competition’s history (four).

Harry Kane has scored 15 goals in just 12 Premier League appearances against former club Leicester; in the competition’s history, only Alan Shearer (20 v Leeds and 16 v Everton) and Les Ferdinand (16 v Everton) have scored more times against a single side.

That is it, folks… the last game of the season… let us hope next season is a considerable improvement… with some trophies thrown in (I say that every season!).

I won’t be going away, as there will probably be plenty to write about over the coming months.