Pochettino: a wise decision or a stupid mistake?

I know you can’t believe everything you read in the Sun, as the saying goes, but that doesn’t mean they haven’t had exclusives that didn’t turn out to be true. Anyway, the Sun (and other papers, such as the Independent) have reported that Mauricio Pochettino is considering returning to our club this summer, just 18 months after being sacked and replaced by Jose Mourinho.

The report in the papers claims that our Chairman, Daniel Levy, is currently trying to encourage Pochettino to leave his post at PSG, even though he has only been there for half a season.

While at PSG, Mauricio has won two trophies in his short time at the club. This is one more than Levy has managed in 20 years in charge of Spurs. Not only that, but he just lost out to Lille in the race for the title and was knocked out of the Champions League at the semi-final stage. The Sun continues in their piece by saying that Pochettino is unhappy at PSG and would therefore love another chance at the club that sacked him, which is why he is earnestly considering a return.

But cunning Levy believes that it could also be the “ace card” that keeps Harry Kane at the club for at least another season.

If he does come back, it looks like Levy is prepared to eat humble pie. According to reports and my source, Levy has supposedly admitted that sacking Pochettino was the worst mistakes in his career, and he has made some clangers over 20 years as Chairmen. On the other side of the coin, the Argentinian has told close friends that he would be prepared to leave PSG for Spurs as soon as possible.

However, all this has tickled a former Spurs legend who hopes that what he has read is true. Graham Roberts has made his feeling known on Twitter.

Roberts took to Twitter after hearing the suggestion that Pochettino might come back by posting three ‘praying’ Emoji’s to give his view and support on the possibility of Pochettino’s return. This was under a photo of our former manager going ecstatic over our semi-final win over Ajax in 2019 (I was there). 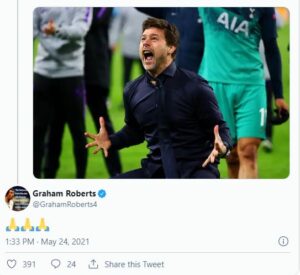 A tricky one because he left as a failure (no trophies) in five years managing the team. However, how much is this down to Levy being tight-fisted? And if he comes back, what will change? Sacking again in another couple of years (which Levy does)? And he will be sacked again unless Levy changes his approach to his transfer policy.

If he comes back, it will be like the two of them (Levy & Pochettino) doing so with their tails between their legs.

To be honest, Pochettino would be better than some of the names suggested as our next manager (Parker, Martinez, Mason etc.), but not as experienced as others (Rogers, for example).

Pochettino, while at Spurs, had made some bad decisions (in players, substitutions and ignoring players he has fallen out with, showing no interest in the League & FA Cups etc.), but all that could have taught him an important lesson (in other words, so long as he has learned from his mistakes). But then again, this could be all a Sun/ Independent collective hoax to get fans going and to sell more newspapers.

But what are your thoughts? Would you want him back?

2 thoughts on “Pochettino: a wise decision or a stupid mistake?”