Klinsmann was the man; now Sonny is.

Our old mate (marmite Levy) could encounter transfer problems where Sonny boy is concerned. Agree or disagree, Jurgen Klinsmann believes otherwise (that is if you disagree), as he believes we could lose Son if his partner goes for brighter lights.

Those who are old, like me, or frequently watch old re-runs of Spurs games, will know who Jurgen is. He joined us under Alan Sugar’s successful period (well, more successful than Levy). And in his first game for us, he dived… along with a host of other named players (a well planned choreographed event) into the media and Spurs fans hearts. Anyway, back to the plot. Klinsmann has urged our chairman to avoid selling Kane at all costs, otherwise, we could lose Son as well. As we all know, Kane has been linked with every Tom, Dick and Thomas’ club out there (well, those that can afford Levy’s price tag). But the favourites to get his signature is the team that hoards all the trophies, yes, you’ve guessed it, City, the blue half of Manchester.

Daniel Levy is said to be vehemently opposed to the idea of selling Kane and has slapped a £200million price tag on him to frighten off anybody who might be interested. But don’t underestimate player power in the modern game. So, depending on Kane (and whether he wants to show his teeth), Levy just might be forced to give up his prized possession, but not without a fight.

Klinsmann scored 34 goals in 63 appearances for us.

Klinsmann told Sky Sports that he can understand Kane wanting to leave for trophies. However, he implores Levy to leave no stone unturned in finding any way to resolve Kane’s unhappiness. He said, “I feel sympathy for both sides, especially Harry, who has been the flag of the club for so many years,” said Klinsmann. “He’s done so much for them. The market is out there for him. Teams would grab him right away, and they’d probably put down a lot of money. I personally hope he stays at Spurs, but I also can understand him. I was in that situation in 1995. I badly wanted silverware, and it worked out that way. I went to Bayern Munich and won the UEFA Cup and German championship. If Harry leaves, then you have a problem because maybe Son says: ‘Hang on, I might move on as well then’. The most important path now is [for Spurs] to sit down with Harry, discuss the situation and lay out how he can continue his career with Spurs, how the roster will look for next season to make the squad even stronger. The quality is there. It needs a bit of fixing up, but the key figure in all this is definitely Harry Kane. You’ve got to do everything possible to keep him.” 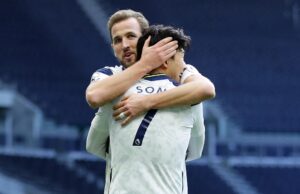 Kane and Son have become a prolific partnership, scoring a combined total of 55 goals in all competitions, which is just for this season.

I don’t know if anybody noticed, but the pair shared a long embrace after beating  Leicester City on Sunday. Both seemed very emotional… maybe, they think it will be the last time they see each other? Who knows! I have no doubt that Son is upset and concerned over losing his partner and friend.

I can see Son leaving if Kane goes. Maybe whoever buys Kane Son might be purchased by the same club. Whatever happens, Daniel Levy must start to rethink his philosophy where Spurs and money are concerned. In Twenty years of overseeing the club, he has only managed one trophy and now seen us slide down the league table. And if it wasn’t for a new failure-teams-Europa-Competition, we would be, just like Arsenal, out of Europe.

As we are talking about Klinsmann, there have been rumours circulating that he might be our next manager. Better than some names mentioned, but not as good as others. But we shall wait and see.

What are your thoughts on the subject?