Send in the Clowns: do we want failure back?

Yes, the manager that was sacked because he was a failure the first time around (no trophies) and probably will only last a couple of months in his current job might be on his way back so that he can team up with another failure (at least while overseeing the team on the field), in Daniel Levy.

Levy has been lording it over a team of failures for 20 years and in that time only won one trophy, the League cup in 2008. And Levy has a history of picking failures, sacking them and putting another failure in his place.

I was listening to Ole Gunnar Solskjær the other day saying that players were purchased to win trophies. Chelsea, City and Liverpool have said similar things, where at Tottenham, players are there to help enrich Levy and the board even further. And if by a fluke we should win a trophy, all the better… at least it will pacify the docile fans.

Anyway, the news is that the club have made contact with failure Mauricio Pochettino about returning to the club and probably to see if he can build on his failures and take us even further down Alice in Wonderlands rabbit hole.

Talking of Alice in Wonderland… I wonder if Daniel agreed with Alice’s sentiments when she said, “Why, sometimes I’ve believed as many as six impossible things before breakfast”?

I probably can even quote her when the Tottenham fans heard the news that the failure might be back, “Curiouser and curiouser!”. But I would go with this, where Daniel is concerned “It takes all the running you can do, to keep in the same place.” And Levy likes to stay in the same place, as he has been doing so since taking over the club (I am talking about the club/ team and not about the gold mine he created to pay himself, the board and investors even more). 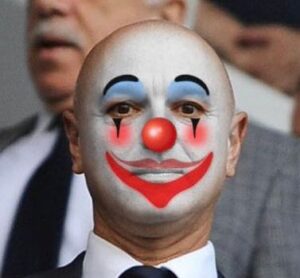 Pochettino was sacked by Levy in November 2019 after five years in charge, took over at Paris St-Germain in January, and now they are not happy with him, as Levy wasn’t, but Levy wants him back… what a circus we’ve become. It reminds me of that song “Send in the Clowns,” only that the clowns have been here since 2001.

Under Pochetino, PSG failed to win the Ligue 1 title for only the second time in nine seasons and lost to Manchester City in the Champions League semi-finals. At least their standards are high, where Levy isn’t interested in trophies and is quite happy for us to fall down the league table… well, he must be if he wants failure back. And who employed Jose Mourinho? What the hell is going on at Tottenham?

Let us remember why failure was sacked in the first place. After a disappointing start to the 2019-20 campaign, he was sacked because Tottenham had fallen to 14th in the table (at least Mourinho did better when he was sacked). We had been knocked out of the League Cup by Colchester United (I was there) and beaten 7-2 in the Champions League by Bayern Munich (I was there as well).

Chairman Daniel Levy recently said the club “lost sight of some key priorities” during its construction and the Covid-19 pandemic. And he still wants failure back. What? So we can lose even more sight of our priorities? And what priorities are they, Daniel? More disappointment?

Further down the league table? Enriching himself and the board? That Pochettino took us to a final, which isn’t what he is about, so he had to go? As I said, what are those “priorities” Daniel? Indeed, the priorities that Ole Gunnar Solskjær believes in or as the other big five do, or even clubs like Barcelona, Real Madrid and every other big European clubs believe in, don’t seem to be ours?

The problem for Levy and his cohorts is that after so much negativity around the club, an incapability to secure Pochettino for a second time will look like a failure on top of the club’s history of failure under Levy. Then there is Kane, with that situation unanswered, Levy needs to bring some kind of stability to the problem; whether that includes his prevalent, popular failure or not remains to be seen.

Where Levy is concerned, it reminds me of that popular song of the ’60s, Shame and Scandal.” Maybe Levy sang it, and the words become part of him? Who knows!

“But stop,” I hear some of you shout, “What about when Pochettino kept us in the top four or we got to Finals?” What about it? And what trophies did we win under him? And is that our only goal, getting into the top four? No, it should be about winning trophies, not some leftovers. And don’t forget that Pochettino wasn’t interested in the FA or League Cup but wanted to aim for higher things… which he never reached. Poch, old boy, learn to walk before trying to run. Then, after all that failure, he took us downwards. Do we want that back again? I say, no!

Let me finally end by quoting Bill Nicholson, “If you don’t win anything, you have had a bad season.” Exactly what Ole Gunnar Solskjær and the other big 5 say, but not Daniel Levy.

What do you think, bring back the failure? Or go for a more robust manager this time around, breaking Levy’s past cycle?

6 thoughts on “Send in the Clowns: do we want failure back?”