Book Review: Tottenham greats (My Eyes Have Seen the Glory!)

A new book that has just come out and is capturing the football book world (including the Tottenham book world) by storm, is called “My Eyes Have Seen The Glory.” It has interviews with 40 great Spurs legends of White Hart Lane. It is written by Toby Benjamin & Alan Fisher. And it has a forward by the great Gary Mabbutt MBE. And you can’t get anything more prestigious than Gary Mabbutt writing a few words to indorse this great book.

Speaking personally, I have seen all those mentioned in the book and what great servants to the club they have been over the years. To be regarded as a great club, you need more than just a stadium, manager and those behind the scenes, and not forgetting the trophies… oh, and those Glory nights and days. You need great players that have stood on the shoulders of other Spurs giants of the past that have graced the White hart Lane pitch and shown their magic footwork and skills.

As it says at the back of the book: “forty legends of White Hart Lane from the double era to the modern-day relive [and you do relive that era as you open each page], in their own words, what it was like to play for, play against, watch and manage the mighty Spurs”. Just writing that sentence made my knees go all trembly. Good old Ossie! And yes, he is also featured between the pages.

This exceptional and fantastic new book has assembled the largest-ever group of legends interviewed about our great club. Players like Cliff Jones, Alan Gilzean, Micky Hazard, Glenn Hoddle and the list goes on.

The book is broken down into sections (Contents); The Bill Nicholson era, Burkinshaw era, Scholar & Venables era, the Sugar era, and the Levy era. But that isn’t all, there are articles about and interviews with Julie Welch (famous journalist & Spurs supporter), Morris Keston (a Superfan), Mike Varney and much more. I don’t want to give too much away here. It is for Your Eyes to See the Glory once opened and devoured by yourselves.

Now I bought the Limited Edition (which is still available), but if that is outside your price range, you can go for a more moderate version (at a price that will be comfortable to your pocket).

Throughout this book, there are pictures of those legends and an artist impression of some players. And that artist, who drew those pictures and is featured throughout the book, is none other than the legendary Paul Trevillion. Not many have gone higher up the art ladder than the renowned Paul Trevillion, I can tell you, for your pleasure.

To give you an example, on page 252 (the page number might be different in the standard book), the legendary Micky Hazard is featured. It tells us that he made 170 appearances for Spurs, scored 25 goals, won the FA Cup in 1982 and UEFA Cup in 1984, plus runners up medal for the League Cup final in 1982.

In the book, two of many questions, Micky Hazard is asked “What are your memories of Bill Nick”? and “which Cockney team-mates took the Mickey out of the Northern lads the most?” and there are many other exciting questions. I will not spoil your pleasure by revealing what he said here, other than say, you will smile, feel joy (lovely woman) and go through many other different emotions as your fingers turn each page of this wonderous book.

If you are young and not entirely up with the club’s history, then be prepared to be dazzled by some of the great names that put the heart into White Hart Lane.

There are 458 pages to amaze you (the non-Limited Edition will probably differ).

The book is presented to you by Mooney & Lambert (ML) and Agent Fox Media (who you will know better as Rick and Beverley Mayston). All genuine Spurs fans, so you know that their souls and love were put into this book, that has been presented to you.

Micky Hazard is interviewed about the book (My Eyes Have Seen The Glory) by the renowned Simon Dee of today, Ricky Mayston (of Agent Fox Media); click link below.

Click “HERE” for Micky Hazard interview about the book

If you are real Spurs fans, you can’t go much wrong in purchasing this incredible montage of great Spurs players as you take this authentic trip down White Hart Memory-Lane (in more ways than one).

Just glancing through the book myself made the hairs at the back of my neck stand up; just imagine what happened when I actually read it (orgasmic shock waves rippled through my body…. phew!) 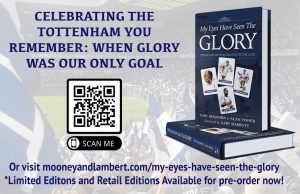 PS enjoy your journey through the book’s pages.