The Russians are coming and want… Harry (yes, Abramovich is coming)

According to the well-known sports journalist Gianluca Di Marzio, Harry Kane is the Russians number one striker target. They plan to do whatever it takes to get him, money being no object. Manchester City, Manchester United and Chelski have been interested in Kane ever since his dissatisfaction was noted in the press and has made no secret of his desire to win the big trophies (which will never be the case while Levy is the Captain of the ship).

Manchester United seem to be out of the picture as the Red Devils extended Edinson Cavani’s contract and look set to make a big splash on Jadon Sancho.

It had been no secret that City had became the favourites to get his signature, but now that seems no longer the case. The Blues would love nothing better to get one over on their London rivals.

Chelski had been linked heavily with a move for Erling Haaland, but the journalist Di Marzio has now claimed that Kane remains Chelski’s number one target over Haaland, with club owner Roman Abramovich favouring a move.

However, Sky Italia has reported that City are ready to also offer clash plus Aymeric Laporte and Gabriel Jesus to convince Levy to part ways with Kane, but Levy has stood firm so far. 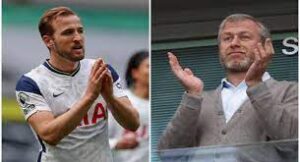 Kane has said that he wants to stay in England, but Levy doesn’t want him to go to an English club. However, if push comes to shove, I am sure he would want Kane to go to City than Abramovich’s Russians. If he did go, it will get the backs up of our supporters and could create an even more hostile environment for Levy and Lewis.

Some commentators have speculated that Kane won’t go this summer, however, I think it will also depend on who our next manager is. Our next appointment will send a message to our fans, the players, and the world how serious we want to win trophies. If it is, as expected, Paulo Fonseca, a not a big hitter on the world stage, it might tip Kane and a few others to move on.

If Kane stays, he will be 28 the following summer (and because he has suffered from injuries) by then, it might be too late, and he will be stuck here to the end of his career with nothing to show for it.