This is the 10th classic game I’ve been to in my series of articles of great matches.

Jermain Defoe scored five goals in the Wigan thriller as we annihilated Wigan 9-1 at our old White Hart Lane ground to move into fourth spot in the table.

This was my last season at my then-current home before moving and settling down to village life. Not that I knew I was going to move at the start of that season, but circumstances came, and I moved (after 30 years, to the day, I moved house). If an opportunity comes your way, you’ve got to take it, which I did. Leaving 30 years of memories behind.

There wasn’t much happening that year or the following year, music-wise, at least not for me. The TV programme The Bill had about another year to go before the plug was pulled on the show (it had been going for 27 years). Also, at the beginning of that season, London mayor Boris Johnson made a cameo appearance in BBC One soap EastEnders. The episode was watched by 8 million viewers. I wonder what happened to him? In October, the British National Party leader Nick Griffin makes a controversial appearance on Question Time, after being invited onto the show by the BBC. The edition attracts eight million viewers. This was twice the programme’s usual audience. The programme also resulted in a large number of complaints to the BBC. Griffin, himself, made a formal complaint to Auntie (that is, the BBC) for the way he believes he had been treated on the show. But I bet they (the corporation) was smiling all the way to the bank and TV viewers figures. That is the only two worthwhile news events worth reporting, that I can remember. To others, a lot more probably happened. I suppose it all depends on one’s age and mental faculties.

As I only had my dog to worry about – I left her with a friend – I travelled early up to the ground (by car). Then I was a season ticket holder to park in the School opposite. I had been parking there several years (before that, I could park opposite the ground for free). John was in charge, and he was still there right up to the very last game at White Hart Lane. After that, he was let go, and Tottenham took over the management of the school/ car park…  Anyway, if I remember rightly, there was a lot of activity outside the ground (for kids and adults), such as trick football shots, food stalls, ladies painting fans faces… you know, the usual ones you get when visiting the old White Hart Lane stadium. After a quick look around, to the pub, I went, then to the ground, through the turnstiles and then sat and waited, for hopefully a thriller. But thrillers don’t usually happen that often; sometimes it ends up a damp squib, other times there is something to shout about, while more often than not, just tears. On this occasion, we got the fireworks and the smiles all in one match.

Defoe was the shining light of this amazing show as he notched five spectacular goals as we recorded our biggest ever win in the Premier League. Peter Crouch started the massacre in the first half before we ran riot in the second half with Defoe grabbing a seven-minute hat-trick (that was in the 51,54,58 minutes) and then adding two more to his tally. The fourth was in the 69th minute and then an 18 minutes wait for the 5th (87the minute). Wigan’s Paul Scharner pulled one back after one of our players appeared to have handled the ball. However, the breather was short-lived as Aaron Lennon got in on the act with a goal on his return to action before the unfortunate Chris Kirkland saw David Bentley’s free-kick end up in the net. Niko Kranjcar completed the landslide in the closing seconds with a stunning finish to send our fans into ecstasy and cement our incredible result by securing a top-four spot that season. 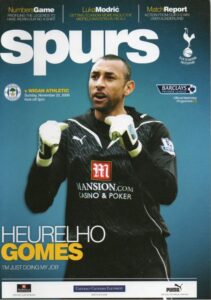 This battle was played on a Sunday following an agreement between Spurs and Wigan so that the players could rest after the international break. Defoe seemed the freshest of the players on display by seizing his goals in the second half. It took his tally to 15 for us and England that season, and it means we scored more than five goals in five matches during that campaign. They were also Defoe’s first goals since his stupid dismissal against Portsmouth the previous month. Harry Redknapp, our manager then, went ape shit when Defoe was sent off and criticised him for his foolish actions.

Croatia midfielder Kranjcar was on the other flank, meaning that Redknapp could ditch his recent diamond formation. Robbie Keane was on the bench following his World Cup efforts with the Republic of Ireland the previous week. Wilson Palacios, making his first appearance against Wigan since leaving the club in January, started the move for the tenth-minute opener by supplying Lennon on the right, with him sending over an excellent cross between their goalkeeper Chris Kirkland and centre-back Titus Bramble. Crouch was at the back post to head home. Lennon almost added a second instantly after creating the opener, forcing Kirkland to save the shot on the rebound after Boyce cleared off the line to stop Defoe. Kirkland also saved from Palacios with a fingertip touch after a 25-yard drive, while Wigan’s response was a shot from Mohamed Diame that went miles wide. Wigan had not won a game in London since 2006 when they defeated the Hammers.

Tom Huddlestone came close with an energy shot that nearly hit Kirkland’s post. Wigan kept pushing, looking for the counter-attack; finally, Jason Scotland forced our goalkeeper Gomes to save at the near post after former Spurs player Erik Edman fed him the ball on the edge of the area. Charles N’Zogbia also went close with a twisting shot and got closer. It was to no avail. They were thoroughly beaten and left the pitch deflated, knackered and humiliated.

So there you have it—a great result.

That season Wigan finished 16th, two places off the bottom, while we finished in fourth, behind Chelsea, who won the league, followed by United and Arsenal.

Harry Redknapp had become our manager the year earlier and stayed four years before the prospect of allowing the England job vacancy go to his head (which, in the end, he didn’t get… just the sack from Spurs). After leaving Spurs, he becomes manager of QPR, followed by the national coach of Jordan (for a very short while), followed by Birmingham… another brief stay. But he is credited for starting the ball rolling for getting us into the top four and Europe.