Our club has decided against pointing another hopeless case. Yes, Gennaro Gattuso was supposed to have been considered a worthy manager until our fans hit the roof and voiced their concerns/ fears on social media. This is according to the well established web-based magazine, The Athletic. The fans jumped, and Levy cowed.

As reported by Glenn Renshaw, incompetence is oozing from our club over trying to find a replacement for Mourinho. In fact, the road to incompetence started with the dismissal of Pochettino; ever since he said we needed to buy, Levy panicked, cried and stomped his feet, and the road downhill became a slippery and tricky slope for the Board and Levy. And that is behind the scenes. On the field, it was no better, as we started to slide down the Premier League table; in the process, we nearly missed out on a place in  Europe, along with our fellow strugglers, the Gooners. If it wasn’t for UEFA creating a third tear European football competition for those that failed to get into Europe proper, because they were too small fry to get otherwise.

Yesterday (17th), Gattuso had emerged as the leading contender to succeed Jose Mourinho after reports emerged yesterday that Levy had opened talks with the Italian after their plans to appoint Paulo Fonseca broke down. Then our fans went loopy, and a large section took to Twitter with the hashtag #NoToGattuso trending in the UK. Levy took his eye off the deflated ball, jumped, and the Spurs supporters, along with the football world, shook their heads in sadness. Some wondered how such a great club could have sunk so low and dishonoured themselves in twenty years of Levy’s reign.

Opposition began after alleged controversial previous comments came to light once again by the former Fiorentina boss involving women in football, same-sex marriage and racism. Because of this, there was no way Levy could have ignored this and played the hard man. He capitulated/ collapsed like an ice cream in a heatwave.

It does beggar the question, why didn’t Levy and his henchmen do a background check before even entering into talks with this guy? 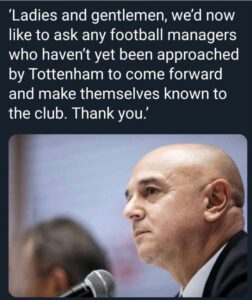 This has got to be one of the biggest PR cock-ups in Tottenham’s recent history. The only other time I can think of where there was such a huge scandal –compare to this fiasco, it was minor – was when Tottenham entered the Wembley stadium in the 1987 Cup Final against Coventry, only to find that half the players’ shirts didn’t have their sponsors name on them. But, as I said, this was minor compared with what Levy is doing.

On Thursday, Levy ended talks with former Roma manager Paulo Fonseca in favour of Gennaro Gattuso. Fonseca is understood to be stunned by the progress, with negotiations reportedly so far advanced that discussions had taken place about potential signings.

The Tottenham Trust joined in and said, “We can and do communicate supporter sentiment to the decision-makers at the club and have done so very clearly on this occasion. We are aware of and acting on your concerns around potential managerial candidates.”

Earlier in June, Levy had also been in advanced talks with former Inter Milan and Chelski boss Antonio Conte while also trying to persuade their former manager Mauricio Pochettino to leave his role at Paris St-Germain. And they weren’t the only ones being lined up like ducks in a row and then as quickly shot down.  It is now nearly two months since Mourinho was sacked after 17 months in charge, but the Levy show continues like all good circuses. 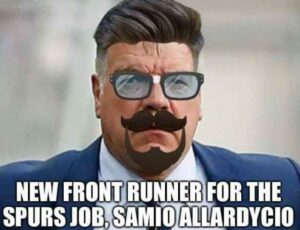 I think it was Glenn who said in his piece, “They don’t seem to know their Uranus from the mouth of the equator. A total shambles.” I couldn’t have put it better, myself. I’ve even talked to people who work at Tottenham, and they are all shaking their heads in amazement. Some just feel embarrassed, while others keep their heads down, hoping it will all blow over. While some are saying – privately – that they hope that Joe Lewis hurries up and sells the club.

Reading social media, the majority are critical of Levy and the Board, while some Ostrich like supporters are trying hard not to blame Levy and pointing to the “brilliance” he has done for the club; stadium, cash cow and “it will all get better, soon… but what we mustn’t do is criticise the club” (WTF?). Without criticism, all that is left is subservience. The supporters are the true backbone of any club, not businessmen like Levy, Lewis or Roman Abramovich, who are there to milk their club for their own glory and financial worth.

One thought on “Fan power and Levy cowed?”