In a previous article, I mentioned Roberto Mancini as a possible manager for us; now, Mark Lawrenson has done the same and questioned why Roberto Mancini is not being linked with a move to our club.

We’ve gone through a few managers since starting the search, and the last two managers we looked at, Gennaro Gattuso and Paulo Fonseca, were potentials and then quickly dismissed, we are now back to square one.

There is a famous quote, “With thousands of roads before us that lead nowhere, going in circles. There really are only two roads we will either travel, one going to heaven, or the other to hell.” We can guess which one Levy is trying to get to!

We’ve mentioned a couple of names that I think would be a disaster, like Roberto Martinez and Gareth Southgate (I certainly wouldn’t want them to be our manager); Mancini has not been linked with the vacant role but has a good record in England.

The former City boss has revolutionised Italy since taking over in 2018, with a 74.29 win percentage during his time in charge. In the Euro’s Italy have won all three of their group games playing some free-flowing football and have been the most impressive team in the tournament so far. “Free-flowing football,” isn’t that what Levy is looking for?

Like myself, Lawrenson insisted that the Italian should be on our list, given the fact that he has Premier League experience. He Told Off the Ball: “The other thing about Mancini is why isn’t he being mentioned for the Tottenham job. He’s the only manager I know who’s not had a mention. Why hasn’t he been mentioned? Uncle Tom Cobley have all been in there. And he’s doing a fabulous job. He’s managed in the Premier League and we know what he’s done, so that’s a little bit of strange one.”

He has played for Bologna, Sampdoria and Lazio and was on loan to Leicester City in 2001. 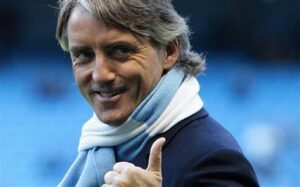 I think he would be a good acquisition, however, like Conte, he would be too ambitious, and I have no doubt that Levy doesn’t want that as it would mean investing in the team, that is why Conte was turned down. The current crop of managers that Levy is looking at wouldn’t be great catches (or too inexperienced), nevertheless, they could be easily controlled and paid very little.

For a young manager – like Potter or even Parker or Mason – they could use Spurs as a stepping stone to something more challenging and who would be serious title challengers (which Spurs won’t be for a long time, if ever under Levy).

2 thoughts on “I share Mark Lawrenson views over a manager.”