The Love triangle: Nuno & Jose (is better than a Levy one)

OK, I wouldn’t actually call it a love triangle, probably a more affectionate triangle. Nuno Espirito Santo admitted that Jose Mourinho had a significant influence on him while playing at Porto.

Wednesday, the 30th of June, was the day that Tottenham announced the arrival of our new Messiah; yes, Nuno was confirmed as our head coach, 72 days on from the club’s decision to sack Mourinho. Which was a world record (only joking, but I am sure it was some sort of Tottenham landmark… then again, maybe not!).

Daniel Levy has promised fans a return to attacking and entertaining football, irrespective of what ideas the new coach has in mind. So rightly, many supporters have questioned if Nuno is the man to deliver  Levy’s sworn promise, chiefly given the pragmatic approach he has often employed during his time at Wolverhampton Wanderers. I am not suggesting that he will or should follow how he instructed his players at Wolves, but he must decide, based on the players he got and the results he believes he could get. The objective should be trophies and wins, not to please Levy’s cockeyed view of management. Levy is a businessman, not a footballing god, which, up until now, has overseen one trophy come to the club. Besides, you employ somebody to do the job they are employed to do, not do what Margaret Thatcher said she would do when John Major took over, “I shall be a good back street driver”.

What concerns some Spurs fans is that Mourinho seems to have been an important mentor for Nuno. And to be honest, that isn’t a bad thing to have somebody like Mourinho as your mentor. If you think about what Mourinho has achieved through his career and the trophies he has collected

The “reliable” Sun paper, which likes sniffing out stories to wind people up, has revealed that even though Nuno was a reserve goalkeeper at Porto and made only six appearances in two years, he enjoyed playing under Mourinho. In an interview with Sky Sports in 2018, he said Mourinho taught him how to win football matches and trophies.

Nuno’s words about his mentor: “When you speak about Jose Mourinho, personally he has an impact on me. Because I was a member of the [Porto] squad in 2002-2003 and 2003-2004 at Porto. That will stay forever. When you have someone that manages, coaches you, and you follow, and you believe, and you do everything that you can because you believe in that idea in your leader – that stays forever. That is the impact Jose Mourinho had on me. I think with every member of that squad, he taught us how to win so that will stay forever.”

As you see, Mourinho clearly had a significant effect on Nuno, but I don’t think Spurs fans should have anything to worry about as I am also sure that he also leant lessons on Mourinho’s failures and will be his own man. 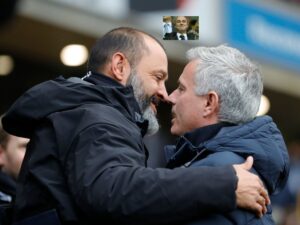 My thoughts on the matter

I would judge Nuno on what he does at Tottenham and not by any previous influences he has had. I also believe, or hope, that he will do what is best for the team and not what Levy thinks is best.

As for attacking football; when he was at Valencia, and with the players he had, he showed some flair and attacking style. As I said, he will look at the team, look at what Levy has provided him and act on that and not what the master wants. Where Mourinho was good was in defence, and that is no bad thing. Yes, attacking football is needed, so long as our defence isn’t forgotten. Nuno is an ambitious man and will do what he thinks is best for the team and his reputation. And leave Levy alone to worry about his own reputation (which has dwindled in the eyes of some Spurs fans over the years).

We must all back our new coach.