What a weekend: Skywalk, meal and Spurs women & men games

Yes, what a weekend. It all started with me going to London on Friday, and in the evening I went with Hanna to do the Spurs Skywalk.

Got to Tottenham early, visited the Spurs shop and then went to queue for the Skywalk. We then had to change into protective gear. But because of a thunderstorm, it was nearly cancelled. But half an hour later, we were allowed to go.

First, you were given a safety talk with a video to watch. Then we were on the move, up a steep ramp with safety hooks attached to the side rail. Once up, we had an amazing walk/ view until we got to the Spurs Cockerel. Everybody reached out to touch it (small things, or big things please certain minds), then professional photos were taken.

Our phones had been taken away from us (for safety reasons) however, once at the top, we were given them back (briefly) so that we could take our own photos. Then we gave them back to the guide. Luckily the rain held off. I didn’t do the sky abseil, so a steep walk back down (which was more difficult, as I have arthritis in the foot and knee). The whole episode took about 45 minutes. I certainly would do it again. After that, then to the Spurs shop for the professional printed out photos. Which I had previously booked and paid for. Hanna also enjoyed her time. Among our group (climbing up the Skywalk) was a couple from Blackpool, Spurs, Arsenal, and a few other denominations. All friendly and chatty.

There is also parking nearby, which you can purchase for £6.50. So we went by car. Once it was all over, a quick trip back to Goodmayes (where I was staying) and then a couple of glasses of wine.

Left Hanna’s at 9.30 (Hanna didn’t go). Arrived at the stadium at 9.30 and had to wait until the Spurs shop opened at 10. Did some shopping; bought a Spurs rug, a programme, a Tottenham puzzle and other stuff. Sadly no X-L away shirts, which I thought was pretty bad and lost sales.

Met my friend Steve at the Premium entrance. Because his friend Peter was too ill to go to the match I was invited by him to the Spurs Restaurant (which he pre-booked). Had a fantastic three-course meal. Then chatted to other friends, made some new friends. Then Met Liz and Tim, with Janet joining us. Brilliant meeting up with old friends, which I missed because of the lockdown.

Kick-off at 2pm. I was sitting next to an Arsenal family, but we had a pleasant talk, very friendly. Obviously, they weren’t happy with how things turned out (except the woman’s match, but they didn’t stay for that).

Son scored in the 79th to give us a 1-0 win over our Arsenal rivals in an energetic friendly on Sunday.

This victory and Son’s goal (with thanks from Japhet Tanganga) ensured we finished our preseason groundwork with a brilliant victory in front of 25,000 supporters (why they couldn’t allow more when only a week later there will be a full capacity!).

It was the final match in The Mind Series between us, Arsenal and Chelsea. We drew with Chelsea 2-2 at Chelsea on Wednesday after Chelsea had beaten Arsenal 2-1 at Emirates Stadium last weekend.

As for Kane, he was absent but to be honest, we didn’t really need him as we achieved our goals in our preseason matches.

Nuno named a strong line-up with Hugo Lloris returning in goal and Son leading our attack.

Nuno Espirito Santo said of Kane: “Harry is with us… I will speak with Harry probably as soon as possible because he is already at [Spurs’ training ground where he is isolating]. Not today; today was the day of the match, but we have a training session [on Monday], and with social distancing I will hopefully speak with Harry.” But according to the press (if you can believe them), he has already agreed on personal terms with City. But then again, read another paper, and you get something else.

On Cristian Romero (our new player), Nuno said: “He didn’t train yet with the group, it is true. He finished the last game with a problem. It is much better now but we have to be very careful first, not take any chances. Like all the players, [Giovani Dos Santos] didn’t have many sessions, Hugo [Lloris], we have to manage a lot of aspects until we decide to put the player on the pitch. But he is here; he looks good. When he starts training in a normal way, he will become an option.”

Back to the match: Son shot wide from the edge of the box in the sixth minute and should have scored 10 minutes later when side-footing straight at Bernd Leno after good work from Lucas Moura. Arsenal’s Alexandre Lacazette began to inspire things and tested Lloris with a 25-yard shot which he turned behind before hitting the post with another effort from a similar distance.  Alli was booked for a late tackle on Nicolas Pepe, however, we creating the best chances.

Son teed up Alli as he arrived in the box, but he could only hit the post from close range.

One of the interesting moments – right in front of me – was when Pierre-Emile Hojbjerg and Arteta exchanged words of anger early into the second period after the former came close to colliding with the latter as he attempted to keep the ball in play. Arteta poked his finger into Hojbjerg’s chest as he had argued that he was out of his technical area. This caused referee David Coote to come over and intervene.

Kieran Tierney and Xhaka were booked for late challenges before we hit the woodwork again just before the hour mark. Davinson Sanchez flicked on Son’s free-kick from the right to the far post where Alli tried to turn it goalwards, but he hit the upright again.

Going back to the European Championships final, we saw three black England players get racially abused (one of them was Arsenal’s Saka). Our fans ceased their panter for this Arsenal game by warmly applauding Arsenal winger Bukayo Saka onto the pitch. He was introduced in the 63rd-minute for his first outing since he missed a penalty in England’s Euro 2020 final defeat to Italy last month.

We always looked the more likely to score against an inferior Arsenal side. They hadn’t won a game in this Minds London competition, a competition that excluded all other London clubs.

Eric Dier clipped the crossbar with a late free-kick, which condemned the Gooners to their second consecutive preseason defeat.

Arsenal begins their Premier League campaign on Friday night at Brentford while we host Manchester City next Sunday. On paper, Arsenal have the best chances of winning out of them and us. But you never know (surprises often happen in football). 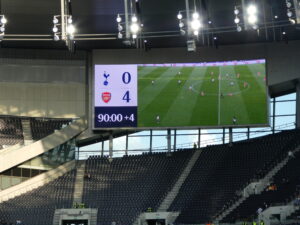 After our victory over the Gooners, a poor Spurs ladies side lost 4-0 to Arsenal Ladies (which kicked off at 4.45), but to be fair, it was a friendly (we did have a few standout women, though). By the time the ladies came on the pitch, most of the 25,000 crowd had left, leaving a few hundred spectators.

Today I went out with my daughter and grandchildren on my actual birthday (9th), overall it has been a great weekend. So, if I come over as somebody who is pickled, then you know why.