Match Report: Wolves 0 Spurs 1 (4th in the table and undefeated)

This was the first Away game I had been to since the Leipzig game in March 2020 (I did, however, go to the League Cup Final at Wembley). And what a day, what a result and what a great atmosphere it turned out to be. It was a real good feel factor, and of course, the friends I met again. Those that don’t necessarily sit near me at the Tottenham Stadium, but I only get to see at away games.

I started the day going to the gym in the morning and then back home, shower and waited for my friend Mel to pick me up. Then a two-hour drive to Birmingham, only stopping for a coffee. Once parked, we made our 10-minute walk to the stadium, picked up programmes and then bumped into Rick and Beverley. Said hello to all the Tottenham Security team – which I got to know over the years (at away matches) – and then through security  (and it was bloody quick, just going through the motions to say they’ve done what they’ve been paid to do) and met more friends inside. Got something to eat and drink, more chatting, and then made my way to my seat. Handshakes all around (from more friends).

The usual razzmatazz before the game (flames being shot out of burners) and the usual pitchside interviews, and then we settled down.

The news that quickly went around the stadium was that Kane would start on the bench, so the Wolves supporters decided to sing songs about Kane going. We responded with “He’s one of our own” and “Yido”.

The waiting was nearing its climax, with the players coming out with loud cheers from our fans and boos from the opposition supporters. Then the referee put his lips to his whistle, blew, and we were off.

I must admit, I predicted we would win 4-1. Yes, over-optimistic, but why not… we/ I was still in the feel-good mode (from the City game)… and we did win… just… but not by that score. 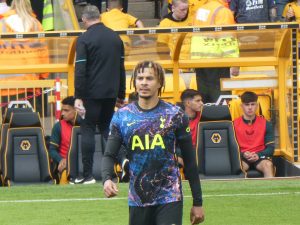 To cut a long story short, Dele scored his first league goal in 17 months, and Harry Kane made his long-awaited return from his extended summer break as we continued with our 100% start to the season (in the Premier League). And that penalty proved that was all we needed to overcome a pack of Wolves in their den.

Some say that Wolves were unlucky not to come away with a point; the same could be said about us, that we could have, should have, scored more, but what is important is the actual score, not a hypothesis.

Their Adama Traore caused us problems but wasted a string of chances for Wolves; one, in particular, was when he was sent through by Ruben Neves, only to shoot straight at Hugo Lloris. In football, it is also about luck. To quote the Jazz legend, Duke Ellington, it is 20% talent and 80% luck. And it will be that combination that will get us into the top four. On that subject, our group of WhatsApp users have put a bet on that we will finish in the top four. £50 each. Delusional or astute? I won’t mention that we had a bet on for last season that we would win the league (but, say no more… as delusional does spring to mind :0().

As I said above, we believed we could justifiably say that we should have won by more. Their keeper Jose Sa made four excellent second-half saves, including one to deny Kane (which would have been a sensational goal if he had scored).

But It was a day to remember for Nuno Espirito Santo. While at Wolves, he was a popular manager in his four years at the club. But to our benefit, he has brought some stability back to our club, which appeared in pandemonium for the last few months. Of course, all the tabloid speculation and crap that has been said has concealed all the positive work our new coach has done since he arrived. And, of course, we also must give him credit for pushing Alli into a deeper role than he is used to.

After our win over City, in which Alli had a good game,  he was again totally involved against Wolves, benefiting from the cover of Pierre-Emile Hojbjerg and Oliver Skipp.

When the penalty came, I was surprised that Alli took it, not Son. Nevertheless, he showed confidence when scoring. And that penalty was because Alli was brought down by Sa as he ran onto Sergio Reguilon’s through-ball. 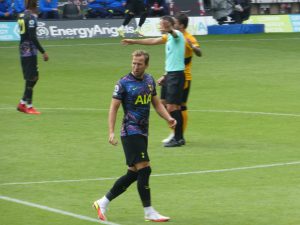 Harry Kane came on in the 72nd minute for his first appearance of the season. When the final whistle went, he strolled over to our section (away supporters area), applauded us, and then gave his manager a big hug. Was the applause for saying “thank you” I am now off? Or, I am going nowhere?  We should get that answer in 8 days time.

At the same time he came over we also applauded him and our team, loud shouts for Kane and the others, with Reguilon and Alli giving their shirts to young Spurs fans.

Met Mel, got a burger and then made our way to the car. On the two hour journey home, we listened to the Arsenal/ Chelsea game. I finally got home at 7.15 pm. Totally knacked, but a joyful day.

We did enough to get our free points, and we are 4th in the league, above United (who drew) and City (who won) and Arsenal, who suffered their 2nd defeat in a row. The Gooners are currently second from the bottom. Always lovely to see them in a good and healthy position. Arsenal’s next game is against City, while Chelsea and Liverpool clash. United will face Wolves on the same day we face Watford. It looks like an exciting August Bank holiday weekend. I have no doubt that the league table will change quite significantly over that period. Hopefully to our benefit.

Our next game will be against Pacos on Thursday, 26th August at 7.45pm, followed by another home game in the league, against Watford at 2pm on 29th August.

Watch out for my “match preview of the Pacos game”.