Well, we are through to the  Europa Conference proper, and there wasn’t really any doubt about it. I predicted we would win and win by 4 goals, and even though we didn’t quite make that scoreline, we threw everything at it, including the kitchen sink. We had 18 shots to their 6; nine were target shots to their 3. Granted, with no significant opposition (that was why we sent out our youngsters in the first leg), this game was a foregone conclusion. What was interesting was how the players would perform, especially the new ones and of course, Kane got arousing applause and scored two for his troubles. Yes, he is back and entirely tuned in. Overall a good evenings work.

It all started off a bit hectic for me (and ended up being a tiring day). I got up at 5.20 to go to the gym, shopping then went to bed for a couple of hours and finally I made my way to Hanna’s (she was looking after my dog) and then from there to my resting place (parking the car) and to the Spurs shop were I brought some nicknacks and the Away Spurs shirt. Back to the car and then in the queue to be let in.

Once through the security checkouts, I got my programme and got something to eat and drink. The others started coming in (Terry, Tim, Liz, Janet, Steve, Ian, Beverley, Kevin, Ollie and Colin), and we settled down for chat and predictions with a few laughs thrown in. Then the witching hour descended upon us, and we were at our seats. Sadly there was only a 26,000 crowd, and around me, most seats were empty. In fact, a good chunk of the stadium was bare. But to the match… 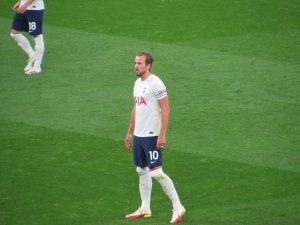 First of all, let us deal with the subject of Kane. Nuno Espirito Santo said that Harry Kane is committed to the club and that it is time for everyone to “move forward”. Yes, having told everybody that he was staying “this summer” (read what you like into that) following conjecture about his future, Kane enthused his teammates as we overturned a first-leg deficit against Pacos de Ferreira to reach the Europa Conference League group stage. He got a fantastic round of applause, singing his name with a few “Yido’s” thrown in.

Nuno’s comments on Kane and everything else,  “All the situations that have happened are part of the past, let’s look and move forward. He doesn’t have to prove anything to anyone. Harry’s with us, so we have to take advantage of it.”

Trailing 1-0 after the first leg in Portugal where our youngers were in charge, Kane opened the scoring after a brilliant pass by our new player and winger Bryan Gil. Kane was starting his first game since 23 May and then added a second before half-time from close range. Giovani lo Celso got our third when his free-kick was deflected in.

We will now discover our group opponents on Friday, with the draw scheduled to start at 12:30 BST.

How things can change within a couple of days. I remember the last time we played at home (against City), fans chanted, ‘Are you watching Harry Kane?’. Now all is forgiven as our fans changed their tune to let Kane know that he was still ‘one of our own’. As somebody once said, “it is a funny old game”. 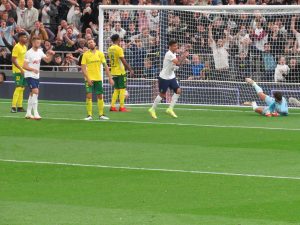 On top of all the Kane funfair, he was also named captain for this match.

In fact, Kane came close to scoring earlier, in the opening 15 seconds, before levelling the aggregate score inside 10 minutes after assistance from  Gil, an impressive player and one to look out for.

With a big match on Sunday (against Watford at home), Kane was replaced after 72 minutes, so he wasn’t too tired for that game. He took his goal tally 223 goals.

Full marks to Nuno as it was a thoroughly professional performance. We have won three of our opening games (the home leg against Pacos was just youngsters getting a tryout, and to be fair, did pretty good). We scored five times and keeping three clean sheets.

As for the Europa Conference League, Nuno said, “This competition will make us grow. This is what we want.”

I hope there are a few pleasant surprises by 31 August (when the transfer window closes), such as a few more new recruits.

I would like to make a few comments on our new players.

Cristian Romero (I give him an 8)

He looked excellent on his feet, solid at the back and confident stepping up and making a difference going forward.

Pierluigi Gollini (I give him an 7)

He dealt with very little, and apart from an untidy moment in conceding a corner aside, he did well.

Some will say he was a bit rough around the edges but an exhilarating player nevertheless, always looking to get into essential places. Good assist for Kane’s first.

Bryan was handed his Spurs debut in the first leg against Pacos de Ferreira, and he showed us what he can bring to the team. He caused problems for Pacos with some excellent runs down the left flank; his influence on the game waned after the break when he moved over to the right flank. Nevertheless, Nuno handed him a different role in the second leg as he started in the middle of a three playing behind Kane. He was involved early on as he looked to get on the ball; he had a crucial role in the opener as he picked out Kane in the box to find the net. He later hit the post and also saw an effort go over with deflected efforts; Bryan also had a shot that just went wide of the post midway through the second half.

But full marks to him as he made an impressive home debut and he looked at home in his new role. Personally, I would start him against Watford. His acquisition was a wise one. He impressed me more than any other player (ok, full credit to Kane, after a very psychological draining few months for him).

In the interval, we all retired for drinks and discussed what we had seen in the first half. Beverley said that the seats near her were empty (right behind the dugout) and invited Colin, Ian, Terry and me to sit with her. It isn’t the first time I’ve sat there, as I sat there at our first friendly at the stadium. Beverley also invited me to sit next to her then.

Once the final whistle went, we stood, applauded and then went in for our snacks and drinks. Then I had to leave at 10.15 to make my journey to Hanna’s to pick my dog up and then home; I got home at 1am and totally knackered. Got up at 9am. 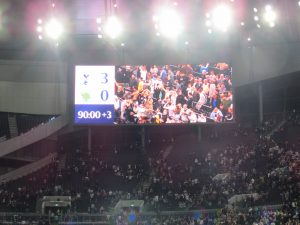 Watford at home (Sunday 29th); 2 pm kick-off. This means that I will have to leave at 8 am or before. For us, doors open at 11 am. Season ticket holders go in an hour later.

That is it, folks! A tiring day, excellent result and we are through to the next round. Stay safe, Glenn