Match report: Spurs 1 Watford 0 (Top of the league, while the Gooners are dead-bottom).

Sorry this is a bit late, but it has been a long weekend bank holiday. I was at the game on Sunday, and on Saturday, Arsenal were thrashed by City (always lovely to see the arse being crushed and at the bottom). Reminisced in Blunsdon, Swindon, where I grew up, but that is another story.

So far, all my predictions have come true (we won), sadly not by the score I predicted… where I was over-enthusiastic. But a win is a win, no matter what the scoreline is.

Nuno achieved what only one previous Spurs manager achieved: to win his first three wins as manager (City, Wolves and Watford). The first manager to do this was Arthur Rowe, and he went on to win the Division 2 league title; the following year, he won the League Trophy of Division one. In that famous “push & Run” team he managed were Bill Nicholson and Alf Ramsey, both went on to win the league title as managers, Nicholson with Spurs, while Ramsey did it with Ipswich and then went on to manage England and won the World Cup to boot.

But before all that, I left at 8 am on Sunday morning to get to Spurs, parked up and waited for over an hour to get in. While waiting, popped into the Spurs shop – to kill time – and then into the stadium. Met the others, enjoyed ourselves for three hours before kick-off and then to our seats.

You couldn’t have written it better, and if you tried, people would have thought it was just fiction. This was a game where we ended at the top of the league table, while Arsenal supported everybody else at the bottom. Son marked his 200th Premier League appearance with the winning goal, thus maintaining our 100% start to the season. Beating Watford 1-0 means that we are heading into September’s international break top of the Christmas tree (well, maybe not quite a Christmas tree, but at the top of the tree, nevertheless, which will do nicely).

And as I said above, It also sees our new head coach Nuno Espirito Santo become just the second Spurs boss to win his first three league games in charge of the club, the last man to accomplish this feat was Arthur Rowe, in 1949 (such events are always worth repeating). I’ve already told you what he went on to achieve (if only Nuno can be that successful, as well?). 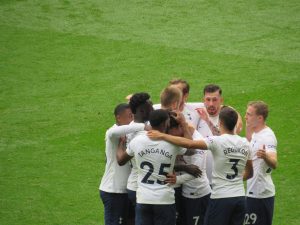 But it wasn’t an easy three points, as Watford made us work hard for our conquest. Son’s inswinging free-kick deceived goalkeeper Daniel Bachmann and found the bottom-right corner.

As for “one of our own” Kane, well, he was quiet while Steven Bergwijn, Eric Dier and Dele Alli all had chances. However, the Watford side did offer plenty of attacking threats of their own.  Their Juraj Kucka twice failed to take advantage of good opportunities to score, and Emmanuel Dennis also gave us some uncomfortable moments.

Nuno praised the spirit of the team but admits there are ‘things to improve.’

There was a feeling of optimism from the fans as the team emerged before kick-off, with Kane, in particular, receiving an inspiring welcome. And that positivity was still far-reaching around the stadium at full-time with a 300th Premier League home win in the basket.

That victory over Watford and our performance set us up brilliantly for a challenging run of fixtures when the Premier League resumes. It looks like I’ll be going to Crystal Palace, Chelsea and Arsenal in our next three games, all London clubs.

Since Nuno took over, we’ve become more solid in defence and even managed to keep Kane in the process… and the transfer window isn’t over yet, well, at least until tonight (Tuesday), so many more surprises might be in store for us! 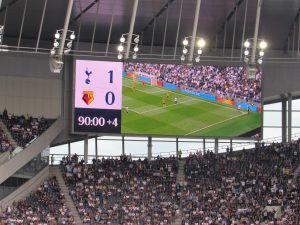 On top of all that, we are yet to concede a league goal this term, and the way in which Dier and Davinson Sanchez performed underlined a new attitude to defending.

The Player of the match was Sonny (nice one, son!).

So, we are at the top of the league table, and Arsenal – always worth repeating –  are at the bottom, and may it long continue.

What is next for us?