Match Report: Spurs 0 Chelsea 3 (on the day that a legend dies)

When I heard that Jimmy Greaves died, I thought it was ironic that we play Chelsea at the Tottenham Stadium on that day. The greatest footballer in history started off his footballing life by playing for Chelsea, but made his mark on the world playing for us. I shall write a separate tribute to our legend, as I don’t want to entangle that tribute with our defeat. 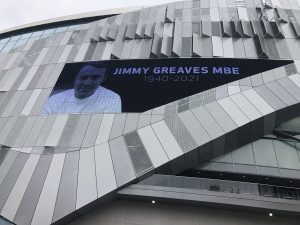 The day started off for me hearing the news of Greavsie’s death (actually, the day started off in the gym); when I got to North London, I noticed that the stadium had a tribute to Jimmy Greaves on its outside screen, which I thought was a nice touch. Once in the stadium, I got my programme, talked to staff and then got something to eat and drink. Once the other’s arrived, we spoke about Greavsie (obviously) and the game.

I had seen him play live on many occasions and had met him in person. A couple of seasons ago, I also met his son, Danny (actually, I had seen his son when he was very young). But more of that in another article… now to another sad decline (I say that tongue in cheek, then again maybe not) of our start of the season.

To cut a long story short, Chelsea stretched their unbeaten Premier League run to five games as they deservedly beat us. Granted, the first half was a different story; however, once they woke up, the goals were predictable… even the last goal I could see coming.

I am usually an optimist, sadly, that can get in the way of reality… it was Voltaire who said, “Optimism is the madness of insisting that all is well when we are miserable.” That sounds like me. And, yes, I predicted we would win.

After managing no shots on target in the first half, we thought things would be different in the second half; however, Chelsea looked like another team after the break and scored three second-half goals in our fortress (that was an attempt at a joke). Yes, Chelsea opened the scoring four minutes after the restart (that tells you a lot; they got a kick up the arse, we probably got a pat on the head, a cowpat) when Thiago Silva headed past Hugo Lloris from Marcos Alonso’s corner. Then half-time substitute N’Golo Kante added a second with his first goal in 49 league appearances, though his long-range effort took a massive deflection from Eric Dier. Then Antonio Rudiger found the bottom corner in injury time to complete their win, and it was all over bar the shouting. But long before that, our supporters started leaving… and who can blame them. Once the first goal went in, we could see it was over.

As I said, we started the game well. The team lineup gave one confidence; we were the better side in the first half, but Nuno Espirito Santo’s side managed just two shots on target throughout the second half and struggled to find a response after Chelsea went ahead.

Chelsea are one of only three teams who haven’t lost a game this season, and the others are Liverpool and Manchester United. I remember us saying the same thing after we beat City, Wolves and Watford after our first three games. Then defeats to Palace (which we should have won if we had a more attacking team out) and now Chelsea.

That victory lifts the Russkies to joint top of the table, alongside Liverpool.

It was a game of two halves with Chelsea smiling like Cheshire cats at the final whistle.

The Chelsea manager Thomas Tuchel said that he was “absolutely not happy” with his side’s first-half performance, and whatever he said clearly did the trick.

As for Nuno’s comments, after the game, many things went badly wrong in the second half – you THINK!

Mount’s withdrawal at half-time changed their system, and the introduction of Kante was the mechanism for their dominant second-half display.

What was so maddening was that no team has managed more shots on target in a Premier League game this season than Chelsea did against us, with all 10 coming in the second half. Nonetheless, praise must go to our keeper as he undoubtedly kept it down to a decent scoreline. Still, he was eventually crushed for a third time when they brought on substitute Werner, as he picked out Rudiger in the box, allowing him to shot the ball into the bottom left-hand corner.

After winning our opening three League games, it is now back-to-back 3-0 defeats for us ( in two games, we let in six goals) and have scored just one goal from open play this season.

Yes, we did start our game against Chelsea full of energy and showed our attacking intent from the first whistle. The team was lifted by the return of Son, who returned after missing two games with a calf strain. His was at the heart of our early chances, and it was he who managed the only shot on target in the first half. Chelsea were resolute and brutal to break down. After the respite, it was one-way traffic as they grew into the game, and we started to look lethargic after going behind.

As for Kane, he was kept silent and constrained to just two chances and often looked lost at the top of the pitch. It is the first time since 2015-16 that he has failed to score in his first four Premier League appearances of a season. I bet he wished he had forced his way out of the club and had gone to a winning side! Probably another season without any trophies, and as for a top-four spot or even a Europa League placing, looks like a distant dream…  If we should get knocked out of the League Cup by Wolves and then a defeat at Arsenal, who were at the bottom of the league not so long ago, then god help us! God help Nuno, who will be up the creek without a paddle.

So, that is my assessment; where do we go from here? The optimist in me will say that we’ve only lost two games and did beat City, Wolves and Watford, but my heart says we will struggle. In a previous article, I did say that with all our injuries – against Palace – Nuno’s mettle would be tested; why didn’t he put out an attacking team? God knows! I believe we could have won it. In the Chelsea game, we put out a different team and going by the first half, we could have won it. But we didn’t, and that is what Nuno has to sort out. God knows what Jimmy Greaves will be thinking, looking down upon the fiasco unfolding in front of him?