Match report/ disaster (?) the game that never was, and yes, I travelled there!

“Burnley’s Premier League match against Tottenham Hotspur at Turf Moor was postponed 50 minutes before kick-off because of heavy snow.

The game was due to start at 14:00 GMT, but despite attempts to make the pitch playable, it was called off at 13:10.” Quoted from the BBC webpage.

Well, that was fun. Left at 7am (picked up by Mel) and got to the ground at 10.30ish, parked up at the cricket ground and paid £7.00 for the privilege of wasting our day, while lining the car park attendance pockets for a no show game.

It was then that it started snowing… nothing to shout home about, so we wandered around looking for an eatery (please, this was Burnley… for Christ sake!). Found one pub/ eatery, but it didn’t open until 12 (somebody missed a trick), so then we found a drinking hole, went in and ordered, but was quickly ejected (in a nice way) because we were Spurs supporters.  I said to the girl, “how do you know we are Spurs? Going by our accents is prejudice….” “True,” she replied, “but you’ve got a cock on your cloves”. Well observed, so a cock came between us and a fair and honest drink. Lucky we weren’t members of the Arse-nal, otherwise, we would have been caught out because we turned the other cheek. But the young lady did point us in another direction (back to the cricket ground – where we parked – as there was a place in the cricket club rooms for Spurs supporters). So back we went to where we parked our car and into the club and managed to get a plate of chips, peas and pie with a pint and talked to somebody who happened to come from near where I live (he came from Didcot).

About this time, Mel joked that the game had been “called off,” oh, we laughed! Such panter before the game! We were beside ourselves!

After pleasantries, we made our way to the ground – got a programme – and chatted to the Spurs security as the snow came down. Twelve-thirty came, and we made our way to the security/ turnstiles, where one of the Burnley stewards joked “any bombs or weapons to declare?” I said “no,” and was allowed in, without her even checking my bag, where all my arsenal was stored (no, not Woolwich)…

Got a pie and a pint (yes, another) observed the snow on the pitch, then Rick and Beverley turned up, chatted and then it came over the tannoy that the game had been called off. “What the fuck!” went the crowd in unison. Most, if not all, had come from miles away, even further than we had travelled. Don’t they have weather forecasters in Burnley who can forecast such weather conditions? And to boot, they didn’t even bother to put their undersoil heating on… curious curiouser, but helpful to Burnley as they had players that had injury problems.

Now… my beef is this… going back to pre-2000 or even into the 80s (70s, 60s,50s or beyond) when it really did snow; we (as in the players) didn’t cry off when the pitch was covered in the white stuff. They got on with it. That was the days when tackles meant tackles and men were men, not shy-cry-babies and earning millions of pounds a year and travelling in luxury heated accommodation coaches.

I remember going to a match (and not just one, but this is typical) where the snow was well past our shoes (no seats for us supporters, unless you had the money… and most didn’t in those days), we were freezing our bollocks off, as were the players. Those were the days when one had a stiff upper… even the cockerel on our badge had one. Even when the pitch was a mud bath, the players still played, and we even got splashed as the players skidded near/ passed us (if we were near the front).  Now we are producing millionaire arseholes that can’t even perform for Conte,  but the powers that are, call the game off in case it offends the player’s sensitivity. As for the supporters who didn’t travel in luxury players coaches, fuck ’em!. That is our problem and if we don’t like it… “don’t go!” Simples!

Of course, those supporters who travelled won’t get any compensation other than another ticket to see the rescheduled match. Forget the supporters who wasted their precious day off, or it cost them a fortune in petrol, hotels, parking, food etc. Oh, no… Daniel Levy and co are ok as their arse-wipers will mollycoddle them into ecstasy until their eyeballs roll back into their sockets where only Alice in Wonderland world exists.

“Why, sometimes I’ve believed as many as six impossible things before breakfast.” Said Levy to those that sit around him in transfixion.

“It’s no use going back to yesterday, because I was a different person then.” Said Levy in his Wonderland world, as he counts his money!

“It takes all the running you can do, to keep in the same place. If you want to get somewhere else, you must run at least twice as fast as that!”

All these quotes could have easily come out of Levy’s mouth… “Curiouser and curiouser!”

Anyway, enough of this self-tortured frivolity. Deep down, I am sure our Daniel really cares about us… after all, he wears his cockerel laced underpants outside his trousers when skulking around the dark and quiet corridors of the Tottenham stadium late at night… well, that is the rumour (a true and faithful Spurs supporters bouncing around in his own closet!)

[Addendum: if any Levy supporters reading this are offended, don’t be; he is a millionaire who can cover any sore tips with £50 notes that reflect hurt, sarcasm or even a fan using slapstick absurdity in a tongue-in-cheek way to cover one’s anger/ hurt or jolliness] It is life, Jim, but not necessarily as we know it.

But… and putting Alice’s wonderland to one side, back to my story. Where was I? oh, yes… compensation! One fan – with his girlfriend – travelled all the way from America to see Conte’s wonder-landers take on the mighty Burnley after our historical classic with Mura (and we all know what happened there!).

So, the match was called off, and the pies were all given out to us poor downtrodden fans (that is given out free). One Tottenham fan ran up and down the Burnley away corridor end shouting, “get your free pies.” He was beside himself, and he was grabbing the freebees as if he had just won the lottery.  At least somebody was going home happy… no doubt to tell his girlfriend/ wife or male lover/ partner that he had a fantastic pie day out and all was worth it (“look what I got,” he probably shouted). As he grabbed his testicles while beaming from ear to ear… or was that from here to here?

We then made our way to Mel’s car, travelled through snowstorms, rain, stopped off for coffees etc. and finally got home at 7.30ish. Mel had another hour to go before he got home.

I noticed that Manchester City still played in the snowstorm – they were only down the road from Burnley. Carry on regardless unless you were a manager with injury problems and wanted the game called off to save you points.

So, that is it… my little ditty – the life and tribulations of a poor downtrodden Spurs fan.

Our next game is at our Tottenham Stadium against Brentford (this Thursday)… and, no worries about the game being called off as we will switch on our undersoil heating. 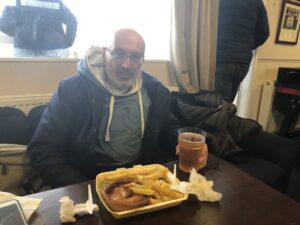 4 thoughts on “Match report/ disaster (?) the game that never was, and yes, I travelled there!”