UEFA have confirmed to Sky Sports that this evening’s Europa Conference League match between Rennes and us will not go ahead. Yes, it has been cancelled.

The club released a statement yesterday evening in which they claimed that the fixture will not take place due to the number of positive Covid-19 tests within the Tottenham camp.

We have experienced a rise in Covide cases and have had to close the first team area (this is at our Hotspur Way training centre).

Rennes; the team, and the supporters arrived in North London yesterday evening. And then promptly criticised the club in which they made it clear that Tottenham’s decision was not confirmed by UEFA.

However, an earlier statement by UEFA stated that:  “The match is due to take place as scheduled. For further information regarding Tottenham’s COVID situation, please contact the club.”

Then Sky claimed, along with Tottenham, that UEFA told them that the match would not be played this evening (Thursday). 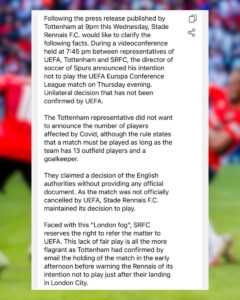 It has also been stated that we have not forfeited the fixture and the game will be rearranged for a future date, and there could be some flexibility for the tie to be played next year.

On top of all that, there is doubt over the Brighton game this Sunday. Logically if players have to isolate for 10 days, then there can be no way they can play this Sunday. However, it hasn’t been officially stated one way or the other. Like the Burnley game, we will probably march to Brighton only to be told that the match is cancelled. As told to Rennes and their supporters. Why not create chaos rather than come to a sensible conclusion before everybody travelled… after all, this wasn’t suddenly thrust up us. We’ve known about the virus hitting the players for a while.

I was all ready to go to this match and at the last minute, it was cancelled. When such decisions are made there are no considerations for the fans that travelled miles… Rennes fans must be particularly pissed off; as we were when we travelled to Burnley… granted, not as far… but still annoying nevertheless. No, we have to wait and see about Brighton on Sunday… from where I am standing it will be cancelled as well; for the reason’s I appointed out above. But then again fans are never put first… the objective (for the club) is our money… not our well being. We are disposable; if we don’t like it then others will be happy to take our place.