I hope you all had a good Christmas? Of course, the icing on the cake was our victory over Palace. Full credit to Conte for turning a bunch of individuals who weren’t working together into a clockwork near (I said, “near”) precision structure (however, there is still a lot of work to do).

What was interesting about yesterday’s match was the comparisons between then and our encounter with Palace at their ground at the beginning of the season.  The same scoreline, same referee and the same two players involved in the sending off.

What a headache our match was between Palace and us. The night before, it was reported on social media that the game would be called off.  Throughout the night, I was checking. Then in the morning, I checked again… papers were saying it would be called off, but I took the chance and left at 8am. When I arrived, there was still uncertainty. It wasn’t until I got into the stadium that we knew that the game was on. My friend Terry asked me to contact him when I was in so he could leave his house (he only lived half an hour away).

It seems Palace asked the Premier League to postpone the game because of a Covid-19 outbreak that included a positive test for Patrick Vieira. Because of his absence, their manager Osian Roberts, his assistant, took charge of the team. And I must say he did an excellent job… thank you! 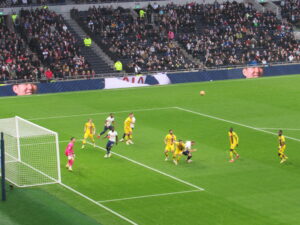 … once in, programme, up up and away, then to the bar where I ordered a bottle of Malbec and six glasses, got some food and waited for the others.

There was a festive spirit before the match and a joyous feel coming from the crowd. Everything was in a good and positive mood. I predicted a 3-1 or 4-1 win; in the end, we won 3-0. I wasn’t moaning!

After the game, Antonio Conte said it would be “difficult” to alternate Harry Kane after the striker scored his second goal in as many League games. On the subject o Kane, he opened the scoring before Lucas Moura doubled our lead. Son got our third and last goal to give us a well-earned victory. Before that, he only scored once in the league before 19 December. Goals against Liverpool and Palace in back-to-back league games has captivated Conte into shouting out his praise.

Conte said, on Kane: “I always say we are talking about a top-class striker and a player that for us is very important. Today I had the possibility to give him a bit of rest and for him to play only 60 minutes was important. Kane is a player it is very difficult to decide to put in a rotation.”

Conte substituted Kane just after an hour because of fixtures against Southampton and Watford coming up in the next six days.

In our six league games under Conte, we are unbeaten and are six points behind fourth-placed Gooners, with three games in hand.

As I said earlier, Wilfried Zaha was sent off for a violent confrontation. He felt aggrieved about this sending off for two bookable offences in the first half. Tough, shit! Palace are now 12th in the table. 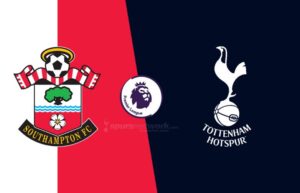 After a hapless Nuno took charge of our 3-0 defeat against Palace at the beginning of the season, it was Conte’s turn to show how it should be done as we dominated Palace.

We won our Premier League games against Southampton last season by an average score of 7-3 – netting five of those goals at St Mary’s. Hopefully, now, Conte’s side can translate that positive home form into results on the road.

Southampton came down with a trio of virus cases before their win over the Bubble blowers; Jack Stephens, Nathan Tella, and Lyanco returned positive tests.

Fraser Forster was fit enough to return in goal, leaving fellow Alex McCarthy (thigh) as the Saints’ only injury absentee for Tuesday’s game.

Cristian Romero and Ryan Sessegnon are expected to remain in the treatment room until after the New Year, but the Palace win has no fresh concerns.

Bryan Gil has recovered from a bout of coronavirus and was featured off the bench on Boxing Day.

Harry Kane should be fine to go again after being taken off on the 64-minute mark, but Dele Alli and Tanguy Ndombele could benefit from two games in two days.

Conte has done a brilliant job since taking over from hapless… and with the same misfit players that were at the disposal of Mourinho and Nuno. I can see Conte’s influence getting more robust with the players getting stronger and becoming a proper playing-working together team.

Since their return to the Premier League in 2012, Southampton has lost 13 top-flight matches against Tottenham.

We are undefeated on seven of our past nine Premier League visits to St Mary’s, including a 5-2 win last season.

Their win over Spammers was their first in seven matches.

Southampton hasn’t lost just once at home in the league this season and are unbeaten in their last five at St Mary’s. It is their longest undefeated run at home in the top flight since going nine games between March and October 2016.

We have failed to score in our last two away league games and managed just 15 shots combined in those games. We haven’t gone three without a goal away from home since March 2014 under Tim Sherwood.

This is our first Premier League away game in 51 days since a goalless draw at Everton on 7 November. It’s the longest gap any side has had between away games in a single campaign in the competition (excluding lockdown).

Son has been directly involved in a career-best 12 goals in 11 Premier League games against Southampton, scoring nine and assisting three.

No ticket came for this match

Unfortunately, my ticket didn’t come (nor did Mel’s) for this game. So I called Tottenham, and they are arranging for us to pick up the tickets anytime three hours before kickoff at the Southampton ground.

Come On You Spurs!