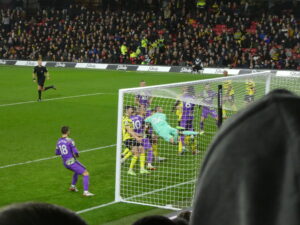 Yes, it seems that Watford’s objective was to discourage and have an eleven-man defence… occasionally attacking on the break, but overall, a poor performance by a team that was fighting relegation. As for us, we did what was necessary… we won (just).

Before this game, Watford lost five in a row, our game made it six.

We had 74% of the possession and twenty 1 shots on target.

Before the game, Mel and his son picked me up at 12, and we made our way to Watford. From there, we found the pub where everybody congregated… our friends and Spurs supporters, Oddfellows… appropriate! About 1.45 to the stadium and in (oh, programme first)… then in.

Davinson Sanchez scored a 96th-minute winner as we continued our push for a Premier League top-four place with a last-gasp victory over struggling Watford at Vicarage Road.

Sanchez headed in from Son’s cross as our manager continued his unbeaten run.

Watford’s intentions were to close up shop initially and only try to get a goal on the break.

Their goalkeeper Daniel Bachmann denied at close range in the second half, after Lloris had produced a good save from Josh King at the other end.

Joao Pedro had a late penalty plea dismissed after Spurs Hugo Lloris raced out of his goal to deny him.

Up and until then, the most exciting thing was when the game was paused in the closing stages because of a medical emergency in the crowd, which created eight minutes of stoppage time.

Conte became our first manager to avoid defeat in his first seven league matches in charge.

As for Kane, well, he was unable to extend his scoring run to a fourth league match, shooting wide following a first-half defensive error by Imran Louza. At the same time, their goalkeeper was equal to Harry’s attempt shortly after the restart.

That is that, now we move on to the cup match and our meeting with Chelsea this Wednesday 5th January). 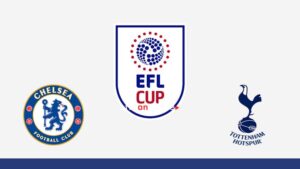 Before this game, Colin, from our WhatsApp group, booked a table in Chelsea for six of us. This means we are leaving home, or I’ll be leaving home, as Mel lives an hour away, at 2pm.

The talk of the day will probably be – by the press – the return of Antonio Conte, as he makes his return to Stamford Bridge for the first leg EFL Cup semi-final with Chelsea night.

The Russian bears defeated Brentford (2-0) to reach the final four, while we beat the Spammers 2-1 in the quarter-finals.

Chelsea’s performances have been far from good in the 2021-22 EFL Cup, needing penalties to overcome Southampton and Aston Villa at home after 1-1 draws.

The EFL Cup represents our best chance to finally end our 13-year trophy drought. Our last piece of silverware coincidentally came in the 2008 competition after beating Chelsea in the final.

We had to rely on a last-gasp Davinson Sanchez header to get over the line against Watford on New Year’s Day. Still, we remain unbeaten domestically since Conte took charge, with the Italian the first manager in Tottenham’s history not to lose any of his first eight league games in charge.

Our victory at the Hornet’s nest represents our only away win so far in the Conte era.

We did manage to beat the Chelski in the 2020-21 EFL Cup fourth round, but that win represents our only win from our last eight against the Blues, who eased to a 3-0 win at the Tottenham Hotspur Stadium in September’s Premier League clash.

Lukaku was dropped from the squad to face Liverpool after his revealing interview and may not be considered for selection here either, while Edouard Mendy is with Senegal for the Africa Cup of Nations.

Ruben Loftus-Cheek has COVID-19, but Reece James, Ben Chilwell, Andreas Christensen and Timo Werner are expected to miss out. Their Kepa Arrizabalaga will return in goal with Mendy unavailable, while Jorginho, Callum Hudson-Odoi and potentially even Saul Niguez can feel hopeful.

Steven Bergwijn, Cristian Romero and Ryan Sessegnon all remain out of contention.

There may be some rotation, with Japhet Tanganga and Harry Winks both prime candidates to start. Bryan Gil and Dele Alli could provide some fresh legs, while a lack of alternative options will see Harry Kane play in his striker role.

As for my prediction: 2-1, however, I can also see a draw at their ground.

All the best, Glenn COYS!