Book Review: Tottenham from the Lane. The Story of Spurs in N17 by K Lucas

As a lifelong Spurs fan (my dad took me in the late 50s, and I am still going strong; just), I’ve read and got every book on Spurs’ history. So the history of our great club is embedded in my brain. The question is, do we need another book on our past? I thought not, until I read Kat Lucas’ brilliant description of our great club, which incorporates the social changes in N17 on your ride through the club’s and Tottenham’s past … If this was just a book about the club’s history, it would stand up in its own right; however, this book is much more. As you ride through each decade, you see and feel how the area changes; from 1882 to 2021.

Kat Lucas takes you on a ride from the club’s inauguration when it was called The Hotspur Football Club. Formed in1882 by a group of schoolboys from Saint John’s Middle-Class School and Tottenham Grammar School to the building of our magnificent arena.

With his two friends, Sam Casey and John Anderson, Robert Buckle conceived the idea of a football club so they could continue their love of sport during the winter months. Club lore states that the boys gathered under a lamppost along Tottenham High Road about 100 yards from the now-demolished White Hart Lane ground and agreed to form a football club. Their meeting date is unknown, so the Hotspur Football Club is taken to have been created around 5 September 1882, when the eleven boys had to start paying their first annual subscriptions of sixpence. Changing grounds on the way until we reached White Hart Lane in 1899. The land was eventually bought by the club in 1921 and became its official address (748 Tottenham High Road) in 1935. 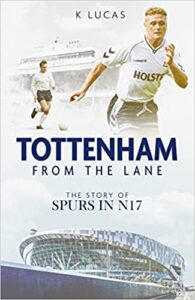 Kat Lucas takes you through FA Cup success as a non League club to the Southern League period and eventually League status. Along the way, we come across a world war, “illegal inducements (Payne’s boots), ” a Parrot,” Arsenal moving to North London, and Again Arsenal pinching our place unfairly in Division One while we were relegated. You then understand the fierce rivalry between the two clubs. Nevertheless, we showed our kindness towards our neighbours by allowing Arsenal to share our White Hart Lane ground during World War II. And how do they repay our generosity? By staying put in North London and not going back to Woolwich, where they actually belong. Arsenal was founded as Dial Square Football Club in 1886 (four years after us) by a group of workers employed by the Dial Square workshop at the Royal Arsenal, an armaments factory in Woolwich. But enough about treachery.

From the second world war, we travel through the 50s (Rowe’s push & run) to the  60s (Bill Nicholson, Greaves etc., and the double era) to the 70s, where we saw hooliganism, relegation, cups and two Argentinians coming on board, and that is just for starters.

From the 70s, we move on to the glorious stewardship of Keith Burkinshaw in the 80s, where the Trophy nights returned, takeovers, Shelf’s falling under protests and Boxes erected to make money, along with new stands and much more.

We leave the 80s under K Lucas’ superb prose (where “there used to be a football club over there”) to sweet and sour (Sugar & Venables), fines, fallouts, an FA Cup win and more.

Then we enter this century with another takeover by a billionaire, with a bit of Levy magic thrown in, one single trophy under ENIC’S reign (so-far), then a glorious phoenix rising from the ashes of White Hart Lane to become a magnificent world-beating stadium… Oh, and a few failed cup finals thrown into the mix, including the dripping icing on a  Champions League cake that was eventually daubed in red paint, followed by the dismissal of Tottenham’s Argentinian revival architect.

Through this book’s club history and social changes at N17, we see the politics behind the scenes in full Dulux colour (with Ms Lucas setting the record straight over certain misunderstandings). What a journey… of course, in my humble piece, I only touch upon parts of Kat’s excellent labour of love… as it is not for me to take over and give you the full-blown version; for that, you need to rush out and purchase her magnificent work of art. Trust me, you will enjoy the rid that K Lucas takes you on, and in the end, you will be a lot wiser about our proud and brilliant history (socially, football-wise and politically). I know I learnt a lot (and that is saying something!)

Reading her magnificent book, I can tell you this won’t be the last… but the beginning of a beautiful relationship between her and her newly required readership… adding as she goes along.

So who is K Lucas? She is is a sports journalist for the i newspaper and Spurs season-ticket holder. From the old Shelf Side to the new Park Lane via the press box, she has reported on Tottenham Hotspur for several years and is a lifelong supporter. A visiting fellow with the Open University, much of her work has focused on how sport and history intertwine.

Trust me, this is a magnificent book, Glenn

This book can be found in any good books shop or online (such as Amazon).