My weekend started on Friday at Ipswich Town FC and ended with a Chelski defeat at Stamford Bridge. But for those not interested in Ipswich, I’ll go straight to Sunday and deal with my trip to Ipswich later.

The day started with me being picked up at 10.30 by Mel. We travelled to Hounslow East (or was it west?), parked in the car park, then made our way to Fulham Broadway. From there, we went to the restaurant in Fulham called the Goat and met up with Terry, Colin, Ian, Janet, Steve and Kevin and had a three-course meal (with plenty of wine). We arrived at the restaurant at 1 pm. About 3.30ish, we made our way to the Russian Den of Hammer house of horrors and into a poorly run security/ fan cauldron.

I thought Chelski’s COVID and security checks were poor; virtually non-existence. You wondered what the point was… it was basically, play the game and just hope that a bomber wouldn’t get through. But to be fair on Chelski, most clubs are the same in my experience (an observation from travelling away). Most probably believe what they are carrying out is pointless. I must add that our security is more with it and helpful. It is like anything; security at away matches is slack until an incident happens … Then full-on… relax again… then after a specific time… bang!

Once in and safely settled, it was time for the players to come out. Boos, abuse and hisses were the order of the day (as in all high profile games).

Two second-half goals, including an excellent strike from Hakim Ziyech, helped the Russians beat us for the third time in three weeks.

After a goalless first half, Ziyech scored within two minutes of the restart. The Russian bears doubled their lead eight minutes later when defender Thiago Silva headed in from Mason Mount’s free-kick.

We thought we had taken the lead in the first half as Kane slotted past Kepa Arrizabalaga. But the goal was disallowed because Kane was adjudged to have pushed Silva to the ground. This victory follows the Russians winning their Carabao Cup semi-final against us in both legs. They won by 3-0 on aggregate to set up a Wembley final against Liverpool. So, this is another season that saw our hopes dashed.

It is our first defeat in the league since Antonio Conte joined us. However, we had previously been beaten in the Europa Conference League and knocked out of the League cup under him. But if there is anybody to blame for our poor squad, we must look upwards, not to a manager who has inherited shit and is doing the best he can with what he got.

Conte opted for a back four, the first time he has done so in a league game while managing us; his intentions, no doubt, was to keep it tight and aim for a counter-attack. Nevertheless, Chelski nearly broke through in the opening minute when Romelu Lukaku shot over on the bar for all his changes. Before that, they again failed to convert further chances through Hudson-Odoi, Silva and Ziyech.

Harry Kane thought he had given us the lead in the 39th minute but saw the goal ruled out for a mild push on Thiago Silva. And it was mild… a weak wind would probably have done more damage to the vulnerable legless player.

Watching the game, you could see Tommy Tickel Tuchel was furious that Japhet Tanganga, who had already been booked, was not shown a second yellow card when he had a hold of Hudson-Odoi’s shirt late in the first half; however, it was basically nothing, Tickle was just hoping for something to come out of nothing. For Christ sake, he is German. What else do you expect?

No matter, we still lost, which shows you that Conte needs to buy in the transfer window this season; otherwise, we could be more profoundly in the shit. 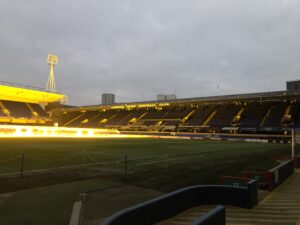 To Ipswich now… as promised.

Janette’s wish was to always go to Portman Road and see her beloved Ipswich play at home. She had seen them win the FA Cup final in the late 70s by beating the Gooners. She had also seen them in the Charity Sheild and at away games, but never at Portman Road. Luckily for me, I have two good friends that go to Tottenham (Tim & Liz), and Liz is one of the Directors at Ipswich Town (Tim is also well connected). So, Liz and Tim got me tickets for the hospitality game against Accrington Stanley.

So, Friday morning, we were off on a three-hour drive and arrived at the Novotel hotel at about 3.50 pm. Tim collected us at 4.30ish, and we were given a brilliant tour around the Ipswich grounds; inside (boardroom/ memorabilia area). He and Liz gave us a virtuoso history talk on the grand old club/ stadium. Janette was fascinated (as I was) with the tour and the thoughtful guidance from Tim and Liz. After the tour, we said our goodbyes, then made our way to a brilliant pub/ restaurant near our hotel and got a meal and a couple of bottles of wine. Back at the hotel, more drinks… or should I say “shorts”? Ready for what the following would bring us.

We made our way to the Ipswich Fan zone, where Liz and Tim were working the following day. We were shown around the stalls, particularly the mobile history museum of Ipswich FC. A brilliant put together by true loving supporters (helped by Tim & Liz). We don’t have anything like that at Spurs; it is more run as a multimillion-pound industry that sees the fans as an irritant (necessary, but nevertheless, an irritant) than a connection to the club. On the other hand, Clubs like Ipswich integrate the fans into the club as if it is a family affair, not a money-making enterprise for the rich and connected.


We were shown around the mobile/ van museum and had a thoroughly brilliant time there. All thanks to Tim and Liz. We look forward to going back again… I know Janette wants to go back soon. Also, thanks to the two ladies running it, very knowledgeable and likeable young women, it was the icing on the cake. We couldn’t stay too long as we were booked into the Bobby Robson suite for a meal beforehand. So, off we went and were treated in a manner we weren’t used to at a football match. Premium at Tottenham is more self-service than hospitality; unless you go higher up the financial ladder, where you get somebody wiping your arse for you).

A great atmosphere from everybody at the club (thank you). We had a three-course meal; Janette had her photo taken with the legendary Ipswich player John Wark. The hospitality also included a quiz and a few guest celebrities thrown in. Oh, and Tim came down and said hello. Then it was time for the game against Accrington Stanley to start, and what a game it was. After going a goal down, Ipswich ended up winning 2-1, to the delight of Janette. I must say, some of the tackles I witnessed wouldn’t be allowed in the Premier League; there would be bookings flying around everywhere. The positive side is that they don’t have VAR.

After the game, we went back in for a drink, and to the surprise and delight of Janette, she was presented with a bouquet from the club, what a wonderful day. So a special thanks to Liz, Tim and all from Ipswich FC. We have a multibillion-pound stadium and can’t even get our Tottenham museum up and running yet. But to be fair, Ipswich Town FC know what they are doing with everything to do with what is surrounding and inside the club (maybe, apart from the football… but then again… we do have Daniel Levy running things, overviewing the team… say no more, in the best Monty Python style!).