Daniel Levy: one flew over the cuckoo’s nest

Daniel Levy’s take over of our club reminds me of the film/ book “One flew over the cuckoo’s nest”. For those unfamiliar with the film/ book, let me summarise it for you: Ken Kesey’s novel depicts a mental asylum in which repeated attempts to diagnose the patients as insane are conceived as part of a larger scheme to produce pliant, docile subjects across the United States. Maybe not exactly, but you get my meaning.

Since Spurs were taken over, there has been a bigger scheme to reduce the teams positioning in the multiplex stadium to an act that is part of a larger money-making machine. The Lunatics certainly have taken over the stadium and made it into their money-making image. It no longer has the feel of White Hart Lane but a cash cow… and to prove my point, the Spurs cockerel has been removed as the Stadium emblem (in some parts) and has been replaced with a new Tottenham stadium badge; which is on staff’s uniforms and scattered around the club. Why? To downplay the team in the Tottenham stadium and give equal or higher preference to other acts.

Ever since Daniel Levy and Joe Lewis took over the club, they’ve had a grand idea to demolish our heritage and replace it with a money-making machine… now achieved. While all this has been happening, the team/ squad has been starved of funds, and managers have come and gone, with nothing to show for their endeavours (oh, sorry… one lowly League cup, and that was in 2008). Since then, fuck all. All the while enriching themselves. That is Daniel Levy and Joe Lewis’ legacy where the squad/ team is concerned. 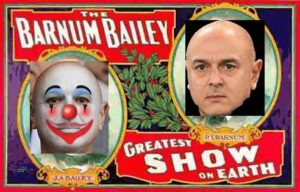 Joseph C. Lewis, according to the Sunday Times Rich List in 2021, is worth £4.33 billion, an increase of £338 million from 2020. Lewis is the majority owner of Tottenham Hotspur stadium and team.

Daniel Levy became the highest-paid Premier League chief executive, with an annual remuneration of over £6 million in the 2016–17 season. I believe since then and COVID he has taken a pay cut, however, his take is still significant. All this while the team/ squad has floundered over the years.

Since Levy became director, he has gone through 17 managers in 21 years.

He inherited Arsenal man George Graham, who was eventually sacked. Then Pleat, Hoddle, Pleat (again), Santini, Jol, Alan & Inglethorpe, Redknapp, Villa-Boas, Sherwood, Pochettino, Mourinho, child star Ryan Mason (his testicles hadn’t even dropped) and Santo, all sacked. The two longest-serving managers under Levy’s control were Harry Redknapp and Pochettino. Pochettino came the closers to winning something, but because he couldn’t buy the players he wanted and moaned, he was fired.

Levy may be a great accountant/ businessman but is a lousy overseer of a once-legendary football club (now a Spursy joke under his administration).

Now we read (according to the Daily Mail and other papers) that Levy is worried by the prospect of Chelsea being sold quickly, as it could impact the worth of Tottenham. Yes, Levy is concerned that a speedy, cut-price sale of Tottenham’s London rivals could have an impact on the value of Spurs and presumably the pennies that are going into his pocket.

As we can see, greed is on the mind of the owners rather than the team/ winning trophies. To progress further, we need a new club regime to put the team’s ambitions above the other clown acts at the stadium, and that won’t happen while Levy oversees our Spurs.

I also believe that any club sale must also allow Levy to still be the chairman of Tottenham stadium. If that is the case, then he is having a laugh. Twenty-one years of failure is not a good thing to put on one’s curriculum vitae to turn future buyers’ heads… unless those buyers are not interested in the team side, but more interested in the stadium as a money-making cash-cow circus.

Now we’ve got one of the best managers (Antonio Conte) in charge of the team and is changing the mindset of the players we wait for Daniel Levy’s actions over whether he will sack the successful manager and replace him with a Levy yes man that will have to get any worthwhile purchases from Spurs academy, thus saving the club more money so that it can be invested in other areas.

To Daniel Levy, success must be done on the cheap and not challenging the likes of City, United, Chelski, Newcastle and Liverpool with top money.

But I must add (to be fair), with the recruitment of Conte and the promises made to him (allegedly), has the leopard changed its spots from cash signs to winning signs for the club? In other words, has Daniel Levy finally learned that after 21 years of failure on the field, that to get success, he must seriously invest in the team, or will it end up Same-old-same-old? That is the question we are waiting for, and that question should be with us in the summer. What is your take on it?

3 thoughts on “Daniel Levy: one flew over the cuckoo’s nest”

Match Report: Woolwich 3 Spurs 1 (what a load of…)

Match Preview: Spurs vs Leicester City (back to winning ways?)