Some pundits are calling our match against Roma in our last pre-season friendly the battle of the giants (Conte v Mourinho).

As fans will know, Mourinho managed us for a short while and, whilst at the club, took us to the League Cup final (against City) before Daniel Levy, in his wisdom, sacked him and put a child-star (Mason) in charge, queering Mourinho’s pitch (and of course losing the final in the process). Since then, he has said a few choice words about how he was treated at the club. Still, it all worked out in the end for us… (and probably for Mourinho)… we’ve got Conte, a far better technician than Mourinho.

Mourinho’s exit from Spurs triggered Nuno Santo’s unsuccessful spell in charge of us before the club eventually appointed Antonio Conte in November 2021, where he worked wonders rejuvenating a tired and weary team. A team also with players that had passed their sell-by date and/ or inadequate.

Previously to this up-and-coming game, we played Glasgow Rangers, which I went to, and we (as in the club, not me personally) beat them to win the Walter Tull Memorial Trophy 2-1.

I had a fantastic trip to Glasgow and Ibrox to see some of our newcomers debuts for Spurs at that game. You can read more in my previous blog: link “HERE”

Daniel Levy has heavily backed Conte in the summer transfer window, with £90m worth of new faces arriving at the club, more to follow (hopefully).

The battle between Conte’s Spurs and Mourinho’s Roma occurs at the neutral Sammy Ofer Stadium in Haifa, Israel. It kicks off at 7.15 p.m. BST on Saturday, July 30.

Who could feature for Spurs?

Conte has looked to ease his new signings into his starting XI during pre-season, with Fraser Forster, Richarlison, Clement Lenglet, Ivan Perisic, Yves Bissouma and Djed Spence all featuring.

However, and as I see things, Conte will go with his most potent options, with Spence and Bissouma potentially drafted in to start.

Even though this is a friendly game, I am sure that Mourinho will want to put one over on Tottenham and put out his strongest squad. Nevertheless, I don’t believe Conte will worry about Roma’s manager’s petty squabbles and will put a team out that will do a reasonable job, bearing in mind our game against Southampton. 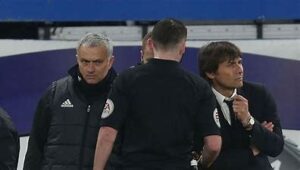 Even though we should still be after one or two more recruits (a creative mid-fielder being one of them), we will still have a strong squad going into the start of the League season. It will undoubtedly be more of a potent team than we had the previous season.

Not only do I expect us to be in the top four by the end of the season, but challenge for the League Title, and maybe a trophy thrown in, as well.

People talk about Liverpool and City and how strong their teams are (potential winners), but – and as I said before in my previous article – we did the double over City and drew twice with Liverpool. All title-winning teams usually lose by one or two matches, so just worry about the other teams. Liverpool and City will be taken care of when the time arises; I don’t believe it will be impossible to challenge for the Title and could even win it (fingers crossed). Conte is a manager who would want nothing less. He is a fighter and probably the best manager since Keith Burkinshaw; hopefully, he will surpass even him and aline himself with our legendary Title winning managers Arthur Row and Bill Nicholson.

Even if there is no football, the stadium keeps dragging you back. You can’t keep away from the old girl! I won’t be attending the Roma match as I will be at the Lady GaGa concert this Friday (29th) at the Tottenham stadium, no less. I was even at the stadium for the Boxing match when Anthony Joshua was defeated by Oleksandr Usyk and lost his World Title belts (September 25 2021).

Match Report: Spurs 4 Leeds 3 (and the show goes on)