Match Report: Marseille1Spurs 2 (what a trip and game!)

Before we go on to the match, let me tell you about the trip.

We left early on Tuesday morning (3 am) and got to Luton Airport at 4.15. Luton airport was badly signed posted; we went around and around until we found the “Short stay” parking area. That was a bit of fun…

We travelled with Sports Options. The plane departed at 6.30ish (that was late), and we got to Marseille at 11.30ish (their time).

Because of the hostility, other clubs have received at the hands of the Marseille supporters, many of our fans decided to return their tickets to Tottenham. But there was still a fair amount of Spurs supporters out in Marseille… not a full complement, but it was enough. Mel, Steve and I were in the A Category section (the neutral section where both sets of fans can sit together).

We had lunch and hung around various establishments. The police were there in numbers but didn’t do anything or harass us… they just let the merriment of Spurs supporters play out.

Eventually, Spurs supporters were herded to a central point and put on buses for the stadium. We had to wait until 7.15 pm when a special VIP coach was put on for us (yes, all of 32 Premium members).

While we were waiting for our coach, the French police kept coming up to us to move us on or direct us to Spurs coaches. Luckily the Head of Tottenham Stewards, Levi Harris, was nearby to inform them that we weren’t with the rest of the herd but “VIPs”. That made us laugh… Not the way we were dressed, we weren’t!!!!

To be fair, because of the warnings, there weren’t that many (brave, stupid or not) with Spurs clothes/ emblems on. Nobody wanted to take the chance (and we were warned beforehand).

Once the Category A supporters coach left, we were driven to the stadium and escorted to our seats. All were very polite and showered us with kindness.

Just one thing; before we left, Tottenham sent out an email of Dos and don’ts. Two of the things it said were, “no battery packs” are allowed into the stadium or “bags (less they were small)”. I decided to take my battery pack, anyway… along with a bag. Once at the ground, nobody checked our tickets, my bag… nothing… zero… I wasn’t arguing. But good security, anyway! Ha, ha, ha…

Section of the stadium was sectioned off because of previous trouble. We (Cat. A) sat together with Marseille supporters, who looked at us in puzzlement.

I must say, as per usual, our first half was totally shit. I Predicted that they would score (going by the way we were playing), and score they did. However…

… we went through to the Champions League last 16 as Group D winners after scoring in stoppage time to beat Marseille on a dramatic and hysterical evening in France.

Pierre-Emile Hojbjerg struck in the 95th minute to secure our progress to the last 16 on a night when we were once heading out of the competition. Granted, we needed a draw to qualify for the knockout stage, but Marseille took the lead through defender Chancel Mbemba on the stroke of half-time. To say we were pissed would be an understatement. At that stage of the game, we had dropped to third in Group D and heading to Thursday night football (Europa League), then Clement Lenglet equalised early in the second half, and we jumped up as mad people possessed. The Marseille supporters looked at us in horror and anger. A few threatening gestures went our way, but nothing more. God knows what will happen – we thought – if we scored to win the game!!!!!

I know I was rushing ahead a bit… now back…

We were holding on desperately late on, but as Marseille pushed for the winner, they were caught on the break, and Hojbjerg sealed victory for us.

Again we celebrated, pushing the Marseille supporters to the limit… but all they did was get up and leave in disgust. We continued our celebrations. Then just as we scored, the referee blew the whistle to end the game.

The only incident was when Mel got pelted with something as he stood to applaud the Spurs team. But our security and theirs quickly leapt into action, and nothing further happened.

It was an intense evening as results throughout Group D had a bearing on our progress in the competition and made for anxious viewing. Sporting Lisbon’s 2-1 home defeat by Frankfurt meant we eventually finished top, but at one point, they dropped to third in the group,- heading out of the competition, and their position changed six times during the match, with three different teams topping the table during the evening. That was dramatic… we watched on our Mobiles as our League table kept changing.

The stoppage-time winner by Hojbjerg also saw Marseille finish bottom of the group (so you can see why their supporters were pissed), meaning they missed out on a place in the Europa League as failing to progress to the knockout stage of the Champions League. They got what they deserved because of their fans’ troubled behaviour throughout this tournament.

We were under pressure for large spells; former Woolwich striker Alexis Sanchez and Jordan Veretout were denied for Marseille before we improved in the second half. Our tactics lately have been shit in the first half, and then we come out in the second half as reformed fighters.

Harry Kane was inches away from getting on the end of a cross to make it 1-1 just after half-time before Lenglet capitalised.

Later Kane had a goal disallowed when he was clearly offside before Hojbjerg fired the ball against the crossbar.

But it didn’t end there… oh, no… Marseille had a glorious chance to make it 2-1 with less than 10 minutes remaining when Sanchez’s shot was blocked by Perisic from close range before ex-Woolwich defender Sead Kolasinac headed wide while unmarked.

Finally, the whistle went…  however, fifteen minutes before the final whistle came, one of their Hospitality ladies came up to me and suggested that we leave 10 minutes early… I declined… lucky I did, as we would have missed the winning goal. All it meant was that we had to wait until the Marseille supporters left.

Our players were up against it, as they arrived at a hostile Stade Velodrome, which was not full as punishment for recent crowd trouble but nonetheless vociferous.

Fireworks were set off in streets around the stadium, which we witnessed as the coach travelled to the stadium. This was also before and during the match, while Marseille supporters gathered in clouds of smoke from flares to boo at the team and us.

Another noticeable thing, we were also without Conte as he served a touchline ban following the draw with Sporting Lisbon, but he/ we knew a point would see us advance to the knockout stage.

We have never beaten a French team away from home in Europe, and we were on the back foot in the first half with Hugo Lloris, the busier goalkeeper.

Son suffered a heavy blow to the head. He struggled as he was helped off the pitch and down the tunnel following a four-minute stop in play for treatment. He was replaced by Yves Bissouma a minute later, with us playing with 10 men temporarily. Hopefully, he will be back soon.

The second half was much improved by us, but at times we were cagey in defending our point, and it almost allowed Marseille to cause an upset.

In the end, Marseille’s push to find a winner cost them European football for the rest of the season, while we sneak through with three wins from our six group matches. 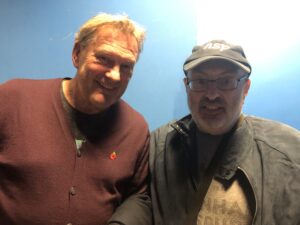 After the game, we were escorted to the Sporting Options coaches. However, as we waited by the lift to go down, who should we bump into but none other than our Spurs Legend Glenn Hoddle. And, yes, I got my photo taken with him… plus, we chatted about Conte and Spurs for a while. Very interesting! After that, he and those he was commenting on the TV with, left while we waited for the next lift.

Once out of the lift, we made our way – with escorts – to our coaches. From there to the airport and home. A few holdups at the airport, but nothing serious. I got home at 5 am, Mel an hour later.

Thoughts on security and trouble or not.

With all the fear circulating of retaliation by the Marseille supporters, we were apprehensive. But in the end, not a Dickie Bird. We were well protected by the French police and Spurs & Marseille stewards. No trouble, no problems. We couldn’t have felt safer. That was so long as you followed the guidelines (and we did). Those who stayed away because of fear… you missed one hell of a day…, and now we are through, there will be more to come.

Match Report: Spurs 4 Leeds 3 (and the show goes on)