Review: Wolves 1 Spurs 1, a disaster or just a hiccup?

In my previous article (preview of the Wolves/ Spurs game) I said, “it is imperative that we win, anything else would be a disaster.” The only positive I can say about the Wolves/ Spurs result is that Liverpool, United & Leicester City drew, while Chelsea lost. The downside was that Manchester City won. We are currently 5th, six points behind league leaders Liverpool. Above us is Everton, Leicester and United. City and Villa, who are under us, have games in hand. So, it isn’t a total calamity; nonetheless, that opening (between us and the top four) could undoubtedly turn into a  chasm. Although I can’t see how we are good enough to challenge for the title at this point in time. Not impossible, then again, it looks doubtful unless we buck our ideas up. 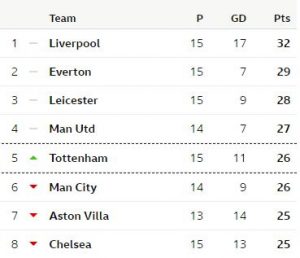 I listened/ watched the game on the radio and iPhone app and as both were slightly behind it didn’t help that I got texts to say that we/ they scored. The sad thing was that once we scored we eased off and you could sense that they would equalise. Same-old-same-old. That is why we are called “Spursy,” so much so that they put it in the dictionary.

We’ve had a great run beating Arsenal & City and drawing against Chelsea and getting through the knock-out stages in the Europa League and then Semi-Finals of the League Cup that we started to think the world was ours. Then the predictable nose dive. I could have strangled a few cats, I was that pissed off.

With four minutes to go, the inevitable happened, Romain Saiss produced a header that ended our chances of taking three points away from Molineux, another shit result. We led for 85 minutes after Tanguy Ndombele had scored a low 20-yard shot from Ben Davies’ lay-off after just 57 seconds. At that point, I thought this was going to be a gold rush; instead, it turned out to be a whimper. We dominated, and one would have thought that we were going to get the spoils.

Kane and Son rarely got a clear sight of goal (and they looked tired), although Sergio Reguilon might have made the game safe for us, we paid the price for retreating too far into our shell.

After the game, Mourinho said it was never his intention to defend a one-goal lead and questioned his players for not showing more ambition to go for more goals. He told a TV commentator: “Defending deep, that’s not the intention. They know what I asked them at half-time, if they couldn’t do better, it’s because they couldn’t do better.” He then went on and said, “We are frustrated with the result. We had control of the game, but we had 89 minutes to score more goals, and we didn’t. It was not just about not scoring goals, it was also about not being dangerous and not being ambitious. For me, that’s the problem.”

We could have gone third if we had won; instead, we moved to fifth.

Outstanding Ndombele. He was back in the side after missing the Carabao Cup win against Stoke in midweek. When we played Burnley last March in the game immediately before lockdown, Ndombele was hauled off at half-time, with Mourinho complaining afterwards the midfielder had failed to follow instructions. What a turn around since then for him.  Kane and Son have been attracting all the attention, while Ndombele slipped under the radar (for a little while) then he started delivering the performances his price-tag demanded.

Amazingly, it was only the fourth Spurs goal this season that has not involved Kane or Son.

Ndombele’s best work was through holding his position and not allowing the Wolves attack to come through.

One interesting point, usually, when a player leaves the pitch, Mourinho usually goes over to him to congratulate or show sympathy, this time around he jumped out of the dugout to deliver instructions and wholly ignored the man he had brought of; interesting. Maybe not all is well between them. Or I am just reading too much into it?

Where do we go from here? Six points behind the league leader isn’t an abyss, yet, but we must improve, we must start getting our act together and once in the lead hold it and also try to build upon it. Otherwise, it will be another season gone, with many questions demanded by the fans and pundits.

We have dropped nine points in 2020/21 with goals conceded in the last 10 minutes of matches, the most of any side in the Premier League.

Since the start of the 2018-19 season, only Liverpool (45) and Manchester United (44) have won more points from losing positions in the Premier League than Wolves (40).

We are now winless in four Premier League matches, our worst run since a four-game run between February and June earlier this year.

Four of Saiss’ last five Premier League goals for Wolves have been headers scored via a corner.

After only 57 seconds, Wolves conceded the earliest goal they had conceded in the Premier League since April 2012 against Swansea City (Andrea Orlandi, 22 seconds).

Wolves’ starting XI for this match featured seven Portuguese players (Patricio, Nelson Semedo, Neto, Joao Moutinho, Silva, Podence and Ruben Neves), the joint-most non-English players from the same country in a team’s starting XI in Premier League history: Fulham had seven French players in their XI vs Middlesbrough in 2003, and Newcastle had seven Frenchmen vs Liverpool in 2013.

We have a bit longer to prepare for our home London derby with Fulham on Wednesday, 30 December (18:00 GMT). Enough time to knock a few heads together and get some order in the team. That is a winning order or mentality. To lose to Fulham would be a disaster. We can’t keep relying on other clubs to slip up.

Until next time, stay safe… and let us hope we get back to normal ways quickly and start going to the games so that we can start cheering our team on to success.