What an exhausting and emotional day (and I am not just talking about the football).

Jumping to the end of the game; as soon as the final whistle went, more booing and louder. I say more booing, as there was booing throughout the game, but mixed in with support and applause. But it intensified after the final whistle. Amongst the booing, there were loud cheers for Kane. There was even a section of the crowd singing #Levy is a Count# Either they were suffering from dyslexia, or I am deaf… or Levy is a member of the House of Lords. Anyway… they sang his name! But before all that…

On Tuesday, I travelled to London and stayed with Hanna, as I had a Bank appointment at lunchtime and then afterwards back to Goodmayes, change and to the ground. As I said in a previous article, I didn’t initially get a ticket, however, a friend who did, couldn’t go, so he managed to transfer it into my name. Because he is up in the pecking order, he had a car park space under the stadium, so I parked there. And that was an experience itself—a massive car park for hundreds of cars.

Once parked, I made my way through corridors, up some stairs, through doors until I finally got to a lift and was taken to the third floor. Once up, I had to walk back down to get my programme. Then back up again and met Stephanie & Daniel (who are Premium staff), and we had a nice chat. Then I met my friends, Stefania, Ollie (her son), Steve and Terry. We sat down, chatted, speculated on the results and the problems of the club and who could be our next manager. We were there two hours before the game and went in 10 minutes before kick-off. But before all that, we sat down for a nice meagre meal and a complimentary glass of bubbly wine (we managed to get served another lot of complimentary drinks because the app/ service stopped working). Finally, to the game. 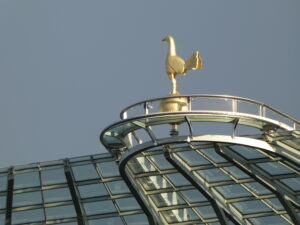 Most of us, if not all, weren’t in our usual seats but in the same block. As you can guess, or saw on TV, plenty of gaps with a large portion of the stadium closed off.

The teams came out to loud cheers… then the Knee (that is, the players) back up and the whistle was blown. More cheers!

To cut a long story short, our hopes of securing a place in Europe were dented as Villa came from behind to claim a victory at our Tottenham Hotspur Stadium.

The fans chanted almost immediately,  “He’s one of our own”. Steven Bergwijn’s thumping eighth-minute opener gave us fans something to cheer about, but it was all downhill after that.

Villa responded 12 minutes later, or I should say, we answered for them with a Sergio Reguilon own goal. He sliced Nakamba’s cross into the top corner of Hugo Lloris’ goal. Silence… then some booing. Ollie Watkins completed the misery just before half-time, collecting Reguilon’s weak clearance and holding off the challenge of Eric Dier before finding the bottom corner.

Watkins was impeded by Lloris on either side of half-time. Although we did test Villa keeper Emiliano Martinez more regularly following the restart through Bergwijn and Kane, but we failed to find the back of the net. Finally – as if somebody was putting an injured animal to sleep, it was all over, as the referee blew his whistle.  Then the loud booing intensified and could be heard around the stadium as it bounced off the walls and seats. Some supporters even stayed long after full-time to keep on protesting.

With Wet Spam winning that evening, we dropped to seventh. We are level on points with Everton going into our final game against Leicester City on Sunday. 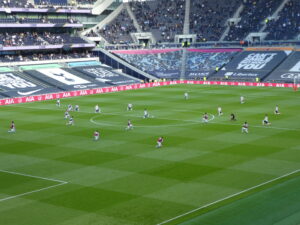 We were very poor following Bergwijn’s excellent opener, but with Villa winning it is unlikely to do much to convince Kane that he can win silverware if he stays.

We were slightly better after the interval, registering more shots in the first five minutes (four) than in the entire first half – although Bergwijn’s attempt from close range was the closest we came to earning a valuable point.

Even when Gareth Bale come on, he couldn’t inspire a fightback; indeed, we were second best for large parts of the match. As for Japhet Tanganga, he went off with a bad injury.

We currently occupy a qualification place in the new Europa Conference-failure-League play-off round. Still, we will have to win away at Leicester on the final day and hope the Spammers lose to Southampton if we are to claim a Europa League spot. On top of that, the Gooners are two points behind us, and Everton are on equal points with us; if we should lose and they both win, then we will drop to 9th and no European football of any kind for us next season.  Whatever the outcome on Sunday, it looks set to be a summer of significant change at the club. But what that change is will depend on Levy’s pockets and how much he wants to compete with the other five elite English clubs.

On Harry Kane, he added: “He means a lot. He’s a Tottenham player. I’ve answered so many questions on Harry Kane in the last 24 hours. I’m willing to speak about the game but not individuals. We were fully focused on the match, and I’m very disappointed.”

Speaking on BBC’s Match of the Day, Alan Shearer said: “Yes [I think that was Kane’s last home game for Spurs] and I don’t think anyone or any Tottenham fan would hold it against him. He’s given absolutely everything for the club. He’s been magnificent. For all we know, he might have asked to leave last summer, and they’ve persuaded him to stay one more year. There are some big hitters after him. Manchester City will need someone, Manchester United will need someone, Chelsea will need someone.” As I have often said, I am surprised he has lasted this long; we were never going to win a major trophy (Premier League or/ and European Champions League) under Levy’s control. 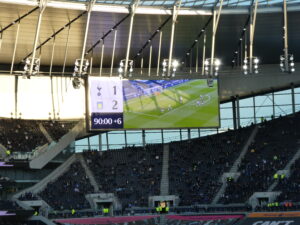 After the final whistle, we all made our way to the second-floor lounge, where we just sat there nibbling at our freebies. Then we got up to leave – not in the mood to stay for a drink – and bumped into Gary Mabbutt, Ossie Ardiles, Graham Roberts and Pat Jennings. They all didn’t think Kane would stay and said, “what sorry state we’ve become”. As we were talking – in the lounge area – we could hear the boos and chants penetrating the walls. And even a few Stewards/ security guards got verbal abuse.

I also noticed, looking out on to the High Road, banners proclaiming “ENIC out” etc and protesters near by.

And what an excellent record by Daniel Levy, a magnificent stadium but a team that would be better suited anywhere else other than challenging for top trophies. As somebody said, “We’ve got a Rolls Royce car with a Robin Reliant engine in it.”

We suffered our first home league defeat under Ryan Mason and our sixth overall this season – our most since 2014-15.

We lost our final home Premier League match of the season for the first time since 2015-16.

Aston Villa won their ninth away Premier League match of the season, their most in a single campaign since winning nine in 2009-10.

Villa also registered their first away top-flight win when conceding the first goal since August 2013 – they had been winless in 52 such games.

Villa striker Ollie Watkins has scored 14 Premier League goals this season, the most by a player in their debut season in the competition since Alexandre Lacazette in 2017-18 (also 14), and the most by an Englishman, in their first season since Charlie Austin scored 18 for QPR in 2014-15.

We end our campaign away to Leicester City at 16:00 BST on Sunday.

The End, or near enough

After that long day, I went to the underground car park where I retrieved my car and made my way to my daughter’s – near Hungerford – to get my dog and then home. Finally reaching my destination at 11.15.

I am fearful of who Daniel Levy will pick as our next manager and what he will spend on our team (a team that needs rebuilding). It could be another season of struggling just to put our heads above water while our season tickets and hospitality continuing costing more and going even higher (along with Levy’s and the Board’s wealth).

All the best, Glenn (be safe)!