One of our former players, Ramon Vega, has said that Levy (or if you prefer, the club) should refund everybody who was at our game against Villa because of our poor performance. Or at least offer some sort of credit.

It was our first opportunity to witness us playing in the flesh since the coronavirus restrictions were eased by Boris Johnson.

As you are already aware, the club had come under hostile attack before the game for their decision to charge supporters £60 each for the privilege of attending our luxury stadium, which is double the cost of what our rivals the Gooners have set for their last home game. However, I would imagine one of the reasons why Levy and the board were charging us so much was because they believed our quality of style and winning performance was far superior to the rest, so they (the board) agreed that we deserved to pay more. And that Arsenal pay less because they are well under us and haven’t won a trophy in the last 20 years of Levy’s reign (I supposed you’ve spotted the fault in this statement, but keep it hush, we don’t want to upset the disillusionment of Levy and co).

Now chubby Ramon Vega took to Twitter following our magnificent game (sorry, defeat) to Villa to voice his opinions, which I am sure the board and Levy, including Joe Lewis, are grateful for. He wrote, and I quote: “To be honest I think the best thing and the most honourable thing the club can do is to refund the £60 to the home Supporters or put a credit for future games to watch. NOT GOOD ENOUGH.” 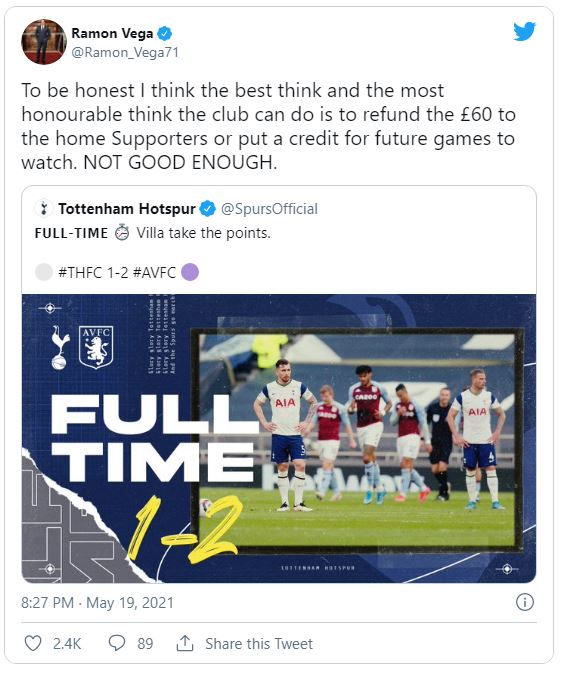 For those that are too young to remember Ramon Vegas, here are some details:

In 1996, Vega moved to Italy with Cagliari Calcio in the Serie A. After only seven months, he signed for us, for a transfer fee of £3.75 million. He was primarily used as a backup and helped us to win the Football League Cup in 1999; in the final, a 1–0 win over Leicester City, he broke his ankle and could never regain his previous form.  He was released by us in June 2001; after playing for a few different clubs, he retired in 2004, aged 33.

Do you think he is right? Not about Vega’s Spurs career, but about Levy giving us our money back? Of course, I expect Pigs to fly instead, but your opinions would be interesting.