Shame and scandal over Kane, by Levy and the board

It has been revealed that Harry Kane was due to receive five Player of the Year awards before our game against Aston Villa on Wednesday. Then the club suddenly backtracked over going ahead with the presentation.

The 10,000 supporters were hoping to see the presentation but the powers that are pulled the plug. Instead, they were allowed to witness a fantastic football spectacle as Ryan Mason’s team put in a shocking display against Villa. And even that spectacle flattered us, as Villa could have had more goals.

As we all witnessed, Kane was emotional during his lap of honour around the pitch after the final whistle, in his farewell lap of honour.

One of the national papers claimed that Kane should have received multiple awards in front of us all before kick-off. But according to the club, the presentation did not happen due to timing issues and that the striker will receive his awards at the training ground on Friday the 21st (in front of no fans/ adoring crowd). Even though Son was given his award on the night of the match. Fishy, you can say that again. It was also revealed that Erik Lamela will receive his Goal of the Season award following his effort against Arsenal later. Some have even suggested that it was some sort of punishment for daring to suggest that he wanted to leave. 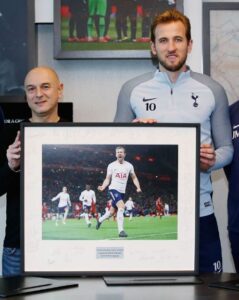 On another matter; it was reported that the squad have been left shocked by Harry Kane’s decision to go public about how forthcoming he has been about his future plans. A national newspaper claim he is now pushing hard to leave the club he has been with since a boy ahead of next season and asked Levy for a private meeting. This meeting will be to do with offers coming in for him.

It is also believed that Kane’s departure will involve him issuing a statement to supporters to explain the reasons for his decision and repeat his desire to win silverware, which he can’t do while Levy has his fingers on the purse strings.

Kane revealed in an interview that he would not want to end his career with “any regrets” and plans to sit down with chairman Daniel Levy to have a frank and open discussion about his future.

I hope that Levy realises that the mess we are in and Kane wanting to go is to do with our transfer policy, our speedy overturn of managers coming and going, and his poor chairmanship over the playing side.

Unless Levy changes his direction, we will have a super luxury stadium with an inferior non-challenging incapable team, the same as we’ve had under his tuition over the past 20 years.

We’ve become a laughing stock since Levy/ ENIC took over from Alan Sugar… or, as the dictionary prefers to categorise us, “Spursy”.

The Athletic magazine claimed earlier this week that Levy has no intention of allowing his star player to depart, despite any assumptions which Kane may have over a previous gentleman’s agreement. But if he should go, Levy will make sure that the club that wishes to purchase him will pay through every orifice that club has. In other words, Levy will want his pound of flesh and more. I also have no doubt that any money coming in for Harry will go to the Tottenham coffers rather than help build a team that will challenge the other five elite English clubs.

Agree or disagree, I would love to hear from you?