The fixtures and our first game is against Man City (who’s side will Kane be on?)

The fixture list for the 2020/21 Premier League campaign has just been announced. The season kicks off on Saturday, August 14, while the final round of matches will be played on Sunday, May 22, 2022.

We will first take on champions Manchester City at our Tottenham Hotspur Stadium, followed by an away trip to Wolves and a home fixture against newcomers Watford. But,  what most fans are asking, will Kane be playing for us, City or somebody else?

We face Chelski at our new stadium, followed by the Gooners a week later. The North London derby is scheduled for January 15, and the away game to Arsenal is on the 25th (subject to TV scheduling).

By the start of the season, we should have Paulo Fonseca in charge of the team. He will be looking to vastly improve on last season’s disappointing seventh-place finish, which just saw us only manage to scrape into the Europa Conference Failure-League on the final day with a win against Leicester City. 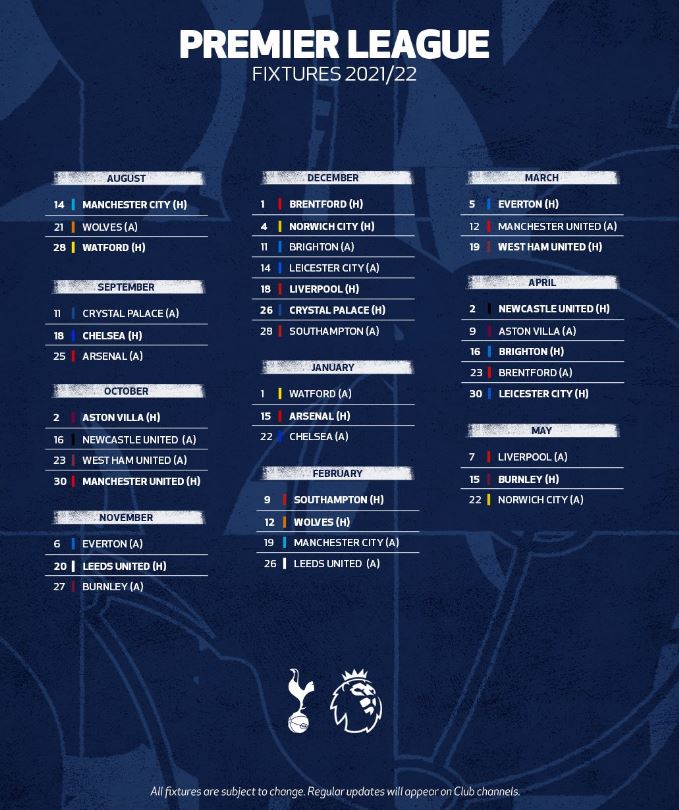 A new manager, probably some old and new players, it is a tricky season to call. With Mourinho (even though he was dismissed because of poor results), we felt confident because of his record and history when he came to us. This new guy –  Paulo Fonseca – we don’t know a great deal about him, only that he had the same record as Mourinho when he was sacked (and Mourinho was sacked). Which doesn’t build you with confidence. When Pochettino and Mourinho came to our club, at least they had a good record with their previous clubs. But, we should all get behind him and show our support. When Arsène Wenger went to the Gooners, people were saying, “who?” “Is this a joke?” etc. They didn’t quite say that when he left, even though they were out of the top four (and put a few smiles on Spurs fans faces). I am quite happy if people say the same about Fonseca, so long as he proves everybody wrong and wins every trophy going (ok, only joking, but at least he does us proud).

So… the day we all have to look forward to is Saturday, August 14 (probably will be changed because of TV) to see us face City, and I am looking forward to getting back to the stadium. I am also hoping that we can also travel away and abroad, back to normal (or as normal as possible). At least I have had my two jabs.

Take care and be safe.