Not only is Nuno our coach, an observer of mottos, especially ours (see the previous article), but he now has a peculiarity of changing dressing room floors. Well, ok, not a peculiarity as such, but none of our last couple of managers were into it. Yes, Nuno has added a pitch layout to the dressing room floor in order to assist with tactical instructions. That is putting a tactical configuration of the pitch on the floor of the changing room at the stadium. He had the same design during his time at Wolves. So we now know what tickles his fancy. Alex Ferguson preferred to throw hairdryers around to catch their attention, while Nuno prefers doing hopscotch on the football mat and hopefully, the players will play follow my leader.

Is it a good idea? Well, it all depends if it catches the players attention or pisses them off.

Half-time in football matches are usually used by managers to discuss various tactical formations depending upon the opponents’ strengths and weaknesses in the interval. It is also a time for bollocking and, if necessary, to substitute the said players who played in the first half (but were shite) with players he thinks can better impact the game.

If it helps him get his point across and we end up winning, then all well and good, but if it doesn’t affect the players, he needs to try a different tactic. 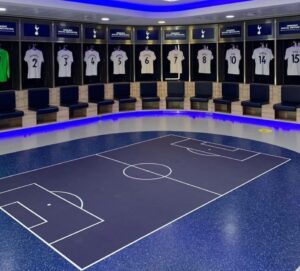 On another matter, that being on Kane and what our Ex-player, Paul Stewart, thinks if he goes.

Our former Tottenham player Paul Stewart has claimed that if Harry Kane leaves the club and we fail to replace him, it could result in us being relegated. To be honest, that is the bleeding bloody obvious.

Kane leaving could be a massive blow for us, and Stewart has made a big claim about where that would leave the club. He told FootballFanCast: “I’m just a bit concerned about what Spurs are going to do moving forward. If they sell Kane and don’t get any money for the transfer budget, I’d be concerned that they may be battling relegation next season and not fighting for the top four.”

Nothing new there, but worth reporting. I am sure the readers will have their own idea of what will happen if Kane leaves and isn’t replaced by anybody competent. Not that Kane being in our team gave us glories and an abundance of trophies. However, Kane is good at getting to the finals (including with England) and then dramatically falling flat on his face. But of course, Kane is blameless, as it is always the others.