Nuno Espirito Santo has named the club motto ‘to dare is to do’ as his favourite aspect about Spurs, but the rest is shite! OK, he didn’t say that (that the rest is shite), but it makes you wonder how he picked that above everything else; such as the academy, the players, Levy and or Joe Lewis, the money he is getting (even though it is less than his predecessors) or anything really, but, no… “To dare is to do” tickles his fancy.

As we know – or maybe not – Nuno was appointed as our manager weeks ago. The long wait is over, we had actually found a replacement for Mourinho at last (hooray!).

According to those close to the players and the club, he has now earned a fundamental understanding of what life is like at Tottenham and his squad. But putting all that to one side, what struck him the most was the club motto that can regularly be seen embellishing banners and stadium hoardings. In fact, it is everywhere, and he has picked that as his “favourite”. Amazing, totally bloody amazing… but to be fair, at least that is neutral. Anything else might cause controversy, so let us stick to safe limits. A man who will be steady at the helm of the Spurs ship… Jolly good ol’ boy!  I bet Lewis and Levy have taken to him already… 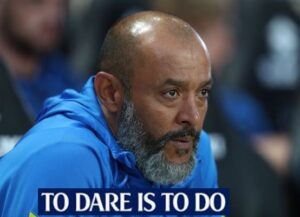 You know what they say, small minds, PLEASE!… anyway… he is happy, the fans are delighted, and Lewis and Levy are also jumping with joy (a lovely woman)… now we can all go back to our nests and hibernate for the winter.

Where did it all come from (that is “To Dare Is To Do”)? A History lesson

It comes from the Latin phrase Audeat-est-facere;  in English, ‘To Dare is to Do’. We have to go back to the 14th Century to find where that motto is linked and how Tottenham also embraced the name, Hotspur.

The year 1364 (before my time) is a momentous one in our/ the club’s history as it was the year Sir Henry Percy was born. Even though Percy was born in Northumberland (up north), Tottenham have taken their motivation from the nobleman who came to fame during the Anglo-Saxon wars and earned the nickname Haatspore (“Hotspur”)by the Scots. Because of his bravery, fame, and predilection for wearing Spurs on his boots, it earned him the nickname Hotspurs. Percy travelled all over Europe for England’s cause and in 1388 was made Knight of the Garter. In 1403, Sir Percy was struck down and killed at the height of his power at the battle of Shrewsbury, but his legacy stayed (even though he was declared a traitor subsequently a year later).

The club’s association with Sir Henry is because his family-owned large parts of the land where the club is today, making it a perfect link and the picture-perfect way to differentiate the club. It is believed that the motto Audeat-est-facere was chosen as it reflects Sir Henry’s fighting spirit, speed and bravery, despite only living to the age of 39. Of course, it all could be bollocks, but we’ve accepted it, and it is now part of our History, SO THERE!

Tottenham Hotspur would not be the club it is today if it wasn’t for the History of Sir Percy. A bit like Arsenal, they wouldn’t be the sneak thieves they are today if they hadn’t sneaked into our territory in the dead of night, claimed squatters rights and stayed stuck to the ground called the Highbury area! In the process, annoying every Spurs fan everywhere!

So that is the story of “To do is to Dare,” plus a bit more. Lesson now over and back to the pleasing-smiling-face of Nuno Espirito Santo, don’t you just love him? In a non-sexual way, that is!

Be safe and don’t forget, To do is to Dare!