So, how did the Gooners and Spurs do? I am in a WhatsApp group, and when I predicted we would win 2-1, they laughed, thought I was “delusional”, and that we would either draw (at best) or lose heavily. But we won and won convincingly. I also predicted that Brentford would beat Arsenal, and some even thought I had lost it.

I started off the day going to the gym (a painful exercise: a few days earlier, I fell down the stairs, landed on my dog and in the process broke my toe, so that is what I meant by a painful exercise). After the gym, I went back home, showered and then got ready to go to Spurs. The excitement in me was reverberating through my body… I left about 9.50 am and got to my car parking place just before 12.00. Then I hobbled to the Spurs shop; still no X-large Aways kits, went back to my car to rest my foot. About 1.15, I made my way – or hobbled my way – to the Premium Entrance and waited in the queue. Started chatting to those around me and eventually went in at 1.30. I went through the security checks to the Spurs Kiosk to get my free programme and up the elevators to the third floor. Found my usual seat next to the Spurs restaurant and waited for the others to Turn up. I did meet a new guy (Darren) who joined us as it was his first time to the Premium area of the stadium (it was a one-off for him), and then Janet turned up first. Chatted, she bought me a drink and then others came: Terry, Kevin & Glenn (both new recruits to our Whatsapp group), Joanna, Colin, Steve, Ian, Tim and Liz, Stefania, Ollie and Beverley. Great to see old friends. The food (which was free) went down well, more chatting. Oh, everybody took the mickey out of my sandals and socks (which I had to wear because of my broken toe);  all asked how the dog was!

Then we made our way to our seats (at 4.25), shaking hands with more friends/ seated neighbours. 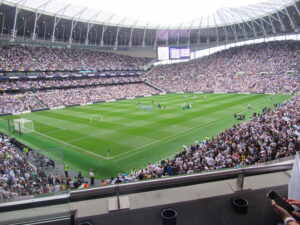 On our seats were Spurs flags, and they were used vigorously when the players came out. What a sight, what an atmosphere (see photos). The players took the knee to loud applauses, then we waited for the kick-off. More loud cheers, and we were underway!

As for Harry Kane (who?), well, the fans made light of his absence with a fantastic win over the League champions Manchester City and their £100m man Jack Grealish.

Kane’s sidekick Son was able to shine without our goal scorer by his side. Yes, it was Son who gave our new Coach, Nuno Espirito Santo, the picture-perfect start to his reign with a shot that whipped beyond the City goalkeeper, Ederson, 10 minutes after the interval. We totally warranted our win as we endured a wobbly opening to play with purpose, showing the Nuno trademark with good defending.

As for City’s £100m player, well, he had a quiet debut, being shown a yellow card in the game, but it was actually us who had the best opportunity after Son’s excellent goal, only for Steven Bergwijn to shoot wide when going clean through.

City did have a few but fleeting chances but rarely examined Hugo Lloris’s credentials as they looked like a rusty old nail in juxtapose to our sharpness. 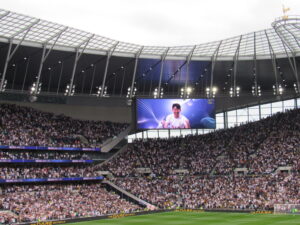 Some of our fans taunted City over Kane by reminding Kane what he might be leaving behind… this is a new season with a new coach and new hopes. If Kane does leave, could he end up being on the wrong side of the park? Just watching the trophies pass him by?

Our fans also sent a chanting cry of ‘are you watching, Harry Kane?’ which resounded around the Tottenham Hotspur Stadium.

As for stand out players, they all were (that is for Spurs), such as match-winner Son, the outstanding defender Japhet Tanganga and the tireless Lucas Moura, to name but a few. 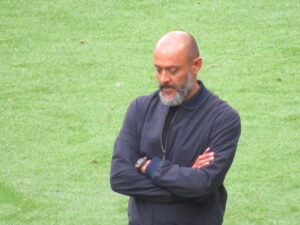 Nuno Espirito Santo told Sky Sport: “It was good, I think. The atmosphere was special off the hard work of the boys. They make any crowd proud when they work so hard. t was strong. We were lucky because they had chances, but the boys held on, and they stayed in the game. We knew it would be tough. After that first 20 minutes, we did better, and we started getting our chances. In the first half, we didn’t finish so good. When we should have shot on goal, we didn’t do it. Not only him [Japhet Tanganga]. In terms of shape and our organisation, the front three worked very hard and closed the gaps. It’s very difficult to play against City with the way they build the first moment. It requires a lot of discipline, so the boys did OK. I’m sure that with commitment and the talent we have, we will be a good team. We are in the process of that. I am learning every day, and I am very proud of them today, very proud.”

On Harry Kane: “Look, Harry Kane is one of the best players in the world, honestly. We are very lucky to have him. He has to get ready and help the team. We still have to go to Portugal, then we think about Wolves. Harry, like Bryan and Cristian, they joined us later, so for Cristian and for Bryan, it was very important to be with us today to feel the atmosphere and feel the meetings. Harry worked this morning, and he is preparing himself. When he’s ready, he will join the group and the team.” 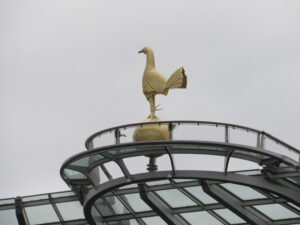 After the final whistle went

When full time was up, we were told that 4 minutes were added on, so I put the stopwatch on my phone, we then waited with bated breath as the seconds ticked away. Finally, the whistle was blown, and the crowd – we – went crazy with joy (a lovely woman), flags were got back out and waved all over again (and again energetically). We applauded the team. I then went to where my friends were sitting behind me, and we chatted and then made our way to the second-floor lounge, on the way taking popcorn and cakes with us (all free).

We got to our seats, and it was like a gathering of the joyous and most happiest people alive; we were ecstatic. Terry and Steve bought bottles of Red wine to share (I couldn’t drink as I was driving and had a drink earlier), photos were taken, and hugs were like confetti at a wedding, everywhere. What a fantastic return to our spiritual home. The icing on the cake was meeting up with old friends. Micky Hazard & Graham Roberts joined us, also old friends. Sadly everything comes to an end (until the next Match).

However, I must add that one of the players that joined us said that Kane will leave (“a done deal,” he said). Was that inside knowledge or just his personal prediction? We’ll have to wait and see.

We also met our new handler (Premium Sales & Membership Executive), Hannah, who took over from Dan, who had left). A lovely lady who was very obliging and friendly.

Sadly the time came (7.50pm) to leave the others, still celebrating, as I had a long drive home to Berkshire. Finally getting home just before 10pm. But I didn’t go straight to bed, as I watched Match of the day 2  and our game against City. Now that was a truly great day, and I can’t wait until the next Match against Wolves (A).