Our chairman Daniel Levy has been voted onto the executive board of the European Club Association (ECA). Before he was elected, Manchester City’s Chairman Ferran Soriano had been competing with him to replace Manchester United’s Chairman Ed Woodward on the ECA board after he stepped down from his position in April.

The Athletic web magazine said that Daniel Levy won backing from Premier League clubs including United, Liverpool and Arsenal. At the same time, Soriano had received support from Chelsea as well as the Spanish clubs. The ECA have just stated that Levy will be the Premier League representative on the board while Inter Milan Chairman Alessandro Antonello and Atletico Madrid CEO Miguel Angel Gil will represent the Serie A and La Liga, respectively.

Levy is certainly making his mark in football. He started off life as a humble businessman, then, with ENIC, took over Tottenham and started to build it in his image, now one step higher with the European Club Association. Where next?

Where did Levy initially come from?

Daniel Philip Levy was born on 8 February 1962 (the year we won the FA Cup). Levy was born in Essex. His father, Barry Levy, was the owner of a clothing retail business. So he had a golden spoon in his mouth when born.

He says he is a lifelong Tottenham Hotspur supporter and attended his first match at White Hart Lane against QPR in the 1960s.  He went on to study Economics and Land Economy at Sidney Sussex College, Cambridge. He graduated in 1985 with a First Class Honours Degree (all helpful when pulling down the legendary White Hart Lane stadium and building a money machine stadium in its place, but not yet created a reputable powerful team).

After graduating, he went into his family business. At the same time, he was also involved in property development and several other companies. He then formed a business association with Joe Lewis and became involved in an investment trust called ENIC International Ltd that specialised in football, entertainment, and media. Eventually, he was made the managing director of ENIC in 1995. Levy and his family own 29.4% of the share capital of ENIC, while Lewis owns 70.6% with controlling interests. From there, he went on to have shares in the Scottish football club Rangers and eventually gave them up before taking over at Tottenham. ENIC also had stakes in other European football clubs, including AEK Athens, Slavia Prague, FC Basel and Vicenza (all now sold). 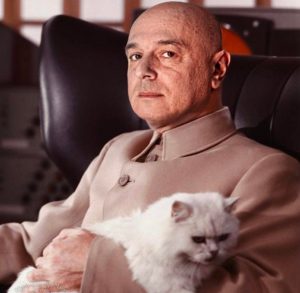 Daniel tried to buy Tottenham Hotspur from Alan Sugar in July 1998 but failed, but not to be beaten, he gave it another shot, which again was rejected (2000). Eventually, he persuaded Sugar to sell the club to him. From owning the club, he was ultimately appointed to the board of Tottenham Hotspur on 20 December 2000, and the rest is in Spurs history.

Levy’s highlights were winning the League cup in 2008, a Champions League final place, several League Cup finals and eventually pulling down the White Hart Lane stadium and replacing it with a powerful-money-orientated machine.

What next for Levy?

Levy is money orientated, not (yet?)trophy orientated. His goal is to get back into the top four (where the money is) and redevelop the stadium’s surrounding area so that it brings even more money in.

Getting on to the board of the European Club Association is another accolade to his ultimate goal… whatever that is. Some fans have suggested (supporters of Levy) that a statue should be erected outside our new stadium in honour of him, while others have suggested something along the lines of Guy Fawkes.

Whatever people think of our chairman, the club’s future is in his hands, so, love him or hate him, we have no other choice but to follow him (whether that is screaming and kicking or sycophantically bowing and scraping).

Match report/ disaster (?) the game that never was, and yes, I travelled there!