This is a match report of sorts; we had a crap result at Arsenal, Luckily for me – and you – I can partially bury the Arsenal game by talking about the Weekend as a whole.

My Weekend started on Saturday morning; gym, flu injection, home, shower and then left at 10.30 to the Tottenham stadium (for the boxing). I left so early because I was concerned about the parking at Tottenham and whether I could park near the stadium or would I have to go to Turkey Street or Enfield to park?

I got to Tottenham at 1pm, and as I entered White Hart Lane, I noticed a car park; I ignored that and tried to find something nearer to the ground. I then drove around the stadium – nothing – and then made my way back to the car park, which I initially had seen (off WHL road). They charged £30, which I was grateful for. Chatted to the attendant and then made my way to the ground.

Then to the Spurs shop to buy some boxing merchandise,  then Sainsbury’s for a cappuccino and something to eat. Back to the car (to deposit my purchases) and then back to the ground. As I walked back, I  noticed other car parks opening up. By then, it was too late as I had already parked up and paid. Chatted for a few hours until the doors opened at 5pm.

Once in the stadium, then up two escalators to the third floor. I went to the restaurant (included in the ticket price), had a complimentary glass of champagne, and then started a three-course meal. Also ordered a large glass of wine (I wasn’t going to be driving for a good six hours) and then looked around and chatted with staff and people I knew. As the table was mine for the evening, I popped in at regular intervals (up until the main event started).

There were a few fights before the main event, and then just after 10 pm, the funfair started, and the Challenger came out (Uysk). Once all that razzmatazz finished, Joshua, the World champion, came out to another dose of funfair. Announcements, fireworks and we were off. 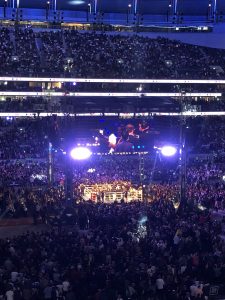 To cut a long story short, Oleksandr Usyk was crowd the new unified heavyweight world champion after dethroning Anthony Joshua with an incredible performance at our Tottenham stadium. Usyk put on a display in front of about 66,000, outclassing Joshua over 12 rounds and hurting the defending champion on several occasions. The scorecards showed 117-112, 116-112, 115-113, all for Usyk. Joshua’s second defeat in his boxing career. The New champion was and remained undefeated.

First of all, it was a brilliant experience. As you know, I am a season ticket holder at the new stadium, however, it was a totally different ball game. And the atmosphere was different as well. It sort of felt that I was at the Tottenham stadium, at the same time somewhere else (if that makes sense?). The only familiarity was the layout, many people there (I was in the premium section) I knew and, of course, the staff (as they were Tottenham staff). That all helped and added to the happening. The ring was in the centre of the pitch, and I was on the third tier, area 306 (I usually sat in area 311 for the football), in direct line with the ring/ centre half.

The atmosphere was out of this world, and the people near me were brilliant (a mixture of supporters/ boxing fans, not necessarily Tottenham supporters).

Unlike football, you could bring your beer to your seat. It was a  fantastical spectacle, and there were giant screens all around, including at the top of the ring) just in case you couldn’t focus on the ring area itself.

As for the fight itself, there was no doubt Usyk deserved to win. I don’t think anybody was in any doubt unless Usyk was going to be robbed (and it has been known in boxing).

I’ve been a boxing fan since the 60s but never been to a live fight. The closest I’ve ever been was when Ali beat Leon Spinks to recapture his world title (it was beamed over live from America, and I watched it at the Hammersmith Palais in 1978). And that was a great event/ day in itself, but this was a totally different ball game.

Once the boxing finished, I met a friend who went to my gym and gave him a lift home (he was good company to chat with). Dropped him off and got home at 2am.

I was fortunate to park where I did because any nearer – to the ground –  I would never have gotten out for at least a good few hours. Another bit of luck, instead of turning left to White Hart Lane (from the car park), I turned right and had a free and unobstructed drive home.

Three hours sleep (yes, only) and then picked up by Mel at 9.30 am to go to Arsenal/ Tottenham game.

Terry had a restaurant booked – for me, himself, Mel, Colin, and Ian) – near the Arsenal ground. To cut a long story short, I drunk more than the fishes and had eaten a three-course meal. Got to the ground, purchased my programme and in.

Once at my seat, I sat down only to start to feel tired and then drifted off. Suddenly woken by the roar of the crowd… thought it was us scoring and nearly jumped up to cheer, but quickly noticed the sullen expressions on peoples faces around me to realise it wasn’t us who scored. The drink was still having an effect, I closed my eyes again. Woke up and thought; when will it be half time, looked at the clock and noticed it showed 30 minutes were left to the end of the game. At least that half was better for us. Was my drunk induced sleep to my benefit or my ruin?

The game (a mixture of what I saw and the match of the day).

It seems Arsenal’s revival was helped by our decline over quite a few games in this London derby at Emirates Stadium.

The Gooners had propped up the table after three games while we were top; how things have changed. We were shambolic as they tore us to shreds in the first half.

We were a horror show before the break. We improved after the break, Kane bringing a good save from Aaron Ramsdale and wasting a good chance before Son pulled one back. Ramsdale spared Arsenal any late worry with another superb stop, touching Lucas Moura’s shot onto the bar.

The second-half’s introduction of Oliver Skipp and Emerson Royal for Dele Alli and Japhet Tanganga prompted an improvement of sorts after the break. But it was too little too late, and we did not deserve anything from our performance. The first half was an insult to us. Do I need to go on? We were shit, and after our first three winning games, we declined terribly, and I can’t see it getting any better any day soon. Even in our League Cup win over Wolves, we only scraped by because we won a penalty shoot-out. In my previous article, I did say I had this terrible feeling, and that feeling bore fruit.

Next up is NS Mura (Europa Conference), Villa and Newcastle in the league and then back to Europa conference. I see trouble ahead unless we start to buck our ideas up. How do we solve this problem? We can’t purchase, and I doubt Levy would anyway. Sacking the manager isn’t the answer, maybe sacking Levy is, but Turkey’s don’t vote for Christmas. Somebody said the only way to win a trophy is by getting relegated to the Championship and then win that league. Far fetched?

A fantastic weekend, but with mixed feelings.