Match Report: Spurs 2 Leeds United 1 (back from the brink!)

Our new manager secured his first Premier League win in charge as we staged a second-half comeback to beat Leeds. But in the first half, you could hear boos throughout the stadium, and when the players walked off at halftime, the boos became even more prevalent. We failed to manage a single shot on or off the target in a poor opening 45 minutes, with Leeds the far better side.

The day started off so confidently, and I even predicted a 4-1 win in my Preview blog with Harry getting a hat-trick. Of course, the score and hat trick never game, but the second half of the game did make us shout to exhaustion. Mel arrived at my house at 10.30 and left his car, then we drove in my car to Tottenham. Traffic was a bit better than previously where it took us 3 hours, this time around it took about 1 hour and 50 minutes.

Once I arrived, I parked up and went to the Spurs shop, made the usual purchase, and chatted to staff.

Even though Mel was a veteran season ticketholder, he jumped ship and became a Premium season ticket holder for the first time. I think it was the Manchester United game that his eyes were opened to the luxuries of Premium, and he was even given a tour by Hannah (Tottenham’s Premium accounts manager who looks after us) to wet his lips even more. The United game was a baptism of fire (we lost that game), but this game (Leeds) was a bit more easier on the eye.

I got through the turnstiles OK, but Mel had some teasing problems, and then we got through and got our programmes. Then up to three flights of stairs and to our seating area. I bought a bottle of Malbec (we eventually went through 5 bottles… but that was with eight of us) and plenty of food. 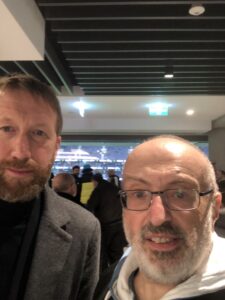 There was a guest in our lounge, yes, Harry Potter from the JK Rowlings films… and I got my photos taken with him (see picture) and I told him how much I enjoyed his movies… OK, a bit of an exaggeration… quite a bit of hyperbole, I’m afraid, as it wasn’t that “Harry Potter” but  Graham “Harry” Potter, the manager of Brighton… he certainly didn’t have his magic wand on Saturday against Villa, did he! Anyway, enough about JK Rowling’s stunts but back to the Conte story.

So once the baptism of fire was exhausted and the three hours were up, and everybody had arrived and given their predictions, it was off to our seats.

Back to the game…

Kalvin Phillips had an early free-kick saved by Hugo, and Adam Forshaw drove just wide before Leeds opened the scoring at halftime when Daniel James side kicked in Jack Harrison’s cross.

As I said, there were boos from the home crowd as the players left the pitch. In the interval, all we could hear was “Nuno was back” and “rubbish, utterly rubbish”. Nevertheless, I said that the second half would show Conte’s mettle. And it did, as the players were much improved after the restart, twice hitting the woodwork early on. Harry Kane, who had a quiet first half,  broke clear of the defence, and his powerful low effort shot under Illan Meslier and hit the base of the upright before Son heavily-deflected strike hit the crossbar.

But when the equaliser came, the crowd went berserk, and it came just before the hour mark when Pierre-Emile Hojbjerg curled into the far corner after good work by Lucas Moura. But it wasn’t over with that one goal, oh, no, we kept up the pressure, and the turnaround was complete in the 69th minute when Dier’s free-kick bounced off the wall and onto the post, and then Sergio Reguilon was there to tap in the rebound and score his first Premier League goal for us. The crowd erupted, and Conte got all emotional (as Italians do)… cheering the crowd on with his arms, they were gesticulating all over the place. Then we shut things down and closed out the game to secure our 7th placed League position, 4 points behind the Spammers in 4th. We are sixth points behind 3rd placed Liverpool, but still a lot of work to do. Or I should say Conte has a lot of work to do.

As for Leeds, they remain in 17th place and just two points above the relegation zone.

This was a game of two different contrasting halves.

When our new manager entered from the tunnel before the start of the game, our fans applauded him for his first league home game. Ironically that was the only cheer we got in the first half with boos replacing ovations.

Their Meslier was untroubled in his goal area as we tried for a shot on target. Kane, fresh from scoring seven goals for England, never looked like adding to that goal tally as he struggled to make an impact at club level. Leeds, however, looked like the team of last season as they attacked and kept the pressure on with precision and pace to put in a strong performance.

Then Conte did what he was paid to do at halftime, showed his tactical genius, stuck the magic wand up their arses, read the riot act, and then the game was suddenly turned on its head in the second half.

Yes, our players did look considerably different and alert, quicker on the ball, more focused and direct with their attacks. We could have won by a more significant margin, but for the ball hitting everywhere rather than going between the wooden posts. Son also sent a dipping strike just wide in the closing stages.

Of course, one victory (actually two victories and one draw) makes it a remarkable turnaround (after Nuno), however, I do believe we are finally getting our act together after Mourinho and Nuno. But there is still a lot of work to be done, and hopefully, in the January window, we will buy quality and get rid of some of the deadwood; Conte also needs to try to get the best out of wantaway Kane.

But full credit for Conte rectifying what was so wrong in the opening period augurs well for him, who has yet to taste defeat since replacing hapless Nuno.

As the whistle finally went, we stood and applauded the team and Conte and then made our way to the second floor for drinks (I didn’t partake as I was driving) and chatted with smiles all around. Eventually, Mel and myself finally left, and we got to my house/Mel’s car at 10 pm. I stayed up chatting to a friend and watched Match of the Day. Finally, the witching hour came, and to bed, it was.

Our next match is against Mura – away – on Thursday. I am supposed to be going (I’ve got my ticket), but we are still trying to sort out flights. Who knows what will happen at this moment in time… and then – if we go – we will have to deal with all of the paperwork for travelling and COVID tests.