Daniel Levy: I will die for you.

Well, not entirely did he say; I will die for you… but he did release a statement after the financial results for the 12 months ending June 2021, which I suppose could be read any which way you choose.

Despite the Club suffering a challenging financial year, our chairman Daniel Levy has promised that success on the pitch remains the Club’s number one priority. And I read that as being linked to Conte and Paratici coming to our Club.

Tottenham Hotspur FC released its financial results for the 12 months ending June 2021, and their revenue was down by £40.5m from June 2020. The Club are mainly down due to matchday revenue falling from £94.5m in the previous year to £1.9m because of the pandemic. In layman’s terms, Levy/Totteneham’s debts have increased from £605m the year to £706m at the end of this financial year.

Then Daniel came out and posted a message on the club website and insisted that the losses posted were because of the challenges of the pandemic. Still, he then stated that Tottenham has “emerged from the pandemic financially stable”. He also added that bringing success on the pitch is an integral part of the Club’s goals and pledged investment to help achieve that.

Levy said: “Going forward, our strategy is clear – to drive and generate revenues to invest in all of our football activities. Football success, in turn, supports the growth of our Club, our fanbase and consequently wider commercial opportunities and partnerships, which then deliver further revenue to reinvest in football – the virtuous, sustainable circle on which our Club model is based. Having delivered our training centre, The Lodge and stadium, we shall not stand still, we shall continue to innovate and ensure the most exceptional player, fan and visitor experiences. Our building blocks for the future success of the Club are now firmly in place.” 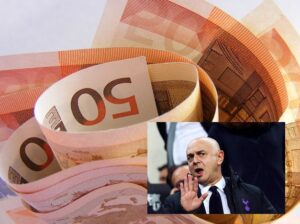 Levy has been under attack from the fans, critics, and the Tottenham Trust for not investing in the team (and rightly so). Still, the shambles with Mourinho and Nuno seems to have forced him to relook at his approach and the best statement he could have sent out – to show he has changed – was to appoint Conte. The next step will be to give him cash for the transfer window so that our manager can energize the team.

The COVID came at the most awful time for Levy as the Club had just moved into the new stadium. However, the Club have come out of it somewhat unscathed.

I have criticized Levy and Lewis because they failed to invest in the team; however, I have constantly congratulated them for their business part of the building of the Tottenham company. They had built a cash-cow machine when they replaced the old White Hart Lane stadium with a new jingling cash register amphitheatre.

We also must give Levy credit for realizing that he had failed to oversee the team to success on the field. Still, by appointing Paratici and Conte, he is now prepared to learn the lessons from past failures and bring the best into the Club to deliver silverware.

As they say, the proof of the pudding is in the eating. So, over to you Levy, Paratci and Conte. We’ll hold off that golden statue of Levy at the stadium entrance for a little longer (oh, we laugh! At least humour makes things a little bit more tolerable!)