Match Report: Spurs 2 Fulham 1 (and still third in the league)

Yes, we are still third in the league, a point behind Woolwich; but they’ve got United today (away), so we are all United supporters, at least while they play the Gooners this Sunday (4th Sept). City and the Scousers got a draw, while the Yankee-Chelski hoodwinked their way to victory over the Jellied-eeled-bubble-blowing-Spammers.

Before I get on to the match, I’ve had a few comments about me banging on about my disability (even though temporary); “Yes, we get it… you are with crutches”, etc., some shout! I sympathise with those that say, “enough, already!”. At the same time, others are interested in how I manage my disability and how other clubs treat me. It is a case of “Don’t mention the disability, I did, but I think I got away with it” (paraphrasing Fawlty Towers/ the Germans).

I have quite a few thousand people who read my article; it goes all over the world… however, a little less (yes, I get it), unless something really exciting happens, like… going through my journeys, suddenly I stepped on a mine. My disabled leg gets blown off…

Hopefully, we can tolerate a bit of black humour… yes, even to the detrimental effect of my leg (oh, we all laughed!). [Those traumatised by the image of blood and guts of my imaginary leg being blown off… I apologise… reassurance can be obtained by contacting the Samaritans.]

Now for something completely different (I say this to the tune of Monty Python). “What is Monty Python?”  I hear some of you query. Ask your dads… or even your mums… unless you are old enough yourselves!

We had most of the possession, not all, but enough… we had ten shots on goal to their three. We had ten corners to their three… we were far the better side and should have at least been 5-1 up. Happy? Well, we are still undefeated like Woolwich (let us hope United change that) and City (Good on Villa for getting a draw). In Conte, we must trust. And, of course, he has to bed the new players in, while simultaneously trying to motivate Son. So… has he done well?

We maintained our unbeaten start to the season as we beat the Cottagers with goals from Pierre-Emile Hojbjerg and Harry Kane.

A late strike from Alexander Mitrovic gave Fulham a chance, but in the end, Marco Silva’s side suffered a second-season loss.

Let us be honest, we threatened to score practically every time we came forward and had ample opportunity to extend our lead further, firing off 23 shots, 10 of which were on target.

Full credit to Fulham, their stubborn defence were held to just two goals.

Hojbjerg fired into the bottom corner after some nifty passing in the Cottager’s box; opening the scoring before Kane headed home to double our lead after 75 minutes.

The Craven Cottagers had been completely unable to get into the game for most of the 90 minutes, with Mitrovic’s threat nullified until his 83rd-minute goal – his sixth of the season.

Richarlison, making his first start since joining from Everton in the summer, looked lively and had a goal disallowed for offside in the game’s final minutes. And he got booked for his troubles (well, for taking his shirt off and showing his body to the world… I bet the powers that are won’t get that card rescinded). As for taking his shirt off, I tried that once, and all I got was laughter… swiftly moving on…

Our manager  Conte is not worried about goalless Son… I bet he isn’t! Then again, with what we’ve got and are still undefeated… carrying on, Regardless… I suppose.

In our game against the Jellied-eeled-Bubblers, we lacked a cutting edge in our 1-1 draw; with so many chances missed against the Cottagers, it was possible that the same scenario could play out again. It didn’t… but we must be warned and careful!

Son saw an early goal written off when Kane was offside.

We weren’t really threatened until Mitrovic’s late goal, and Leno was called into action eight times, the most saves he has made in a Premier League game.

Yes, criticism has been flying around by Spurs supporters and pundits, but we must remember this statistic. We are undefeated in our last 12 Premier League games and have a 100% home record this season. Only three clubs are still undefeated: City, Woolwich and us.

I know it is early days (only five or six games in), but the top three seem to be breaking away from the others.

We will get a better picture next weekend when we face City, away… Fulham take on the Yankee-Chelski’s, while Liverpool are at home to Wolves. On Sunday, Woolwich take on the Toffee chewers of Liverpool, at home. 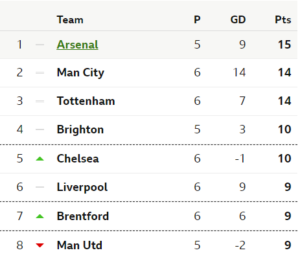 We are third in the league, but equal on points with second-placed City… the game this Saturday will be mouthwatering. And I’ve got my ticket.

A lady said to me yesterday. “Excuse me, what do you like to be called handicapped, disabled or physically challenged? I politely said, “Glenn will be fine, thanks.” OK, I pinched that quote and paraphrased it. Nevertheless, I’ve often been called “mentally challenged” and/ or “delusional.” The truth of the matter is, once you put your thoughts to paper, you are open to the elements. In other words, all criticisms are welcome (the good, the bad and the ugly). Without differences, criticism etc., we would just be in a glass bubble, only having the echo of one’s voice reverberating round and round, with no light shining in.

2 thoughts on “Match Report: Spurs 2 Fulham 1 (and still third in the league)”