Anthony Joshua’ to box at our stadium plus Boxing at WHL (a history).

Our  Tottenham Hotspur Stadium is going to host champion Anthony Joshua’s next fight against Oleksandr Usyk. The fight is expected to take place in September of this year.

Joshua was scheduled to fight Kubrat Pulev in a heavyweight bought in June of last year, but sadly this match had to be rescheduled for December at the SSE Arena). 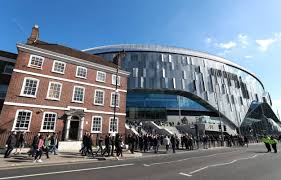 Other events at the Tottenham Stadium 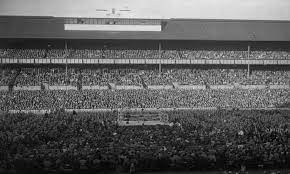 Even though boxing will be a first for our new stadium, it isn’t the first at N17, Tottenham. For the first match, we have to travel back to JUNE 20, 1942: when the Legendary British boxer ‘Fearless’ Freddie Mills knocked out Len Harvey in a wartime fight at White Hart Lane. It was the first of four fights at the Lane.

Mills stunned a crowd of 30,000 at Tottenham Hotspur Football Club’s stadium by winning the British light heavyweight title. In the second round, Mills put the 34-year-old seasoned champion down for a count of nine after a powerful left hook. When Harvey got up, Mills hit him with a left uppercut, forcing him through the ropes and knocking him out.

British Pathé cameras caught one of the greatest moments in boxing during the match.

In July 1945, the second match was when Woodcock defeated the current champion Jack London to take the British and Empire heavyweight titles. Woodcock won by a knockout in round six after having London down three times in that round. 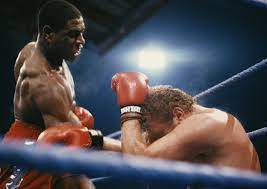 The third match saw Frank Bruno take a significant step towards a showdown with world heavyweight champion Mike Tyson when he beat Joe Bugner. This match was on the October 24 1987.

The last boxing match at White Hart Lane was the famous or I should say tragic Chris Eubank and Michael Watson WBO super-middleweight champion fight, which took place on September 21, 1991. In the famous battle, Watson suffered a near-fatal injury. 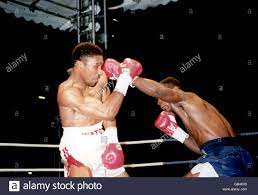 With Watson still visibly shaken in the twelfth round, the fight was stopped with Watson under a flurry of punches from Eubank. Minutes after the fight, Watson collapsed in his corner of the ring; there was no ambulance or paramedic at the event.  A total of 28 minutes elapsed before Watson received treatment in a hospital neurosurgical unit.

As a boxing fan, I hope to go to this momentous boxing match at our new stadium. I was supposed to go to the first fight at the stadium, but sadly it was cancelled. The closest I’ve been to a boxing match was when I went to the Hammersmith Palais in 1978 to see – beamed over live (in black & white) – Muhammad Alli regain his world title for the third time by beating Leon Spinks. Sadly, both are now dead. It was a brilliant evening. The match was shown through the night, and I believe we left the Palais at about 4.30 am. I think I was living in Barons Court then.

This article makes a change from football, however, it is associated with our club and history.

GOOD NEWS! Thanks to everybody reading and commenting on our posts and Facebook pages, we are proud to announce that we have been featured in the Top 25 Tottenham blogs at blog.feedspot. com Click the link “HERE” to see more.

Hi all, if you are a Spurs supporter like me, you will be interested in the book “My Eyes Have Seen the Glory”. As an avid reader of Spurs history, myself, this book stands on the shoulders of them all. It has interviews with 40 great Spurs legends of WHL. It is written by Toby Benjamin & Alan Fisher. And it has a forward by the great Gary Mabbutt MBE. Read my book review below. Whether au fait with our history or not, this book is a must to any Spurs fans. To read more, click below.