From Ilfracombe to United and back; 10 hours of driving

Should we be surprised at our loss to United? We seem to have done well by beating City and Leeds and even poorly Everton, then get knocked out of the FA Cup by Middlesbrough and pounded in the league by struggling Burnley, Southampton and Chelsea… no consistency. We will probably beat Brighton on Wednesday and then sink against the spammers, the way things are unravelling. No wonder the fans, Conte, and the critics are frustrated with the team’s performance.

My weekend started with a trip to Ilfracombe (staying at Ilfracombe Holiday Park). This was on Friday, arriving at 3pm. In the evening, Janette and I had a good meal at a local Inn; then the next day I left at 9 am for Manchester, leaving Janette to meet friends, having beach fun etc. At the same time, I suffered for club and team with a five-hour drive to United’s ground. About 3 hours away from the ground I was caught in a traffic jam, then once cleared, my car broke down some miles away from the ground… I had to wait for the AA. While waiting, Janette told me the fabulous day she was having back in Ilfracombe, but she sympathised with me while at the same time walking on the beach with my spectre by her side. If you can’t be there in person, then sending telepathic images to be by her side doesn’t go amiss! At least Janette had more fun than I did… even if it was on occasions with an apparition (well… that is the way I tell it!).

The AA mechanic put things right, so I was off to my late appointment and hopefully witness the continuation of our resurrection from possible calamity!

To cut a long story short, I arrived at Old Trafford late, couldn’t see Mel or any of the others; just sat through a painful game before having another five our trek back to Ilfracombe, getting there at 3.30 in the morning.

While I was watching the game, Janette kept me updated on her take on how things were going – as she watched live at the Wellington Arms in Ilfracombe, thinking, “What a mug, he could have stayed with me and saved himself pain watching Spurs being predictable again”. But there you go, we all must suffer for our loyalty… supporting Spurs is a one-way trip under Daniel Levy’s reign.

Anyway… I am running ahead of myself, the game; “Spursy”.

Cristiano Ronaldo scored his first Manchester United hat-trick in 14 years as we were defeated at Old Trafford. He put United ahead twice before heading home the winner from Alex Telles’ corner nine minutes before the final whistle was blown. However, they didn’t have it all their own way, as Harry Kane got a penalty and United’s Harry Maguire then decided to help us out with a goal of his own (into his own net).

The United win moves them back into the top four and keeps us in seventh.

Our past seven results have alternated between wins and defeats – with three victories punctuating four losses.

Having gone behind, we got back into the game; Kane drove home from the spot-kick after Telles had handled in the area. But how we went 2-1 down three minutes later highlighted our deficiencies, with Reguilon switching off at times. We got back into the game a second time and deserved to, even if Maguire scored for us.

With our inconsistency, could any of our fans really believe that we could genuinely overhaul the Gooners to seal a top-four spot even if, mathematically, we still have a better chance of doing so than United?

After the game, as I said, a five-hour journey back to Ilfracombe Holiday Park, getting there at 3.30 in the morning. What a “Spursy” day all around!. You can imagine who was the one thinking who was the numpty that night (sorry, morning!). But at least I had a cup of tea and a couple of glasses of wine waiting for me (yes, even at that time of morning!). With sympathy, Janette listened to me in some form of understanding, waffling on about how things can be very trying supporting Spurs).

At least I had a good weekend, part from the 10 hours of travelling from Ilfrecambe to United and back again on Saturday. Sunday night ended with an excellent Italia meal.

Left Monday morning and got back to Cheltenham at 12.30 pm. 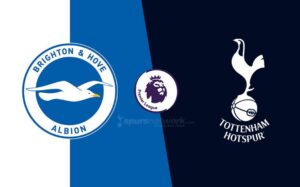 Let us hope this game goes better than our game against United at Old Trafford.

Both Brighton and ourselves will aim to bounce back from our defeats on Wednesday at the Amex Stadium. The Seagulls were beaten 2-0 against Liverpool, while United sunk us 3-2 over the weekend.

Our inconsistency under Conte does not look like ending anytime soon, as we enter the midweek round of fixtures.

Our games in hand must be taken into account, but we have now overseen four defeats from the last six away from home in all competitions.

We eased to a 3-1 win over the Seagulls in the FA Cup just last month. Still, Brighton have won the previous two Premier League meetings between the sides at the Amex Stadium without conceding and may fancy their chances against our hit and miss “spursy” days.

Adam Lallana lasted just eight minutes against his former club as a substitute before coming off with a suspected hamstring issue, and he will likely miss out here. Adam Webster has an outside chance of being fit for Wednesday.

Jakub Moder, Pascal Gross and the fit-again Enock Mwepu are all ready to freshen up the Seagulls’ midfield, while Shane Duffy could return.

Oliver Skipp (groin) and Japhet Tanganga (knee) do not seem to be coming back anytime soon. At the same time, Ryan Sessegnon’s muscular issue will likely keep him out until after the international break.

We did not pick up any fresh concerns at Old Trafford, so we are unlikely to consider many changes despite the defeat, with Sergio Reguilon deputising for Sessegnon on the left.

Tired legs could see Emerson Royal, Lucas Moura, and Steven Bergwijn handed opportunities to impress from the start. Dejan Kulusevski will not want to lose his place.

Despite our win-loss-win-loss in recent weeks, we have done well in finding the back of the net, which does not bode well for Brighton and their leaky defence. Granted, Brighton have become a bit of a bogey team for us on the road in recent years, but after claiming a 3-1 win in the cup last month, we can see lightning striking twice as we try to reignite our  Champions League challenge (again).