Before the match, I talked to other Spurs supporters at Brighton’s ground, and we all said – in unison – that Brighton had lost 5 games in a row, knowing Spurs, they will probably win this one. They didn’t; we then continued with, if not against Brighton then maybe at home to the Spammers. Of course, we are hoping for a Spurs win, but our “Spursy” tag sticks to us like glue. We beat City, Everton, Leeds and then get throttled by Middlesbrough in the FA Cup and in the league by the likes of Struggling Burnley, United, Southampton etc. Even Roman Abramovich’s Russian Putin boys – Chelski – beat us four times this season (but to be fair, that was with ill-gotten gains).

Mel picked me up for this match at home, and we travelled to Brighton Racecourse and caught their park and ride to the ground; reverse that and that was how we got home… just after the witching hour.

A moan; I don’t understand why clubs have Stewards, as people sat where they liked, blocked gangways etc., I can see that one day a serious incident happening… until then, the authorities just ignore the potential hazards. I have not just witnessed this at Brighton but at all away football games. Just like Hillsborough, the warning signs were there but ignored until deaths started piling up. And I’ve been writing about this for years.

Antonio Conte says Harry Kane “deserves to win something” after scoring against Brighton. He wasn’t the only one who “deserved” something; our long-suffering fans – me included – have been waiting for a Trophy – a serious cup – since Levy took over. But all we got from him is a wealth making stadium – not for the benefit of the squad –  but for our director and owner to get more comfortable from the money coming into our club. Something has to change!

Kane’s had his seventh goal in six games, thus reigniting our top-four hopes by condemning the seagulls to a sixth successive Premier League defeat. That goal also ensured that he had scored more goals away from home (95) in the competition than any other player – and lifted him above Frank Lampard into fifth, with 178 goals, on the all-time list of Premier League scorers.

We did win easily, and I am sure that Conte can see hope in going forward, but this was against struggling Brighton, who had not won a game in five ( now six). By the time Kane had driven a low effort past Robert Sanchez, we were well in control. Cristian Romero had earlier put us in front, deflecting in Dejan Kulusevski’s shot past the powerless Brighton goalkeeper and into the bottom left corner.

Our result against the Seagulls moves us up to seventh in the table with 48 points, three points adrift of fourth-placed Arsenal having played a game more. We are also two points behind fifth-placed Manchester United, level on points with West Ham and have a game in hand on both. We face the spammers this Sunday, and if we beat them, we will go up to fifth. We could also go above Arsenal if Villa beat them this Saturday and we scored more than three goals. As for United, they are not playing this weekend. So this could be an eventful weekend for us… let us hope so… we deserve some luck thrown our way.

According to media reports, Conte had challenged his senior players to help deliver Champions League. It should have been in their nature as professional players to fight for top honours. Did he really need to challenge them?

As for Brighton, their dismal run continues, but I can’t see them going down. There are worse clubs in the league than Brighton. I think it will be Norwich, Burnley and Watford. Hopefully, City will win the league with Liverpool second and Chelsea third. As for the fourth spot; let us hope it is us!

So that is that, we now move on to the weekend and our game against the wet bubble-blowing spammers at our stadium. 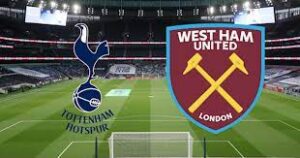 Even though the Spammers beat Villa this weekend, they were previously beaten by Liverpool and Southampton. They are currently sitting sixth in the league, one place above us, but on the same points. And we have a game in hand over them.

Oliver Skipp (groin) and Japhet Tanganga (knee) are not ready to return. At the same time, Ryan Sessegnon’s muscular issue will likely keep him out.

We’ve still got to play Arsenal. I know I said this before the United game, but we could seriously challenge for a top-four place if we can beat the Spammers. So nothing is over until the fat waddling penguin stops singing.

I can’t predict a Spammers win, however, we still haven’t thrown off the “Spursy” tag, so anything could happen… just toss a coin in the air and see which way it lands… nevertheless, I am going for a 3-1 win.

Black Arms bands will be worn (along with a minute’s silence) by the players this Sunday.

Yes, a minutes silence, but not because Putin’s Russian supporter Abramovich had his life-blood (read money) severed from his Russian creation (Chelski)… those rumours are farfetched (and do we care anyway… not at all! other than it will show Cheslski’s true colours!)… but because of the sad passing of Tony Marchi, our former great player.

A former captain of the Club from the 1950s and part of our 1961 Football League and 1963 European Cup Winners’ Cup-winning squads, Tony Marchi, passed away at Broomfield Hospital in Chelmsford on Tuesday evening (15 March). He was 89. He was born in Edmonton on 21 January, 1933; Tony joined Spurs as a junior player in the late 1940s and made his first-team debut as a 17-year-old under Arthur Rowe in a Second Division match against Grimsby Town at White Hart Lane in April, 1950.

He will be sadly missed. Please stand in tribute…

…and probably give a little wink in the satisfaction that Putin’s Abramovich has finally been caught-out and forced HIS Russian Chelski Blues to be left rudderless. And may it continue until the eventual sinking of this Mary Celeste!